I’m excited about this week’s Streaming Saturday. The reason I started this blog was because of my fascination with Netflix’s dive into original programming. One of my first posts was about how Netflix could be a game changer for the television industry. I stand by that assessment. And now that I’ve watched Netflix’s flagship series House of Cards, I can officially recommend it to the internet.

I won’t go into many details since I’m working on a bigger review of the first season and want to save my thoughts for that. What I will say is House of Cards is a political drama featuring Kevin Spacey as Majority Whip Francis Underwood. He’s a fascinatingly dark character. After he was turned away for the position of Secretary of State, Frank sets out on a plan of manipulation and power to get what he wants. He’s brutal, calculating and a joy to watch.

Netflix spent $100 million for the first two seasons of House of Cards. Season two is currently shooting with an expected release date of early 2014. Between the critical acclaim and early Emmy buzz the show has earned already, I’m hopeful it will be going for a while. Judging from the magnificent first season, Netflix could easily become the next HBO. I do not say that lightly. 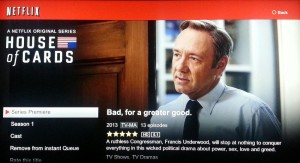 Watch House of Cards on Netflix.

Despite it being a Netflix series and, by definition, available to stream, I think I’m going to collect the blu-rays. David Fincher directed the first two episodes of the series and set a beautiful tone for the series that is carried throughout the first season by an assortment of directors (including Joel Schumacher, oddly enough). That and the prospect of juicy special features make me excited to own this series. The DVD and Bu-Ray sets will be released on June 11th.