How the Mighty Have Fallen: Dexter On Its Last Lap, A Fan’s Lament [Obsessive Friends: Mike]

OBSESSIVE NOTE: My friend Mike is by far the biggest Dexter fan I know. As such, he has kindly offered to contribute his thoughts on the series’ past, present and increasingly limited future. You can follow him on Twitter at @IAmMikeWhite.

“The mask is slipping,” a line from a second season episode of Showtime’s long running mega-hit  Dexter, is forever tattooed on the side of my foot – a constant reminder of one of my favorite episodes in one of my favorite seasons of one of my favorite shows of all time, and now a reminder of how far the show has fallen. I got the tattoo (during Dexter’s fourth season) as, both an homage to a fantastic show, and a way to say that good things happen when we reveal to people who we really are; for better or worse. I also really liked Michael C. Hall’s reading of the line. But man, maybe Dexter should have left the mask on a little longer…

Dexter, now in the smack-dab middle of its final season, is truly limping toward the finish line. It’s ratings are still tops over at Showtime, but more people watching the show doesn’t mean that old fans are liking what they see, and the show is severely showing its age.

I identify two major drops in quality for the series. Dexter hit its peak in the fourth season finale with the death of Dexter’s wife, Rita, at the hands of John 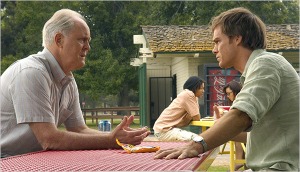 Lithgow’s Trinity Killer. It was unexpected, but completely earned; the emotional and storytelling implications of which were heavy.

The fifth season failed to keep the promises made by the stellar fourth. It was underwhelming to say the least. While the fallout of Rita’s death was addressed, and the first few episodes were compelling, the middle four episodes fell into a deep mid-season rut – a trend that Dexter would maintain every season since. The fifth season was plagued with plot holes. It ignored prior character development, and featured a lackluster main villain or “big bad” as the showrunners are wont to call it. The season finale was a disaster filled with contrivances and one particularly offensive disservice to a great character. Deb, Dexter’s sister, is a great cop, but she let the two vigilantes she is trying to catch (one of which is Dexter, unbeknownst to her) free. Jennifer Carpenter, the actress who plays Deb, has even mentioned in interviews that she had trouble with the decision.

The other main drop in quality is the entirety of season six. Aside from the game-changer ending in which Deb discovers Dexter mid-kill, 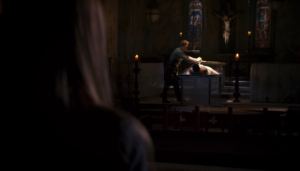 the entire season could be forgotten both because it’s bad, and because there is absolutely no character development. The season was touted as the one where Dexter struggles with his thoughts on religion, but he winds up in the same place he started the season.

It should be noted that these drops in quality coincide with dramatic changes behind the scenes. Sara Colleton is the only remaining producer from season one. After season four (remember: the peak) executive producer and showrunner Clyde Phillips as well as head writer Melissa Rosenberg left the show. Chip Johannessen took over showrunner duties for season five, and was replaced by Scott Buck, who remains in charge.

It’s clear that Scott Buck has had a vision from the start of his tenure, and all three of his seasons can be linked by tone, but more obviously by the fact that the relationship between Dexter and Deb has become the focus of the show. The seventh season was actually pretty good. It dealt, in real-time, with Deb reacting to the fact that her brother is The Bay Harbor Butcher, but after the surprise seventh season, here at the end, we find it’s the same old hat. What happened?

At the time of this writing, there are five episodes left of Dexter. So, why is it so ho-hum? Why am I now embarrassed to admit that I still watch the show religiously? How come when I watch these last episodes, I’m really only counting down until the next episode of Breaking Bad? 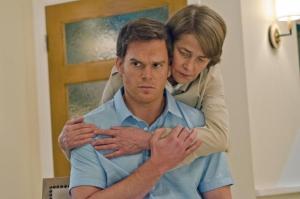 The eighth and final season came out the gate running. The addition of Charlotte Rampling as Dr. Evelyn Vogel, a psychiatrist who specializes in serial killers was a smart one. We learn (in an irksome, but ultimately forgivable ret-con) that Dr. Vogel helped Harry Morgan, Dexter’s adoptive father, invent the “code” by which Dexter lives and kills. She has come to ask Dexter for help in tracking down a possible former patient that is threatening her. The premise is interesting enough, and Dexter’s new internal conflict is fresh, albeit surprisingly late. Did Harry and Vogel do the right thing for young Dexter? It’s a question that should have been addressed this deeply much earlier in the show, but I’m glad it’s here. Vogel is also here to help Deb and Dexter reconcile after Deb spun out of control in response to her killing an innocent to save Dexter. Again, this was interesting. The problem is, after Vogel’s threat is disposed of, and Deb and Dexter make nice, Vogel’s presence in the latest episodes seems useless.

The show has taken other liberties with logic this season that I won’t go into, but worse, for three episodes now, I’ve been left asking, “so, what?” With five episodes left of the entire series, the intensity should be ratcheting up at a rate unlike any season before, but were left with the same ol’ mid-season slump. The return of Dexter’s serial killer girlfriend Hannah

poses interesting problems for both Dexter and Deb, but what end are these means going to produce? This should be the season where Miami Metro finds Dexter out, this should be where Deb has to kill Dexter. We should be worried about Harrison, Dexter’s son, but right now, and I’ll repeat for emphasis, with FIVE episodes left, none of these are threats, whatsoever. I’ll compare again to Breaking Bad. In the first episode of its last eight, the drama was tighter than ever, and while I have no idea how the show will end, we have an idea of how it might. We have possibilities, and more importantly than anything, we have a threat. By what does Dexter or Dexter have to be threatened? I hope that the next episode or two give us something. If not, I’ll have a lot of explaining to do every time someone sees the blood spatter font inscribed on my foot.

OBSESSIVE NOTE: You can read more of Mike’s contributions to the site here. You can also follow him on Twitter @IAmMikeWhite and hear him on several episodes of The Obsessive Viewer Podcast. Don’t forget to like us on Facebook.

13 responses to “How the Mighty Have Fallen: Dexter On Its Last Lap, A Fan’s Lament [Obsessive Friends: Mike]”