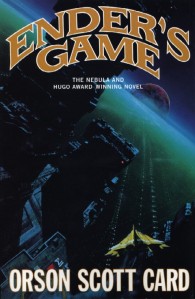 Set in Earth’s future, young Ender Wiggin is trained and groomed to become the leader of Earth’s military attack against the alien “Buggers.” Ender is put through a series of tests that include several intense battles in zero gravity rooms. Ender’s final test is to display his tactical genius in a simulation against the Buggers, but is it really just a game? Writer’s note: Ender’s Game has been published in several different editions with more covers than I can count. The picture above is the version of the cover of the Ender’s Game book that I read. END_OF_DOCUMENT_TOKEN_TO_BE_REPLACED