Tag Archives: The Story of the Greatest Fan Film Ever Made 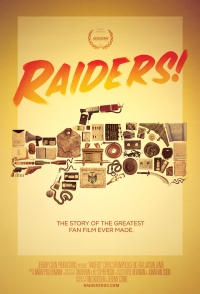 Raiders! The Story of the Greatest Fan Film Ever Made tells the story of three kids in 1982 who set out to create a shot for shot remake of Raiders of the Lost Ark in Mississippi. The project lasted seven years and all that was left to film was one crucial scene. Now over thirty years later, the men have reunited to complete their remake of Steven Spielberg’s iconic movie.