If you start watching today, Netflix can provide you with an enjoyable Christmas classic each day until the holiday is over. Maybe “classic” is a stretch for some of them, but they will all pull at your heart-strings and put you in the Christmas mood. Without further adieu, your Five Days of Obsessive Viewer Christmas:

Let me start out this recommendation by saying you should put the little ones to bed before turning on Love Actually. It’s a great movie for getting into the holiday spirit, but along the way it drops more F-bombs than you’d expect from a rom-com and it shows quite a bit of skin as well. I’m also recommending you watch this first because it’s the least Christmasy of the bunch.

The movie takes place on and around Christmas, but it’s not necessarily ABOUT Christmas. The movie is about finding love in all of it’s different variations. One guy just wants to get laid so he goes to America to find some easy girls. Liam Neeson plays a character trying to connect with his stepson after his mother dies, and does so by helping him find his own true love. My personal favorite is Hugh Grant playing the prime minister of England who is looking for love, and finally finds it in a new staffer.

You could easily qualify this movie as a “Chick Flick.” It’s definitely that, but it has so much to offer any kind of viewer. There are several depictions of endearing love for the sappy ladies, but there’s nudity and cursing for the guys. It has a fantastic cast, who all give wonderful, charming performances. I don’t want to reduce the movie to being just stereotypical rom-com fare. It’s very heartwarming and hilarious, and it will make you long for a special someone to share the holiday with. 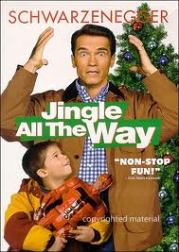 Sunday: Jingle All the Way

It’s weird recommending an Arnold Schwarzenegger movie for Christmas. When you think of Arnold you think of muscle, explosions, action and odd enunciation. Jingle All the Way has a bit of that, but at it’s core is a family man trying to give his son a great Christmas.

Be prepared for some cheesiness. There are scenes involving a functioning jet-pack, a brawling group of Santas and a partially CGI reindeer wrecking a house. It is a silly movie. It’s also a pretty funny movie, though. Phil Hartman delivers a hilarious performance as an over-achieving single dad who makes Arnold look like a fool, and Sinbad plays a desperate mailman who battles Arnold for the latest hot toy that is nowhere to be found.

The movie makes a commentary about how much pressure we put on ourselves and the members of our family around Christmas. In the end we discover that sometimes just being together is all we need for a great Christmas. This is definitely a movie you can watch with the kids, and there is some stuff for the adults to enjoy as well. 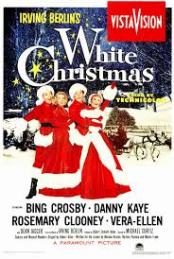 I talked about White Christmas in our Christmas on the Screen episode of the podcast yesterday. It has almost taken over It’s a Wonderful Life as my favorite Christmas movie. The only reason that I’m recommending it as a Christmas Eve Eve viewing is because I realize not everyone is a big fan of musicals. Though, Christmas kind of goes hand in hand with carols. Even if you’re not big on musicals you’ll probably like White Christmas.

Irving Berlin made a name for himself as a composer with the song White Christmas and would go on to influence music in film till the day he died. If you look at his IMDB page he has over 500 credits as a musician. That is pretty much unheard of. There’s a reason why Irving Berlin was so popular. He made some of the most memorable songs in film history, and, in my opinion, his best work is White Christmas.

The movie stars Bing Crosby, Danny Kaye, Rosemary Clooney and Vera-Ellen. All four stars deliver wonderful performances and have a chemistry that can only develop between dedicated people who spend hours and hours singing and dancing together. I especially love Bing Crosby and Danny Kaye. They feel like old friends. There’s a good chance you will fall in love with these characters if you give this movie a watch.

John Hughes’ Christmas Vacation is what I consider to be one of the most quotable films ever made. Chevy Chase and Randy Quaid deliver some of the most memorable Christmas themed lines; my personal favorite being: “SH*TTER WAS FULL!” I mean, does it get any better than that?

Sorry, I’m assuming that you have all seen this movie before. It’s just so perfect that you’d be crazy not to watch it. If you’re unfamiliar, the movie takes place at the Griswold family home in Chicago, Illinois during the Christmas season. Clark W. wants to host Christmas for the whole family. Along the way, Clark, the ultimate family man, finds himself in the crazy high-jinx associated with the Vacation franchise. The movie strikes a perfect balance of not being over the top or too subtle. It’s just crazy enough to be lovable.

I really can’t say enough good things about the movie. It is the best Christmas comedy by far, but I think it provides a genuine Christmas spirit as well. So, make sure this movie becomes part of your holiday season every year, or you might piss your pants and forget who you are for a half hour or so.

Robert Zemeckis spent the entirety of the 2000s decade working with motion capture animation. I respect his dedication to the genre. He made some interesting films with it, but I think his best one was his first one. I remember being blown away by Tom Hanks’ likeness and voice being used so diversely. It looked absolutely remarkable and he made each character so unique. I never could have pictured Hanks playing Santa Claus, but, honestly, I think his performance as Santa in this movie is one of my favorite iterations of the character.

Now, there are a lot of people out there who couldn’t get behind this movie because of the book. The Polar Express by Chris Van Allsburg had a massive impact on my childhood. I would literally have dreams inspired by it. I think it’s a book that every child should have the opportunity to read. Of course, the movie ended up being much different than the book. The first time I saw the movie I was a bit perturbed by this, but since I’ve seen it a few times it really grew on me. The book is actually less dedicated to Christmas than the movie. The train ride that the children take to the North Pole travels to several magical places before it’s final destination. It’s a much longer journey and it involves several places that have nothing to do with Christmas, so I understand those parts being removed. I think it’s possible to be a fan of both the book and the movie.

I would be remiss if I didn’t mention the music in this film. The Polar Express soundtrack has become a staple of my Christmas music throughout December. They chose to make a lot of original music instead of recycling classic Christmas carols. My favorite is the title track sang by Josh Groban called “Believe.” It is such a beautiful example of childlike imagination and Christmas spirit. It often makes me tear up when I hear it.

The Polar Express is a magical allegory for the Christmas holiday. If you have yet to see it; do yourself a favor and watch it on a snowy Christmas Day and take your imagination on a journey.

I hope these recommendations were helpful to you. Don’t feel compelled to strictly stick to it. I just think all of these movies are worth your time if you want to commit to the Christmas spirit. It just happened to work out that there were five great choices that coincide with Streaming Saturday.

Have a very Merry Christmas!