Last year, in celebration of Netflix’s high-profile jump into original programming, I wrote a review of the first season of House of Cards. I loved it. It quickly became one of my favorite shows on television; a statement I find humorous considering it isn’t on conventional television.

As such, I have been very eagerly awaiting the February 14th premiere of season 2 of this groundbreaking political thriller. As a result of my eagerness, I’ve decided to review each episode of season 2 individually, as I view them.

Fair warning: There may be spoilers within these reviews. If and when these reviews have spoilers, I will clearly mark them so that you can avoid them. But I want to clearly state here that these posts are intended to be a commentary on what I’m watching. If you are reading these posts because you are on the fence about the show, you should stop reading and just watch it!

The first episode of season two begins right where season 1 left off. We see a dark park lit by lamps, one of which is suspiciously dark. Then the diabolical power-hungry couple that is the focus of this show, Frank and Claire Underwood, appears. They conclude the run they began at the end of last season’s finale and then come home to a whole new set of problems.

The first season concluded with the journalistic triumvirate of Zoe Barnes, Lucas Goodwin and Janine Skorsky slowly unraveling the truth about Frank’s more nefarious actions while the soon-to-be confirmed V.P.’s henchman Doug Stamper is hot on their trail. This premiere continues that plotline and takes it to some shocking places.

This episode was all about re-establishing Francis Underwood as the ruthless antihero that we fell in love with last season. That is, if love can be defined as “an unsettling alliance where the audience is at the whim of one who is potentially a madman with power.” The series definitely re-established his ruthlessness but it did so against the backdrop of his birthday, which illuminated the finer points of the character for me.

There’s a scene early in the episode where Frank’s secretary tells him birthday cards and presents are arriving. Frank tells her to inventory the presents and dump the cards. This scene really painted Frank in a light for me that is unique from other antihero protagonists.

Until now, I viewed Frank as an antihero who still had things that brought happiness to him. He had Freddy’s barbecue, his friends at his alma mater, his wife and his confidant Doug. Here he’s throwing away outside affection. It initially made me think he’s an unhappy man who is maybe a little too far gone. But what I’m realizing the more I think about it is that Frank is an extremely guarded man. It’s something he needs to be, given the games he plays.

And those games are still in full effect. In this episode, we get to see them play out on both sides of the Underwoods’ marriage. 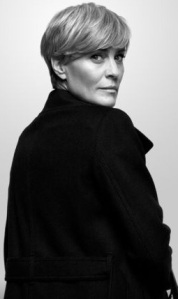 A considerable amount of screen time is spent on Claire Underwood. There’s an interesting dichotomy in this episode between Claire’s consultations with her fertility doctor and her battle with Gillian Cole, the pregnant woman suing Claire’s company for wrongful termination.

We are given a view into a more human side of Claire as she begins taking steps toward possibly having a baby. Meanwhile, she is cutting at the fabric of Gillian’s case against her. Claire makes very strong and calculated attacks at Gillian that demonstrates to the audience that she is just as formidable as her husband.

Elsewhere in the episode, Stamper works to relocate an increasingly erratic and shaken Rachel Posner, the former call girl who could be the smoking gun the journalists are looking for to unravel everything. It’s an interesting and integral subplot but in this episode it only showcases what we’ve already seen out of Michael Kelly’s character.

It’s a shame to admit that, of course, because Kelly is a very talented actor. However, I have high hopes for Stamper this season. I think the character took a slight backseat this episode due to the activities his boss got up to while waiting to be confirmed as Vice President.

SPOILERS WITHIN – Forgive me but here is where I’m going to spoil the bigger events of the episode. Read at your own risk but don’t be mad when you read the details of the episode.

So, in Chapter 14 of House of Cards we said goodbye to Zoe Barnes as her ethics and curiosity got her shoved in front of a train by the country’s next Vice President. It was a brutal event that was being built toward the entire episode. Frank denying his secret service detail until his confirmation and the way he looked as Freddy described the way his butcher slow-bled his pigs, it gave the impression that Frank was lusting for blood.

The actual act didn’t surprise me, so much as the brutality did. I admit, I unfortunately saw something online a day or two after the season premiered that led me to infer that Frank was going to murder Zoe. In a way, it made the episode that much more gripping for me. What I was expecting was something clean and easy to cover-up, like Peter Russo’s death in season one. What was delivered to me was a harsh and gruesome end to a reasonably ethical character.

This episode gave us a window into the soul (or lack thereof) of Francis Underwood. It also gave us something to ponder regarding Frank and Claire as a couple. I referred to them as a diabolical, power-hungry couple and they certainly are diabolical and power-hungry. What I found very interesting about this episode, however, was their “reaction scenes”, if you will. Let me clarify.

Toward the end of the episode, these characters each have a post-heinous act scene. For Frank, we see him speaking to his replacement as Whip. When she asks the rhetorical question “Have you ever killed anyone?” Frank’s expression doesn’t break in the slightest as he says “No.”

On the opposite end of the spectrum, we have Claire cancelling with her doctor and deciding not to try to have any children. This is after Claire’s told Gillian that she would gladly watch Gillian’s child “wither and die inside” her if it meant Claire got her way.

The way that Claire pauses briefly when she hears about Zoe’s death makes me wonder if she is growing a conscience. Considering what her husband does to people with consciences, I don’t know what that could mean for Mrs. Underwood. But it’s a thread that I hope will run throughout the season.

SPOILERS END HERE! – You may resume reading. You are out of spoiler territory.

Overall, this was a very strong premiere for a series that is helping Netflix change the landscape of television. I’m very excited to bring you reviews of every episode this season as I watch them.

What did you think of Chapter 14? Let me know in the comments and make sure you check out all my other House of Cards related posts. Also, follow me around the internet with the links below.