“Guys, where did all the (Bumble)bees go?”

What is there really to say about the new Transformers: Age of Extinction trailer?

First of all, I want to call it Trans4mers.

Volumes (I think) have been written about the much maligned sequels to the original, kinda pretty good, Michael Bay directed Transformers movie. They’re aimless, overly flashy, overlong, and stupid. This is public opinion. For each sequel, a trailer was released beforehand that instilled hope in fans. It’s easy to make a two-minute preview look super cool.

Nothing in the Trans4ers trailer makes me think it will be any different from its predecessors.

But a random sampling of the comment board on SciFied.com’s post of the new trailer tells a different story:

“That was awesome! But jeez, I knew Optimus and Grimlock had their differences but that was a little extreme. And Optimus has his orignial chasis[sic]. I am nerding out more than usual.” –KingKaijuGojira

“Looks really good.  Seems to have more depth to it than previous Transformer movies.  Plus, its great to see some Beast War action!” –Like a Bossk

“Yeah, I can’t believe I am saying this, but it does look good.” -Svanya

“This looks awesome. Cannot wait to see this.” –Gojira2K

I don’t know though; perhaps Like a Bossk has a point. The trailer brings Mark Wahlberg front and center as Shia Lebeouf’s replacement. I won’t call it a reboot, but Bay is certainly going for “refresh” in this new Transformers movie. The robots are the stars, but I like that Mark Wahlberg as a father brings a new dynamic to the movie. The human story is something the previous sequels lacked severely.

As for the “Beast War action,” Bossk seems to be a bit mistaken. What would a Transformers sequel be without the addition of a few new bots? This time around, fanboys are squealing at the sight of Grimlock and Swoop (or Strafe we can’t be sure yet.) These are actually Dinobots introduced in the original Transformers cartoon and not actually from the Beast Wars cartoon of the 90’s. Still though, pretty cool. 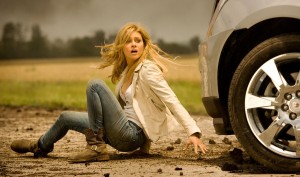