“Shake with your right hand, but hold a rock in your left.”

With Game of Thrones starting soon, I’m going to make a concentrated effort to watch House of Cards at a much quicker pace. So steel yourselves, a deluge of reviews will be coming your way over the next couple weeks, hopefully.

The first reaction this episode got out of me was a silent yearning to see a big budget, highly organized and meticulously researched Civil War reenactment. That is, despite the look of contempt and total lack of amusement by Frank in that opening scene. That look made me laugh, though. It was a nice image of Frank’s feelings toward the public relations aspect of the Vice Presidency.

But the Civil War reenactment plotline played out very well throughout the episode. Frank learned about his ancestor, albeit I thought it was kind of weird for a reenactor to be THAT committed to his character. Though, that’s why I need to go to one!

I’m not entirely sure what Frank putting his ring in the dirt signifies. The ring is a symbol of the power he wields. Maybe his respect for the country and for the people who have died in its name trumps his love of power? Or maybe it’s supposed to be a visual reminder that he has the power of the US Government behind him, as he told Feng earlier. I’m getting ahead of myself, though.

Episode 5 brought Frank’s covert war with Tusk front and center once again. Tension heated up as Frank worked with a Chinese billionaire to undermine Tusk’s influence with the President. It was a plan that ultimately landed Frank in hot water with the POTUS but also managed to inflict some damage on Tusk. I call it a shaky win for our Vice President.

In addition to Frank’s power struggles with Tusk, we were also treated to more scenes of the VP breaking the 4th wall and talking to the audience. I said this in my review of season one, but I absolutely love Spacey’s monologues. They round out the series with a certain Shakespearean quality that not many other dramas would be able to get pull off.

The subtle war for the President’s ear being played by Frank and Tusk is a delicate one and this episode really tested the boundaries of what has been established. I loved seeing the way Feng was the middleman, sending and receiving strikes from each side. It gave the story the perfect means of heightening the tension without it spilling over. Yet. 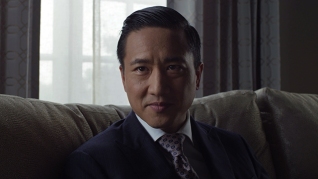 You would think two men using a third party to attack one another, in so many terms, would be dry but it really wasn’t. In fact, the scene between Stamper and Feng was one of the highlights of the episode for me.

We’re so accustomed to seeing Stamper wield the power in an exchange, often utilizing the threat of violence to gain it. But here, he couldn’t do that. And the fact that Feng used Stamper’s alcoholism as a means to gain the upper hand in the negotiations showed to me that Tusk is ready for the fight to get dirty.

Chapter 18 moved the silent war along well. Even though Frank’s actions caused Walker to push both he and Tusk away, it was still a victory for Frank. It makes me wonder what Frank’s endgame here is, exactly. Does he simply want a larger seat at the table, free of obstruction by Tusk? Or is Tusk merely one piece of a greater puzzle? We’ll see.

Aside from Frank’s journey through history, there was an interesting development with Clare’s new communications director, Connor. His job is about to be usurped by some guy named Seth Grayson. I don’t trust this Seth guy and I’ve come to like Connor. This plotline is a strange development. I’m curious to see where it leads. If it doesn’t tie together with the main plot in some way, it runs the risk of being superfluous and losing my interest.

Finally, we have Lucas Goodwin and the hacker Gavin. Wow. Regardless of Lucas’ arrest and the likely end of the plot line, I hope we see Jimmi Simpson on the show again soon. This episode was a great showcase for him as an actor. The scene where he tries to warn Lucas about what he’s doing and the scene with his handler later were two of the best scenes in the show this season.

The episode ended strong with Lucas getting arrested. It was really satisfying to see this trap unfold, seeing as it appeared to be kind of a back-burner plan by Frank’s people. The juxtaposition of the semi-cavalier way the VP and Doug handled updates about Lucas with the intense hacker scenes (not to mention the reality of the hell Lucas will face now that they’ve got him dead to rights) worked in perfect tandem.

I’m curious if the show will follow Lucas any further or abandon his storyline here. The show could go either way. As far as avenging Zoe, Janine is still in the wind. I suppose she could take a crack at Frank and try to exonerate Lucas.

I’m sure Lucas is done, though. They have him and there’s no way out of it.

And the butchery begins.

What did you think of Chapter 18? Let me know in the comments and make sure you check out all my other House of Cards related posts. Also, follow me around the internet with the links below.

check out my episode reviews of Bates Motel and Under the Dome.