“Any pugilist worth his salt knows when someone’s on the ropes, that’s when you throw a combination to the gut and a left hook to the jaw.” Read all of my House of Cards related posts here! Chapter 19 Things are heating up as I get closer to the halfway point of my unnervingly slow trek through a show that’s […] 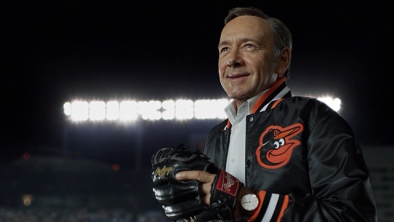 “Any pugilist worth his salt knows when someone’s on the ropes, that’s when you throw a combination to the gut and a left hook to the jaw.”

Things are heating up as I get closer to the halfway point of my unnervingly slow trek through a show that’s by all accounts designed to be binge viewed. But I’m committed to analyzing each episode I watch before moving on to the next stellar marriage of writing, acting and directing.

In Chapter 19, Tusk took desperate measures to beat out Frank to reclaim his spot in the President’s inner circle. Meanwhile, Claire took measures to create a wedge between the President and First Lady and a jailed Lucas reached out for help.

Early in the episode, Tusk attempted to extend an olive branch to Frank. I took this as a sign of defeat. But by episode’s end, Tusk proved he’s capable of at least one desperate power play. Obviously the war between Frank and Tusk is going to play out over the course of the season. So I’m curious to see what tactics Tusk uses in the coming episodes. Causing a blackout is a pretty big power play, though.

I’ll get back to Frank and Tusk later. For now, I want to focus on our “down on his luck” journalist. Lucas is incarcerated and was offered a plea deal that would see him serving about 7 years. The thread of deceit that ran through the Lucas storyline in this episode was intensely gripping. 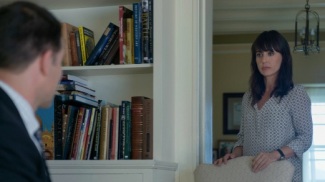 When the FBI agents visited Janine it sent a chill down my spine. The level of the government’s power that’s depicted in this show feels incredibly close to reality. The easy way the agents swept Lucas’ investigation and allegations under the rug made me uncomfortable as I considered if that type of behavior could (or does) happen in real life.

Lucas’ seemingly last hope is his former boss, Tom Hammerschmidt (Boris McGiver). Lucas asks Tom to look at everything and write about what Lucas found. Tom agrees but explains he has to do it objectively, as a journalist. Tom can’t guarantee how Lucas will look. Unfortunately for Lucas, it doesn’t turn out well.

After an intense face-to-face meeting with Frank in which Tom asks him point blank if he murdered Zoe, Tom writes the article. It paints Lucas in a bad light and Janine is strong-armed by the feds to swear an oath that Lucas lied. In the end, Lucas agrees to the plea. To add insult to injury, an inmate spits blood in Lucas’ face while he’s walked back to his cell.

I have a feeling Lucas is going to be murdered within the next two episodes. The guy is completely out of options. Unless Gavin comes around and looks into Frank, I don’t see this thread ending well. As unlikely as it seems, though, I would absolutely love to see Jimmi Simpson‘s role expanded. 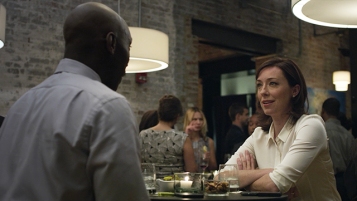 Jackie and Remy got closer. Hell, they slept together. I’m not really sure what to make of it. Jackie seems adamant about not letting it happen again, but she looked shaky. I have high hopes for her character. She seems to exist in a world she isn’t fully prepared to thrive in. She gives the illusion of being able to tangle in the political machine, but she has some growing to do before she can survive it.

Claire working to drive a wedge between the President and First Lady was great. A couple of episodes ago, I started to wonder about the end game of Frank’s plan. He’s been making a lot of references to having the power of the U.S. military behind him. He’s trying to get Tusk out of the picture because Frank wants to be in the President’s ear. Now that Claire is working the First Lady, I’m curious if Frank is looking toward stealing the Presidency.

Frank had some great scenes with Tusk in this episode. The scene in Frank’s townhouse was great. Tusk is smart enough to know that Frank still holds a grudge against from President for snubbing him for Secretary of State. It’s one of the reasons I loved their dynamic at the end of last season. Tusk is formidable, but Frank is powerful.

After Tusk blacked out Frank’s first pitch, the two met at Freddy’s. The scene is a reversal from last season finale’s meeting, in which Tusk asked to work together. Then, Tusk had power over Frank. Now, however, Frank is holding the cards and both know that the blackout was a bad and desperate move. 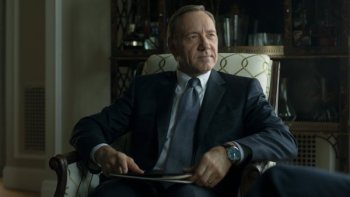 The last thing I want to bring up in this review is Doug and Rachel. We saw Rachel and her friend from the church getting interrupted by Doug. Stamper takes Rachel home and the two share an awkward moment as Rachel attempts to seduce him. Doug has been having a bad couple days. He feels bad about letting the Lucas situation spin out of control and land on the Vice President’s doorstep. Even still, he doesn’t have sex with Rachel.

Instead, Rachel makes dinner and shares an anecdote about her namesake from the Bible. She tells Doug that, in the Bible, Rachel had a son who became a king. The episode ends with Doug turning back with a look of surprise on his face.

I’m not sure what to take from this scene. Is Rachel pregnant? It kind of feels like Rachel might be knocked up. It was left pretty vague. I guess I’ll find out when I watch Chapter 20.

For now, though, thank you for reading my review. Check out the House of Cards page of the site for more reviews and posts about Netflix’s original series. Be sure to leave a comment and follow me around the Internet as well.

What did you think of Chapter 19? Let me know in the comments and make sure you check out all my other House of Cards related posts. Also, follow me around the internet with the links below. 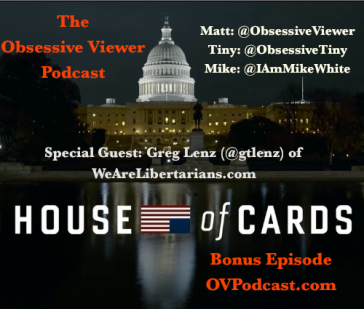