“Dogs are so predictable, aren’t they?” Read all of my House of Cards related posts here! Chapter 21 Chapter 21 proves that House of Cards knows how to handle a bridge episode. Despite nothing truly substantial happening in this installment, the show still managed to create an engaging episode that promises to yield dividends in the coming episodes.  Warning: Spoilers […]

“Dogs are so predictable, aren’t they?”

Chapter 21 proves that House of Cards knows how to handle a bridge episode. Despite nothing truly substantial happening in this installment, the show still managed to create an engaging episode that promises to yield dividends in the coming episodes.

Remy had a busy episode digging up dirt on the Underwoods. I guess my suspicion of Seth gaining Frank’s trust just to get access for Remy/Tusk was unfounded. Unfortunately, Remy could see right through Seth and now that bridge is gone. I imagine the Underwoods are rethinking pushing Connor out.

As far as Remy’s relationship with Jackie is concerned, I’m starting to lose interest in it as a storyline. For one, I feel like Jackie is a more interesting character than this plot line is giving her credit for. However, with Remy working with Tusk, I’m curious if the relationship is a tactic of some kind.

Elsewhere, Rachel has gotten much closer to Lisa while Doug has gone into some super creepy territory. I’m very curious how this will turn out. I wouldn’t be the least bit surprised if Doug ends up murdering both of them out of jealousy.

This episode also saw the return of Clare’s rape allegations against the General. This storyline isn’t going quite the direction I thought it would. However, it’s turned out to be a way for Claire to gain access to (and the trust of) the First Lady. I don’t mind that in the least bit.

Claire suggested that the First Lady and the President see a marriage counselor. By episode’s end, they do just that. I’m curious how this will shake out. I have a feeling the Underwoods are counting on the stress that counseling would put on an already strained President. Maybe it will cause President Walker to defer to Frank’s judgment more easily? Or maybe the Underwoods are playing a bigger game. 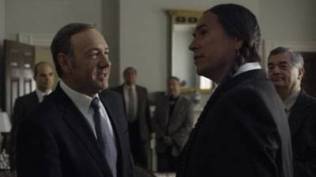 Frank had some mixed luck in this episode. As far as his war with Tusk, things aren’t going so smoothly. His scene with Tusk and Dan in Missouri was very well acted and well scripted; two things I’ve come to expect from the show. It makes me feel like Frank is losing control. It’s quite a different situation from what he went through last season.

Frank took the anger he gained from the meeting in Missouri and put it to good use in Washington, though. He flew off the handle with Linda in one of my favorite scenes Kevin Spacey has performed this season. Frank is manipulative and a very powerful person. I love seeing that power manifest itself in anger when Frank is put in a corner.

I loved the implication of the scene after that, as well. In it, Linda speaks to the President about him reconsidering Frank’s proposal about Feng’s bridge. Linda knows her seat at the table is slowly disappearing. The scene shows us that Frank has the President in his pocket. The Vice President is essentially the President’s sole counsel now.

I love the respect Frank has for Linda when she gives him the gift following her resignation. Both characters know they are playing a game and Linda knows she’s been bested. Of course, she doesn’t know Frank the way we, the audience, knows him.

The episode ends with Frank in a powerful position in the White House. However, Tusk has played his next hand with the help of Remy. The scandal about Clare’s affair with Adam last season (a plot line I wasn’t too crazy about) has broken. I wonder how Frank and Claire will respond. As Frank told Claire this episode, they can be dangerous too, when they need to be. And right now, I feel like they are going to need to be dangerous.

What did you think of Chapter 21? Let me know in the comments and make sure you check out all my other House of Cards related posts. Also, follow me around the internet with the links below.