So for each of these posts, I will write a present-day review and then copy/paste the original review after. Then I’ll compare the two and give a summary at the end. You can find all the reviews here, follow me on Twitter here and check out The Obsessive Viewer Podcast here. Now, lets talk about Thirteen.

Thirteen is the harrowing story of Tracy (Evan Rachel Wood), a young girl who becomes friends with troubled but popular classmate Evie (Nikki Reed). As Tracy spends more time with Evie, her relationship with her mother (Holly Hunter) begins to deteriorate, as does her innocence. The movie was directed by Catherine Hardwicke and co-written by Nikki Reed and largely based on her life.

This movie is really unsettling to me. The depiction of the girls’ descent into petty crime, drug use and sexuality feels like you’re watching a train wreck in slow motion. The way the narrative focuses on Tracy’s relationship with her mom from Tracy’s perspective gives the movie a skewed and bizarre feel that is tough to shake throughout the movie’s runtime.

Thirteen is relentless in its depiction of youth rebellion and bad influences but it’s the relationship between Tracy and her mother that gives gravity to the movie. This could have easily been a movie that shocked audiences solely for shock value but the dissolving mother/daughter relationship is the movie’s biggest strength. The slow progression of Tracy’s rebellion is paced well in contrast with her mother’s usurped control. 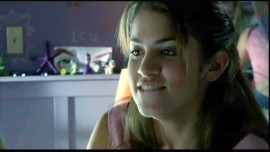 Hunter and Wood are really explosive in their roles. Wood tackles the difficult role of the destructive daughter with the chops of a seasoned actress. Hunter plays on her character’s slowly cracking patience and confusion that helps drive the tension of the movie right up to its climax. Nikki Reed handles the duality of her character (sweet toward Hunter, destructive toward Wood) really well. She’s a troubled character with her own complexities but she’s also pivotal to the relationship between Tracy and her mother.

The movie could have been a mess thematically but it reaches its necessary conclusion. It could have become a thriller or cautionary tale for parents but resigns itself to a think piece about damaged people and damaged children. In the end, its strong performances and terrific characterization will make you feel uneasy and contemplative.

This movie may not be worthy of your home collection, but it is worth the effort it takes to travel to your nearest Red Box kiosk.

Thirteen is the story of thirteen year old Tracey [sic] who makes friends with the “hottest girl in school,” Evie. What follows is an hour and a half of drinking, drugs, stealing and sex. The influence Evie has on Tracey alienates her from her mother, Melanie. This movie is not just about Tracey’s transformation from a nice innocent little girl to the emotional mess she eventually becomes. It is also about Melanie and how she has overcome problems of her own only to stand by and watch her daughter make the same mistakes. By the time Melanie realizes what is going on it is already too late for her to stop it. This makes for a very good finish to this tremendous film.

Melanie has a boyfriend in the film named Brady, played with intensity by Jeremy Sisto, who has also overcome problems with drugs himself and is a good part of Melanie’s life. What I found interested is that we see Brady through the eyes of Tracey. Through Tracey’s point of view we see him for what he used to be, a drug addict. Tracey hates him and hates that her mom is with him and, initially, the audience feels the same way. It wasn’t until later in the film that I realized that he was actually clean and a positive part of Melanie’s life.

Evan Rachel Wood portrays Tracey in a believable manner that makes you scared for the character’s future. As the film progresses we learn more about Evie and her homelife. We learn that her guardian does not care for her the way a parent figure should and we learn furthermore that she has never had a real parent in her life. This is what made her turn to such a troubled life. Nikki Reed, who wrote the script with the director, plays Evie with talent. The script is based on certain events that happened while she was thirteen years old and was written, with quality, in just six days. Catherine Hardwicke co-wrote the script and directed the film. As Tracey falls into this lifestyle the film gains a greenish tint. I see this as being in contrast to Tracey’s actions, the worse her actions get the darker the film gets up until the climax.

Thirteen was a unique experience and seeing as how I am not and have never been a thirteen year old girl I could not relate to many of the things that happened. Nonetheless this film should be seen by parents most of all. It addresses what I feel is a growing problem with youth today. The thought that some of this film was based on actual things is enough to scare any parent into taking a closer look at their child. I will give this film ***. It will be joining my dvd collection but I don’t think it is for everyone.

I’m actually pretty okay with my review from 2004, for the most part. I didn’t mention Jeremy Sisto‘s role in my 2014 review, that’s somewhat interesting. I noticed the perspective the movie took in telling its story, but a decade ago I attached that perspective to Sisto’s role. Now, I noticed the mother/daughter relationship more (and why shouldn’t I, it is the predominant relationship).

I don’t what else I have to say about it. Except that “this film should be seen by parents most of all” is a really pompous and douchebag thing for a 17 year old guy to say.