BEWARE: SPOILERS FOR THIS EPISODE AND PREVIOUS EPISODES ARE INCLUDED IN THIS REVIEW. You can find all of my Boardwalk Empire posts here. This week Boardwalk Empire aired its penultimate episode. “Friendless Child” was an intense and at times beautiful episode that showcased one of the writing staff’s better traits: their ability to infuse tension into scenes involving historical characters. […] 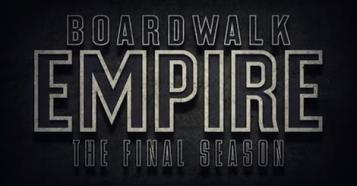 BEWARE: SPOILERS FOR THIS EPISODE AND PREVIOUS EPISODES ARE INCLUDED IN THIS REVIEW.

You can find all of my Boardwalk Empire posts here.

This week Boardwalk Empire aired its penultimate episode. “Friendless Child” was an intense and at times beautiful episode that showcased one of the writing staff’s better traits: their ability to infuse tension into scenes involving historical characters. The episode also set the stage for what we can only hope is a quality series finale next week. 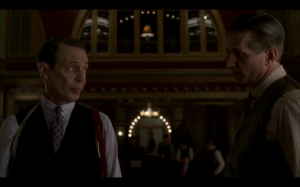 Although I have a lot of praise for this episode’s placement of characters and use of tension, I have to talk briefly about my disappointment in the way the writers seem to really be favoring foreshadowing. In the club, Nucky talks logistics with Mickey, then he laughs. Mickey asks what’s funny and Nucky simply says the two of them, together, in this situation is funny. It’s a nice moment that helps gives the episode a wistful tone.

However, it’s also an example of the show telegraphing a character death or action way too much. Later in the episode, Luciano kills Mickey during the hostage trade off while trying to make a deal to switch sides. Granted, the death is a proper send off for Mickey, a colorful character with mercurial allegiances played splendidly for 5 seasons by Paul Sparks. It’s just disconcerting that the writers would play fast and loose with the foreshadowing.

But that’s not the real issue I have with the show’s writing this week. I’m a little on edge, still, about Joe Harper, the new kid in Nucky’s organization that can really only either be teenage Tommy Darmody or a massive red herring. Early in the episode, Mickey hands Joe a gun. Nucky sees this and immediately takes it and gives it back to Mickey. I feel like the effort the show put into showing Joe having a gun is a (not so subtle) bit of foreshadowing that Joe will pop up in the finale to deliver some Darmody vengeance on Nucky.

Of course, that may not be the case at all. It’s possible that Joe isn’t Tommy and, instead, is working with Luciano and Lansky. Luciano referred to a “man inside” at the end of the episode. It would also account for how Joe perked up in his first scene when Mickey asked the vagrants if they’d liked to work for Nucky Thompson. For all I know, maybe he’s Meyer Lansky’s brother that Willie referred to in this episode.

There’s also the possibility that Joe is simply a character meant to remind us and Nucky of his past and how he’s trying to correct his behavior and prevent more people from being killed. But the amount of screen time Joe has been given this season really doesn’t mesh well with that theory. Not in my mind, anyway.

“Friendless Child” also featured the reunion of Eli and Will Thompson. Eli met with his assistant U.S. attorney son looking disheveled. Willie offers to take his dad in but Eli just wanted to see that his son was doing well for himself. It was a bittersweet moment as it signaled the likelihood that Eli was heading off toward a depressing death. That changed when the show employed another instance of convenient timing that they’ve been favoring this season as the scene ends with Will being abducted.

Luciano and Lansky grabbed Will so that Nucky would exchange Benny Siegel for him, who Nucky’s men nabbed earlier. I have to hand it to Michael Zegen and the writers, by the way. I love his performance as Siegel and I’m happy that the writers have given him so much more this season. As for the actual hostage exchange plot line, I wasn’t too excited about it but I really enjoyed the tension the writers brought to it.

The hostage exchange itself is a pretty common trope in TV and movies. Because of that, I was a little disappointed to see it employed in one of the most narratively important episodes of the series. The show handled the trope well, however, by filling the trade scene with so much tension that I forgot that a number of the characters involved, historically speaking, couldn’t die. I was nervous that the bullets would start flying. It was a little less dramatic than that, though. The deaths of Mickey and Archie were enough to release the vent on tension the show had built to that point. So it worked out very well.

The hostage-trading scene also gave us a broader look at where Nucky is right now, emotionally. In exchange for his nephew, he offered all of Atlantic City to Luciano and Lansky. It’s something that’s been building up inside Nucky throughout the season and maybe the series. He’s to a point where he’s lost a lot and doesn’t want the headache anymore. He’s willing to give Atlantic City over because he knows what the gangster lifestyle does and he knows he doesn’t really have anyone to carry on his legacy. 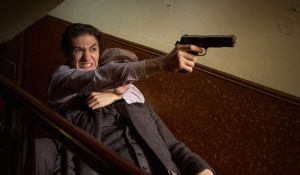 I think he’s also suffering from a guilty conscience. The flashbacks are building toward his original sin of giving Gillian over to the Commodore. He’s reached a point of self-reflection and he’s realizing that his empire has come at a high cost. His jealousy toward Kennedy and his trouble with setting up a legitimate liquor business shows that Nucky is a gangster who doesn’t really fit into (or care about) the gangster lifestyle anymore. Of course, as I said in my season 4 review, it could also simply be a case of the writers not having a fully realized plan for the character from the show’s inception.

Nonetheless, Nucky offering his empire to the young gangsters in exchange for Willie was a strong moment. Meyer’s request that Nucky get on his knees was a nice callback to last season when Nucky had Lansky on his knees in front of an open grave after finding out he and Luciano were piggybacking off Nucky’s shipments from Tampa with their heroin trade.

Nucky gets Willie back by offering to take care of Maranzano for Luciano and Lansky. Eli and a team of Nucky’s men go into Maranzano’s office and stab him repeatedly before Eli puts a bullet in his head. They then exit the office, leaving a hysterical woman staring at the carnage.

Maranzano’s death scene is intercut with scenes showing Mike D’Angelo and another Treasury agent seeking a warrant for Capone. It’s a good misdirect that makes the violence in Maranzano’s office more gruesome. D’Angelo getting the warrant (plus the absence of Chicago this week) makes me kind of disappointed with the absence of Eliot Ness in this final run of episodes.

I’m shamed to admit that I genuinely had no idea how little Ness had to do with Capone’s actual downfall. Add to that the fact that fairly notable HBO alum Jim True-Frost appeared as Ness in the second episode and you’ll understand why I’m surprised. Even with my misunderstanding, I wish the more true side of Ness’ story had been depicted more in the show. I imagine if the final season had more time, the writers would give more time to Ness and the public face (from my understanding) he gave to the Capone investigation.

The episode also featured a short scene with Margaret calling Nucky to give him an update on Mayflower Grain Corporation’s shortening stock. Nucky tells her to shorten it more. When she says the market will notice, he tells her that’s the point and then he hangs up on her. I wonder if Margaret’s going to get arrested for what she’s doing on Nucky’s behalf.

Late in the episode, Torrio sits with Lansky and Luciano. He starts talking about their strategy for getting everyone together for the conference but Luciano all but writes him off. Siegel walks in with women and booze and the young gangsters head off to celebrate, leaving Torrio, aging gangster that he is, off by himself. It further hammers down the “out with the old, in with the new” sentiment that the show has been giving us this season.

The flashbacks in this episode featured Deputy Nucky and Mable trying to figure out what to do about Gillian. Mable wants to help her but Nucky feels as though his hands are tied by the law and the thought of having to provide shelter and food for someone he sees as a thief. The couple argues over it until Sheriff Lindsay arrives with a late night task.

Lindsay hands his badge to Nucky and vaguely talks about the Commodore’s reign with contempt. He heads off and leaves the more clandestine and intimate jobs of Sheriff to Nucky. The Commodore comes out of his room with his clothes looking disheveled. Nucky’s first job is to transport a young, distraught looking girl home.

When he returns home, Mable tells him that Gillian ran off.

The episode ends with a truly beautiful sequence. 1931 Nucky picks up a letter and reads it. It’s from Gillian in the sanitarium. He reads as she tells him that he’s the only one left who knows her. She’s desperate and needs his help to get her out of the sanitarium. The voice over is accompanied by haunting shots of Gillian in the sanitarium, reminding us of the Hell she’s living in. The sequence really punctuates how tragic her arc truly is in this series.

The episode ends and we’re left waiting until next week’s finale to see what Nucky does.

My final prediction for the series is that Nucky will decide to save Gillian as a way to ease his conscience of the things he’s done and the deaths for which he’s responsible. But I think Joe will reveal himself as Tommy Darmody. Joe will kill Nucky before he can save Gillian and I have a feeling one of the last shots of the series will be Young Nucky handing Gillian over to the Commodore. This sequence will be intercut with 1931 Gillian either being operated on or post-operation. I wouldn’t be surprised if the operation is a lobotomy, to really pin down the tragedy.

My final thought for this review: I wonder if Nucky still has the life insurance policy Rothstein took out on Mickey in season 1 and then sold to Nucky last season.