A decade ago, I was a teenager in high school. I had my first job at my local movie theater and used my newfound disposable income to get a Netflix […]

So for each of these posts, I will write a present-day review and then copy/paste the original review after. Then I’ll compare the two and give a summary at the end. You can find all the reviews here, follow me on Twitter here and check out The Obsessive Viewer Podcast here. Now, lets talk about The Day After Tomorrow.

Roland Emmerich is no stranger to destroying the word. He attempted to wipe out humanity with aliens in Independence Day (1996) and with prophetic natural disasters in 2012 (2009). In 2004, he used climate change as his vehicle of destruction in The Day After Tomorrow. Dennis Quaid is paleoclimatologist Jack Hall, a family man who discovers that the Earth is on the brink of its next Ice Age. Jake Gyllenhaal plays his son Sam, who’s stuck in New York City when a massive international storm hits. 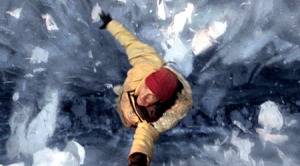 The Day After Tomorrow uses global warming and climate change as its catalyst for the destruction of the northern hemisphere and the script really beats you over the head with it. There’s a scene early in the movie where Jack is at a conference speaking to the Vice President (Kenneth Welsh), who quickly and arrogantly dismisses the scientist’s claims. It happens throughout the first act of the movie, as if Emmerich is making a profound statement on humanity’s ignorance of global warming. But it’s used strictly for the plot of the movie, dumbing down the information so John Q. Summer-Moviegoer can follow it.

This movie wasn’t made to make you think about humanity’s dependence on fossil fuels, though. The Day After Tomorrow is a popcorn movie, plain and simple. Unfortunately, Emmerich fails pretty hard in that regard. The special effects are laughably bad, for the most part. There are CGI wolves that look more like test footage and not formidable in the least. The movie opens with a hysterical green screen sequence featuring Dennis Quaid in Antarctica.

The shoddy effects are enough to make you want to turn off the movie. As if to seal the movie’s lackluster fate, however, is the disjointed subplots riddled with unlikable characters and uninspired storytelling. The acting chops of Ian Holm go to waste as he plays a scientist who helps alert Quaid of the impending catastrophes. The subplot plays up the relationship of Holm and his colleagues while stating their fates as plainly as possible with weak exposition and awkward references to their family lives.

The bulk of the movie is devoted to Dennis Quaid and Jake Gyllenhaal’s father/son relationship. This leaves a dangling subplot involving Quaid’s wife/Gyllenhaal’s mother played to the melodramatic max by Sela Ward. It’s established that she’s a doctor and the movie forces a story involving her decision about what to do with a young cancer patient when it comes time to evacuate. Her entire character could have been lifted out of the movie and I would have given it half a rating higher of a score because it would have wasted a little less of my time.

There’s some decent comic relief in Gyllenhaal’s awkward teen encounters with Emmy Rossum‘s character. Quaid’s character’s research assistant (Dash Mihok) is good for a laugh or two, but comic relief in this kind of movie is a release valve for tension. Even if it’s fun, popcorn tension, that’s where bits of humor in this genre excel. The Day After Tomorrow is so lacking in the tension and visual effects department however, that any humor comes across as flat.

The Day After Tomorrow uses global warming as a device for ridiculously fast-paced cataclysmic natural events that gives director Roland Emmerich an excuse to showcase his profound lack of skill as a director using visual effects. Disaster movies come and go and this entry in the genre is one that you’d be better off missing.

Catch it on TV – You might get a modicum of entertainment out of this if the network it’s on plays decent commercials with it.

Seeing “The Day After Tomorrow” got me thinking about how important it is to keep our environment clean and to be cautious about the affects [sic] of global warming. To be completely honest with you, global warming was the last thing on my mind while watching the latest big budget disaster flick from Roland Emmerich. I was more focused on trying to figure out why so many heroes in movies are named Jack. I was a little too busy suspending my disbelief and trying to ignore cliché after cliché. Once I successfully ignored the terrible script and horrid predictability of the movie I found myself enjoying the eye candy.

The movie’s plot is pretty straight forward. Mother nature is p***ed at us, I guess for that hole in the ozone layer and decides to unleash all hell and start the next ice age. There are major weather disasters all over the world spanning from tornados to hail, tidal waves and freezing hurricanes. In the midst of all this disaster, a family is torn apart. The main story focuses on the relationship, or lack thereof, between paleoclimatologist Jack Hall (Dennis Quaid) and his son Sam (Jake Gyllenhaal). Sam is a genius who is on some academic team, which he joined because he is in love with a girl who takes the team seriously. The team is in New York City for a competition and you can pretty much guess what happens after that.

The acting was better than I expected. Granted, I wasn’t expecting much. There are a few light hearted jokes planted here and there throughout the movie for comic relief. It works. I admit I was laughing whenever Jason, the young scientist protege of Jack, was hitting on Tamlyn Tomita’s character. Jack’s wife’s storyline is insignificant and hard to care about. Lucy Hall was overall a pointless character and had no real purpose. However, if the plot line involving her had been dropped it would not have improved the story at all. The special effects are breathtaking, as expected. There are a few instances where they are a little much but they were few and far between.

Overall the only reason to see “The Day After Tomorrow” is the special effects. Even though a few sequences are clearly CGI, they are still good enough to merit this movie ***. It will go down as a guilty pleasure of mine and I will more than likely add it to my DVD collection. But I won’t be in a hurry to buy it and I will only watch it when I am bored and don’t feel like thinking.

Oh look at 18 year old Matt with the misdirect right in the first sentence. What a joker.

I remembered nothing at all from this review until I just now read it. The Day After Tomorrow isn’t a deep movie at all so there isn’t much analysis between the two reviews. I heralded the special effects in 2004 and laugh at them a decade later. I wonder if I’m less impressionable now or if visual effects have just improved so much in the intervening years.

I came to the same conclusion about Sela Ward’s character. I also liked the comic relief in 2004. It’s worth mentioning that my 2004 review kind of spotlights why I don’t work well with 5-star rating scales. 3 stars is the equivalent of 6 out of 10 and I end the review with: “I will only watch it when I am bored and don’t feel like thinking.”

I did end up buying, by the way. And, yes, I do really regret it.