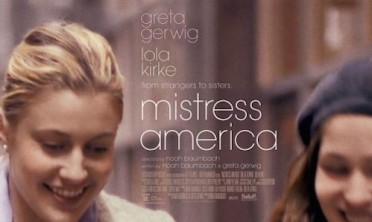 I watched Mistress America as part of 2015’s Indy Film Fest at The Toby in the Indianapolis Museum of Art. You can find more of ObsessiveViewer.com’s coverage of the festival here.

Mistress America is the latest comedy from Noah Baumbach (Greenberg, While We’re Young, Frances Ha) and stars Greta Gerwig, who also co-wrote the script. The movie is about Tracy (Lola Kirke) a college freshman that forms a bond with her older, adventurous soon-to-be stepsister Brooke (Greta Gerwig) after being rejected from her school’s literary society.

The movie is unique in that the beginning and end play out like a traditional movie, but sandwiched between those acts is a middle section that feels more like a stage production than anything else. In this act, a group of characters travels to Connecticut. Once they reach their destination, Baumbach takes his characters and unleashes a rapid-fire succession of hilarious dialogue, situational humor, and increasingly awkward social situations.

In the most impressively shot scene in the movie, the camera remains still as half a dozen characters argue their way through multiple story arcs happening concurrently on-screen. The rapid-fire dialogue coupled with pitch perfect delivery and impeccable timing made this scene the crown jewel of an already stellar production.

Mistress America follows Brooke’s eccentricity and self-doubt through the eyes of Tracy, whose naiveté leads to hero-worshipping. The two leads have strong chemistry. Brooke’s self-centered, energetic persona plays well off of Tracy’s introverted lack of confidence or understanding of the world. Gerwig and Kirke compliment each other well.

Although the middle section of the movie is by far the most enjoyable portion of Mistress America, the first and last acts of the movie are respectable in their own right. I was less interested in the setup in the movie’s opening half hour, but was far more invested in the drama of the third act.

Regardless, the performances and quick fire dialogue make Mistress America well worth seeing and a very fine comedy. Noah Baumbach’s story of free-spirited ambition and youthful hero worship is entertaining and jumps into high gear in a phenomenal and impressive second act.