In Denis Villeneuve‘s latest movie Sicario, Emily Blunt plays Kate, an idealistic FBI agent recruited to an interagency task force working to take down a drug cartel on the US/Mexico border. As the task force moves closer to the objective, Kate begins to question the tactics they use and her purpose within the unit. Sicario is a beautifully made film. […] 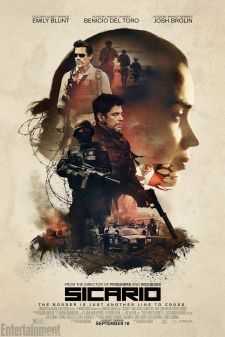 In Denis Villeneuve‘s latest movie Sicario, Emily Blunt plays Kate, an idealistic FBI agent recruited to an interagency task force working to take down a drug cartel on the US/Mexico border. As the task force moves closer to the objective, Kate begins to question the tactics they use and her purpose within the unit.

Sicario is a beautifully made film. The action sequences tell incredibly tense stories as Villeneuve maneuvers his characters through both open environments and confined areas, building tension equally well in every locale. Roger Deakins photographed the movie and composes some of the most jaw-droppingly beautiful shots I’ve seen in recent memory. There’s a sequence late in the movie where the scene alternates between night vision and thermal imaging that’s nothing short of spectacular.

Despite such brilliance behind the camera however, I had a difficult time getting into Sicario. Blunt’s character is a “fish out of water” as she’s plucked from her position in Arizona for the task force led by Josh Brolin‘s delightfully quirky character. She acts as the audience surrogate to the plot, so her lack of information reflects our own lack of information.

It’s an effective storytelling technique as we see how ruthlessly the team operates and react just as Blunt’s character does. However, that doesn’t mean the plot is engaging. We’re as confused as Blunt’s character but we’re not trapped in the situation as she is. This had an adverse effect on my viewing experience because I wasn’t trying to figure out the methodology and climate of the war on drugs south of the border. I was trying to find something to latch onto from a narrative perspective.

Even though Blunt’s character is the audience surrogate of Sicario, she’s not the focal character. The movie belongs to Benicio Del Toro‘s mysterious Alejandro character, about whom Kate (and thus the audience) knows next to nothing. The mystique of Alejandro is played up throughout the first two thirds of the movie before we’re given insight into what drives him. He’s an interesting character and he has the best narrative arc of anyone else in the movie. I just wish we were being told his story from the beginning instead of affixing our attachment to Blunt’s ultimately superfluous character.

Throughout the movie we’re shown glimpses into the home life of a police officer in Mexico played by Maximiliano Hernández. While this character does follow a trajectory throughout the movie and have a purpose within the overall narrative, these small glimpses into his home life did nothing for me. Similar to the main task force plot and Alejandro’s arc in the first half of the movie, I didn’t have enough information about Hernandez’s character to invest me in the storyline.

There were also certain leaps in the story that didn’t make much sense. Blunt’s character has a dangerous encounter with someone, but the setup that leads to this circumstance seems a little far fetched. Later, Blunt refers to the person in a way that just wasn’t communicated in the scene. The situation plays out as happenstance but later she refers to herself as a target. It was confusing and took me out of the movie. Likewise, Brolin’s character goes to lengths not to have Kate’s partner (Daniel Kaluuya) included in the task force. After Kate’s baptism by fire, the partner becomes a part of the task force without much mention. It feels like there was a missing scene or line of dialogue somewhere in the first act.

My reaction to the narrative structure of the movie is really a shame. In the end, the story being told in Sicario is interesting and could have been engaging. Unfortunately, my interest was only piqued in intervals. There’s a narrative through line that I can get behind but the overall delivery method failed to engage me through the majority of the movie. The visual approach Villeneuve and Deakins used to unravel the plot is the standout of the movie and may convince me to see it again at some point. But the story and narrative left me wanting. 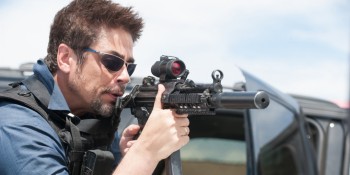