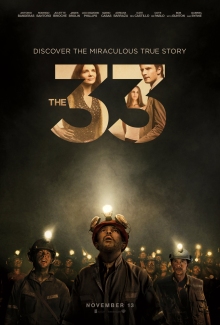 Patricia Riggen‘s The 33 recounts the harrowing 2010 story of the 33 Chilean miners who were trapped for 69 days in the San José Mine in the Atacama Desert near Copiapó, Chile. The film spends equal time between the turmoil within the mine and the efforts above ground to rescue the miners.

Riggen opens the movie with a look at the lives and loves of the miners before the collapse. This slice of Chilean life was effective at setting up our central protagonists above and below ground while also serving as a pleasant view of the culture in which they live. It framed the ensuing drama in a context that put a spotlight on those involved. This was much more effective than a highlight of media coverage would have been. Real news footage is included in The 33, however, it isn’t until the third act and it’s used sparingly.

The heart of the film lies in the story being told. The men in the mine form a bond during their entrapment. While the movie does touch on some of the egos and disagreements in how their crisis should be handled, the group falls in line with each other fairly early. There’s drama involving rationing of the small amount of food they have and there’s some prejudice leveled against the Bolivian miner, but interpersonal drama within the mine isn’t as central as one might think.

The de facto leader of the miners is Antonio Banderas’ Mario Sepulveda, whose take charge approach causes him to butt heads with Lou Diamond Phillips’ Luis, the mining engineer whose warnings about the mine’s structural integrity went unheeded. I wish there was more conflict between these two characters but between the threat of miner’s lung disease, impending death, the rationing of food, and all the bureaucracy and family drama above ground, The 33 is dense enough with tension as it is.

Rodrigo Santoro place Chile’s Minister of Mining Laurence Golborne. He’s a compassionate member of the Chilean government who spearheads the rescue mission despite having no background or training in mining. Santoro is engaging and gives the audience a character to root themselves in.

The other characters and situations in the storyline on the surface are a little hit or miss. Bob Gunton gives a slightly distracting performance as Chilean President Sebastián Piñera. He isn’t that prominent in the movie, but the accent he uses for the role isn’t quite up to snuff and took me out of the film slightly.

As the miners settle into their entrapment, a routine develops. We have glimpses of how they ration food and water and how they filter their water. With so much story and characters to juggle, the fragile ecosystem they find themselves isn’t explored as fully as I would have liked to see. However, there’s a particularly poignant sequence involving the men eating the last of the food that is not only moving, but helps solidify the bond the 33 men share.

In 2010, the story of the Chilean miners’ entrapment captivated the world. In The 33, Patricia Riggen successful tells audience’s the story behind what happened and the brotherhood that formed so far below. The 33 is an uplifting story about survival and the toll that such a traumatic event took on so many people.