Until early last year, I had never seen an Alien movie. Disgraceful, I know. In preparation for the release of Prometheus and Ridley Scott‘s return to sci-fi and the world that terrorized the genre, I watched Alien and Aliens for the first time. Eventually, when the New Year arrived, I bought the Alien Anthology Blu-Ray Collection.

Now that I’ve finally cracked open the 6-disc set, I can say with absolute confidence that this is the finest blu-ray set I’ve ever seen. The movies look and sound incredible and the amount of supplemental material is so staggering it’s to the point of being overwhelming.

So enjoy my review. A set this magnificent definitely deserves a thorough review. 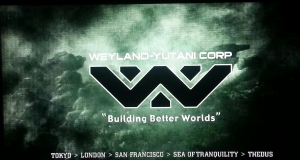 MU-TH-UR MODE is the crown jewel of the Alien Anthology set. It’s a very convenient setting used throughout the entire set to organize the massive amount of special features.

If you enable MU-TH-UR MODE during any of the movies, a heads-up display will be on-screen during the movie. The HUD gives you a variety of options while the movie plays. You can easily switch between commentary tracks and isolated scores with MU-TH-UR MODE. There’s also a Data Stream setting you can enable that will provide a pop-up trivia track that runs through all 8 versions of the movies.

A great feature of MU-TH-UR MODE is the use of Data Tags. You can click the Visual tab of the HUD while the movie plays. Periodically a notification will appear showing you there is a video file relevant to the scene your watching. If the video’s description interests you, you can save it as a Data Tag. After the movie, you can switch to the bonus discs and have all your Data Tags waiting for you (in order) in the Data Tag section. This is an excellent feature to have if you feel overwhelmed by the amount of content in the set.

If you don’t like the HUD, all of the videos can be found conveniently organized on disc 5.

If you just want to search for a specific topic in the special features, then DataSearch is for you. With DataSearch you can comb all the special features for content about specific topics. If you want to see what the filmmakers have to say about the Space Jockey, simply scroll through the alphabetized keyword list and click Space Jockey and it’s all there. Even better, the results are separated by movie so you know exactly where the clip is coming from. It’s details like this that make this set truly remarkable.

Disc One: Alien – (buy the individual blu-ray on Amazon)

The movie itself is phenomenal, of course. The sci-fi/horror classic follows a crew of 7 on a towing vessel as they follow a distress signal to a derelict ship and soon fall prey to a malevolent creature aboard their ship. The movie is genuinely frightening as it plays up a highly claustrophobic environment. Alien is also a study in perfect pacing. No shot is wasted. It’s a film that’s still influencing movies made today.

The original and best of the franchise looks stunning on blu-ray. Granted, I don’t have a frame of reference, but the picture looks perfect throughout and the sound is terrific. The only blemish occurs in a scene early in the film when Ripley is talking to the mechanics on the ship. The sound is noticeably not up to par for a line or two. It’s a forgivable, but noticeable, flaw in an otherwise flawless transfer.

Audio Commentary (for Theatrical Cut only) by Ridley Scott

I’m not a big James Cameron fan. Next week I’m actually posting a 2-part entry re-examining the work of, who I believe is, the most overrated director in Hollywood. Despite that, I really like Aliens.

Aliens defies the stereotype that a sequel should be more of the same. It’s a combat film that escalates the scope and scale of the first one without sacrificing too much of the fright. Though it has some problems with pacing, it’s still a great sequel and one of James Cameron’s better movies.

My only real issue is pacing. I don’t have a problem with slow pacing in general at all. In fact, I love it as long as it’s used for character development. Aliens, however, takes an hour in the theatrical cut for the first alien to pop up. In that hour we learn Ripley has PTSD, there’s an android on the mission and Marines are macho. In other words, Cameron spends an hour on what could be summed up in a scene’s worth of dialogue. 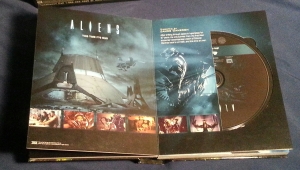 Alien 3 is a mess of a movie. It was David Fincher‘s first feature film and the production was such a nightmare that he has completely disowned the finished product. As one of the producers in the “Wreckage and Rage” documentary on disc 5 puts it, “We set out to make a release date; not a movie.”

The movie isn’t totally unwatchable, however. There’s an orange and gold hue throughout that sets a good atmosphere for the movie’s prison planet setting. Alien 3 begins strongly enough with a surprisingly tragic opening and the ending isn’t too bad. It’s the middle section where the movie gets messy and has its problems.

Speaking as someone who hasn’t seen the Alien vs. Predator movies, Alien 3 is the weak link of the franchise. It gets pretty bad but not terrible. 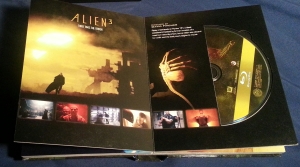 I liked Alien: Resurrection. I know I’m in the minority here and I will be the first to admit they completely ruined the Ripley character by creating this alien/human hybrid clone super soldier. But there is something kind of satisfying about the movie. It might be due to Alien 3 being so awful, or it might be the involvement of Joss Whedon as screenwriter. Either way, it’s a watchable and, dare I say, entertaining entry in the Alien saga.

What I liked most about Alien: Resurrection was how much of a Firefly feel it had. The space pirates at the center of the plot are clearly Whedon’s precursor to the Serenity crew of Firefly. Ron Perlman (who is great in the movie) plays essentially the character that Adam Baldwin would portray in Firefly.

If you take away the “early-Whedon” charm, however, the movie is just okay. The xenomorphs swim and it teeters back and forth between absurd and suspenseful. I wouldn’t mind watching it again, though, and I am glad it’s part of the collection. 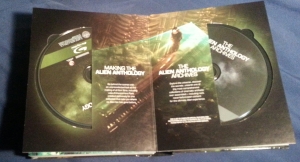 Disc 5 is the mother lode (or “MU-TH-UR” lode, I should say) of the Alien Anthology Set, when it comes to bonus material. It’s packed with over 12 hours of documentaries and an additional 5 hours of supplemental videos referred to as “Enhancement Pods.”

Each movie gets its own 2-3+ hour documentary that guides the viewer behind the scenes through every step of the filmmaking process. The documentaries here are divided by movie and then broken apart into small digestible chunks. It’s reminiscent of the way the documentaries are set up in the Lord of the Rings extended edition box set. 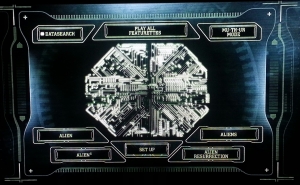 The Beast Within: Making Alien

This documentary provides great insight into how the filmmakers worked to avoid making a B-Movie. There’s also great interviews and footage about iconic scenes from the movie and interesting looks at H.R. Giger’s designs.

The filmmakers and producers speak about how they set out to make a different kind of movie. Of course, there’s a special, thorough, emphasis on the visual effects used in the movie.

For me this is the standout documentary on the disc. The doc is easily 10x better than the actual movie. The people involved with the movie speak very candidly about the troubled production and it’s very fascinating. Not surprising, David Fincher is nowhere to be found. But enough is said about his work on the movie that there doesn’t seem to be any missing information.

There’s a great segment about story editor Vincent Ward’s original vision for the film that involved a wooden planet of monks who view the alien as the Devil and Ripley as the harbinger of their doom. Watching it is heartbreaking because it would have made for a vastly better movie.

One Step Beyond: Making Alien Resurrection

This is the shortest of the documentaries. It includes really interesting looks into the filming of the underwater sequences, anecdotes about the basketball scene and thoughts on where the people involved would take the franchise in future movies.

Disc six of the set is an archive of essentially every other supplemental feature that could be found. It’s packed with an amazing amount of content. Like disc five before it, all the content is organized by movie. It also includes an Anthology section that includes some miscellaneous documentaries and images from the franchise. Below is a breakdown of what all is on the disc.

Laserdisc Archives (all special features in the laserdisc special edition)

Laserdisc Archives (all special features in the laserdisc special edition)

Aliens: Ride at the Speed of Fright – Introduction video to (and simulation of) the Aliens ride from Fisherman’s Warf in San Francisco

Aliens 3D – Conceptual drawings, storyboards and the unused screenplay for a theme park attraction in Korea.

Aliens in the Basement: The Bob Burns Collection [16mins 54secs] – Featurette about a man who has a collection of props and memorabilia from the Alien franchise.

Parodies [2min 19secs] – A pair of clips from Family Guy and Spaceballs spoofing the Alien movies.

Dark Horse Still Gallery – Gallery of images and information on the Dark Horse Comics Alien series that began in 1988.

Patches and Logos Gallery – Images of patches and logos from the Alien universe.

If you didn’t stop reading this halfway through and immediately go to Amazon to buy it, you either already own it or you hate your blu-ray player. I spent a couple of weeks going through the set and writing this review. Today, as I was getting the pictures ready for this post, I realized I was ready to go through the set again.

The Alien Anthology Blu-Ray set will be the measuring stick with which I judge every new blu-ray collection I purchase. It’s simply awe-inspiring. The fact that this set doesn’t cost upwards of $100 makes it an absolute steal. At the time of this writing, you can own the complete set for $32.39 on Amazon. I can honestly say that I would pay that for just the first two discs alone and I would still feel like it was a great deal.

Don’t forget to follow me on Twitter: @ObsessiveViewer for live-tweets about movies and shows I’m watching and keep up with the blog on Facebook for all the latest posts and blog news.