“I think I’ve proven I’m not your typical Vice President.”

Well, here we are. We’ve reached the end of season 2 of House of Cards and the end of my episode-by-episode reviews. I hope you enjoyed going through this season of the show with me. It’s been fun (and a bit tedious at times, to be honest) to bring you reviews of every episode. But I did it for you and for the sake of the “country” of Netflix users. One nation, Underwood.

I wasn’t sure what I was expecting going into this final hour of season 2. I knew on a basic level that Frank would usurp the Presidency from Walker and I had my suspicions that Doug would relapse and murder Rachel. As it turns out, I was only partly right on those fronts.

Throughout the first half of the episode, I was floored at the sight of Vasquez teaming with Walker to leak information on Frank. In all honesty, it made me realize how much I wanted more internal scheming against Frank in the show’s two season. Even still, I enjoyed the dynamic shift in this finale and I’m hopeful this will continue into season 3.

I’ll get back to Frank later in this review. For now, I need to talk bout Megan. I was not expecting her to try to commit suicide. In hindsight I’m pretty stupid to have overlooked that situation. It wasn’t the attempt that surprised me, though. Claire’s scene with Megan in this episode was incredibly valuable to the narrative unfolding.

In the scene, Megan seemed very haunted. She was troubled before Claire’s interview, but it’s evident that the way Claire used her took a heavy toll. A recurring theme of this season was that so many people are becoming aware of what the Underwoods are doing to them. Not only that, but the pawns in their games are actively calling the Underwoods out on their behavior.

It’s in these types of scenes that the writers hold a mirror to Frank and Claire. More is said about the characters by their reaction (or non-reaction) to that mirror than by the characters holding the mirror. From the heavy look Claire gave the television in reaction to Zoe’s death early this season, to the tearful breakdown on the stairs after talking to the first lady, it’s pretty clear that Claire isn’t as strong as Frank. It makes me wonder how much trouble she might inadvertently (or purposefully) cause down the road.

The way Jackie and Blythe about the impeachment proceedings gave us a more gross view of politics than, I think, this show as a whole has really ever given us before. If not, then it at least felt strange to see the glee they felt toward such a historically messed up situation. In my notes for the episode I wrote: “I need to watch The West Wing after this.”

Elsewhere in the finale, Gavin’s meeting with Doug had me on edge. Gavin strikes me as a loose cannon with nothing to lose while all season Doug has been an emotionally unstable character, ready to crack. Their meeting went well under the circumstances, though and Gavin came out of it looking like a big threat to Underwood.

That threat will likely play out unimpeded next season considering the condition the show left Doug in at the end of this episode! For the record, I think it’s safe to say that Doug Stamper is dead, as much as that sucks to write. His arc this season was great and I really do admire the show for surprising me in such a way. 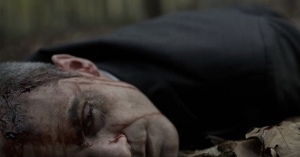 It was a dangerous game for the show to play, having calling Doug’s alcoholism into attention so often throughout the season only to have Rachel be his undoing sans relapse. It is fitting, though, considering the relationship between Doug and Rachel is so intertwined with his alcoholism. Rachel represents the bottle. Instead of relapsing, Doug re-appropriated his addiction onto a different source and that became his downfall.

I’ll miss Michael Kelly on the show. He was fantastic.

As far as Frank is concerned, things went well for him in this finale. I’m talking, of course, about the very nice present Claire gave him. Oh yeah, and the fact that he ascended to the job of Leader of the Free World! I know I expected it. I know the series has been building toward it. I just didn’t expect how I would feel about it and I didn’t contemplate the far-reaching implications for the series as a whole with Frank in the Oval Office.

But first, let me hit on a few points about the last few stops on Frank’s road to the Presidency.

Frank and Tusk’s meeting outside of the Opera was incredibly well done. Part of what made that scene work so well for me was the use of the Opera music. It set a great stage for a very strong meeting between the two characters. The dialogue and superb acting by both Spacey and McRaney really elevated the scene to a highlight of the season for me.

Another highlight of the season (and series as a whole) was Frank’s letter to the President. The way the scene was constructed was a thing of absolute beauty. Seeing Frank type it while cutting to Walker reading it all while Frank switches between narrating it and speaking it directly to the audience was magnificent. It also makes me wonder if he was being honest with Walker, at least regarding the story with his father. I’m curious if that is why he addressed the audience directly. It may be an indicator that he was actually being honest with the President, for a change.

Whether or not he was lying is irrelevant for now since his ultimate plan that he set in motion 25 chapters ago came to fruition. President Walker resigned and Francis Underwood took the oath of office. The haunting music that I loved so much a few episodes ago returned when Seth announced “President and Mrs. Underwood” as the pair walked toward the Oval Office. I obviously felt an intense foreboding in that scene.

I wondered how the season would end. I was expecting and hoping for an epic Frank monologue to the camera about wielding power and vanquishing his enemies or something. But once I saw Claire give him the new ring, I knew exactly what the last shot of season 2 would be. Seeing Frank knock twice on the desk was a perfect last scene and it makes me very eager for season 3. 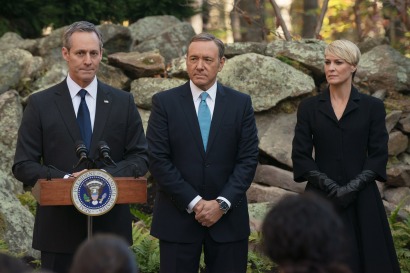 My thoughts on the future.

Now that I’ve had some time to take in season 2 finale of the show I’ve been able to contemplate one thought that has been on my mind. I can’t help but be curious where the series is headed going into season 3. Moreover, Chapter 26 left me wondering just how much creative juice is left in the show.

We’ve watched Frank manipulate and scheme his way to become the most powerful man in the world. Two full seasons have been devoted to Frank climbing into the Presidency. I’m really eager and curious to see what season 3 will be like. Since Frank doesn’t have anywhere else to “climb”, how will he handle being President? Will the show change in tone or, dare I say, suffer in any way?

I don’t think so. For one thing, Gavin and Rachel are in the wind. It remains to be seen whether Gavin is formidable enough to take down the President, but it should make for great television.

My hope for season 3 is that it does one (or both) of two things. Either we’ve spent two seasons seeing Frank’s rise to power and Season 3 will be the beginning of his downfall. Or being the leader of the free world won’t be enough for Frank’s hubris and he’ll crave more control and more power; even if it means plunging the US into war with China.

Either way, I’ll be watching. And considering the fact that 2% of Netflix users (more than 600,000 people, roughly) binge watched the entire season in the US in it’s first weekend alone, I won’t be the only one watching. One nation, Underwood.

What did you think of Chapter 25? Let me know in the comments and make sure you check out all my other House of Cards related posts. Also, follow me around the internet with the links below.