Movie Review: The Hobbit: The Battle of the Five Armies (2014)

With the release of The Hobbit: The Battle of the Five Armies (formerly subtitled There and Back Again), Peter Jackson has completed his journey into Middle Earth. I’ve seen five out of the six installments in the theater and double dipped on owning the Lord of the Rings extended editions when they were released on blu-ray. While Jackson won’t rule out more Tolkien movies, I really do hope he calls it a day and lets Middle Earth rest on these six movies.

The first Hobbit movie (An Unexpected Journey) charmed me and felt a bit like revisiting an old friend. It made me excited for Jackson’s return to Middle Earth and eager for the journey ahead. With The Desolation of Smaug, however, there was a steep drop off in quality as I saw the chinks in the Hobbit’s armor. I felt that it was overlong and so filled with superfluous characters that it lacked any real emotional resonance for me.

The Battle of the Five Armies is more enjoyable and better paced than The Desolation of Smaug. I will give it that credit right off the bat. However, this conclusion to the trilogy is not without its orc’s share of faults. The movie is a definitive end to The Hobbit story but it stumbles along the way as Jackson and his team attempt to satisfy a wide range of audiences while sacrificing cohesion and engaging storytelling.

The movie picks up after Desolation of Smaug‘s cliffhanger and resolves the second movie’s storyline in its prologue. Given how Desolation ended, this was a total given going into Five Armies. Yet, when the title card reading “The Battle of the Five Armies” appeared on the screen, I was left genuinely wondering why the sequence I just watched wasn’t used to end the second movie. This peculiar feeling of disjointed storytelling and ill-fitting storylines never left me as the movie pressed on.

Thorin (Richard Armitage) spends much of the movie corrupted with Dragon Sickness by the gold he now has as the King under the Mountain. His greed becomes unquenchable and he becomes unhinged. Armitage performs the role well. The problem I had was that even though I’ve followed him through two movies before this, I just couldn’t connect to the character. His dark turn in this installment felt forced and precipitated by plot necessity rather than organic characterization. I haven’t read The Hobbit, so I don’t know how this plot development reads or if it’s even in the book. But the way it’s depicted in the movie is completely unearned and feels like filler.

Thorin’s bout with Dragon Sickness is but one narrative detour the film takes along its rocky and inconsistent storytelling. Gandalf’s (Sir Ian McKellan) side quest run-in with Sauron is incongruous with the rest of the movie and irrelevant to every other storyline in The Hobbit movies. The way it plays out onscreen reeks of a misguided attempt to connect The Hobbit movies with The Lord of the Rings. The result is a mess in a movie that was already well on its way toward besmirching the saga.

The most egregiously ill-fitting storyline in the movie was the love story with Evangeline Lilly‘s elf character Tauriel and her star-crossed dwarf love interest Kili (Aidan Turner). Like in Desolation, it relegated Legolas (Orlando Bloom) to a third wheel role in the love triangle. This alone is bothersome since the audience has more emotional investment in the Legolas character than Tauriel and Kili, yet Orlando Bloom is barely a featured player in the story.

Worse than Legolas’ status in this movie is the feeling that the Tauriel and Kili storyline simply doesn’t fit into the narrative. I don’t know what the motivation for including the storyline in the franchise was, but it feels overwhelmingly like someone in the production interfered. It felt like the storyline was written at the eleventh hour in order to make the movies more marketable to a broader demographic and fill out the runtime to fit a hastily decided 3-movie structure.

That’s how a lot of the movie feels, actually. Ryan Gage‘s Alfrid was the defacto source of comic relief throughout the movie. The cowardly character was written to bring levity to the violence and fighting that takes up a good portion of Five Armies‘ runtime. It works in that Alfrid is good for some laughs, but a severe script problem arises when you realize that it is his sole purpose for being in the movie. The comic relief felt shoehorned in and juxtaposing it with the fighting made it stick out in a bad way. 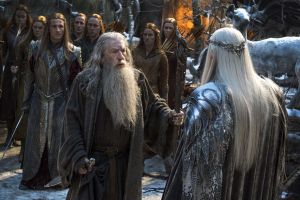 Of course, being that the title is “The Battle of the Five Armies“, the movie’s most redeeming quality is that it is rife with jaw-dropping action set pieces. A considerable chunk of the movie is devoted to all out war. The violence is very stylish and the choreography is some of the best in Peter Jackson’s movies. However, there are a handful of blemishes in the visual effects throughout that can cause a bit of distraction. Close-ups of the dwarf army’s leader in particular, veers into uncanny valley territory while Legolas running as a makeshift bridge collapses is awkward at best.

Aside from the battle sequences, The Battle of the Five Armies deserves a little more credit than I’ve been giving it throughout this review. The resolution of Thorin’s arc (and, by extension, Bilbo’s) is touching. Martin Freeman is so absolutely terrific as Bilbo that it made me wish there was more of him in this already somewhat bloated movie. The climactic fight between Thorin and Azog (Manu Bennett) is handled really well and pays off their conflict in a satisfying manner.

For all its faults, The Hobbit: The Battle of the Five Armies somehow manages to be paced well enough despite its shortcomings in the storytelling. I wasn’t bored during it thanks to what felt like most of the movie taking place in the midst of the massive titular battle. The action was exciting but it came at a price as the movie failed to develop key characters and included a halfhearted attempt to connect with The Lord of the Rings trilogy.

At the end of the day, The Hobbit proved to be too different from The Lord of the Rings. Unfortunately, Five Armies makes it clear that the discrepancy isn’t just one of tone, but overall quality alike.

Buy Digitally – Worth owning but doesn’t necessarily need to take up space on your shelf or garner a trip to your favorite DVD/Blu-Ray retailer.

This entry was posted in Matt Hurt's Columns, Movie Reviews and tagged 6.0, Buy Digitally, Movie Review, Peter Jackson, The Battle of the Five Armies, The Hobbit, the Lord of the Rings, there and back again. Bookmark the permalink.