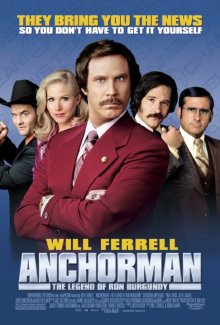 So for each of these posts, I will write a present-day review and then copy/paste the original review after. Then I’ll compare the two and give a summary at the end. You can find all the reviews here, follow me on Twitter here and check out The Obsessive Viewer Podcast here. Now, lets talk about Anchorman: The Legend of Ron Burgundy.

Adam McKay‘s Anchorman puts a hysterical spin on 70s news media and gender equality in the workplace. Will Ferrell is Ron Burgundy, the King of local television news whose world is rocked when Veronica Corningstone (Christina Applegate) joins the station, hoping to make a name for herself. The movie is stacked with rich, well-rounded supporting characters performed by a stellar supporting cast (Steve Carell, Paul Rudd, David Koechner, Fred Willard, Vince Vaughn and more). 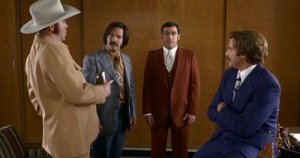 The thing that stands out the most to me about Anchorman is how it is so well balanced between being a satire, a vehicle and a farce. The movie isn’t reliant on one of the handful of specific comedic machinations it brings to the fold. Instead, everything pieces together cleanly without hampering the movie with too much of a good thing. Steve Carell is the shining example here as his dimwitted Brick Tamland is deployed at precise moments that play for ultimate comedic effect. Carell’s Brick exists in the goldilocks zone of comedy pacing, punctuating scenes without ridding the movie with exclamation points.

In its leading man, Anchorman displays Ferrell’s knack for disappearing into a character. Ron Burgundy is a self-absorbed local legend but Ferrell’s inherent likability and the way he plays off of Applegate’s performance gives an extra layer to the character. It prevents Anchorman from devolving into a post-SNL vehicle for Ferrell and gives the movie the opportunity to rally around the talent of its ensemble.

McKay and Ferrell’s script, sidled with a grand boost of improv from the supporting cast, delivers a hilarious experience that to this day still gets its well-earned laughs. The story hits a few different beats along the way that keep it from getting stale or relying on repeated gags as a crutch for weaker punch lines. Anchorman is one of the strongest comedies of its era.

Will Ferrell was funny in “Old School.” In “Anchorman” he is HILARIOUS!!

Will Ferrell. That is the only thing that needs to be said about “Anchorman: The Legend of Ron Burgundy.” The movie tells the story of Ron Burgundy (played by Ferrell) who is a newscaster in 1970’s San Diego. He is the king of the news world and suddenly finds himself competing with his new female co-anchor Veronica Corningstone (Christina Applegate).

The first half of the film is filled with hilarious moments by Ferrell and company. Will Ferrell does a fantastic job and I am eagerly awaiting the day that he turns his sights to dramatic portrayals a la Tom Hanks or Jim Carrey. Ferrell was funny in “Old School,” but in “Anchorman” he is hilarious. There are so many moments that I couldn’t control myself. As far as Christina Applegate is concerned, she was alright. She was funny but couldn’t seem to keep up with Will Ferrell.

Ron Burgundy is the leader of a newscast team. The other members are Brian Fanatana (Paul Rudd), Brick Tamland (Steve Carell), and Champ Kind (David Koechner). Their antics are all pretty much hit or miss. Steve Carell, however, hit the most. He had quite a few hilarious moments and really seemed to enjoy the character. Paul Rudd and David Koechner, unfortunately, were forgettable.

After the first half, the film kind of drifts off into a series of fairly ridiculous sequences that I found to be too over-the-top. There are a few surprising cameos that I will not spoil for you. If you can get past the brand of humor employed in the second half then you will be sure to find the charm that graced the first half. Overall I give this movie ***. It is Will Ferrell at his best and his fans will not be disappointed.

“Will Ferrell. That is the only thing that needs to be said about Anchorman: The Legend of Ron Burgundy.” – Matt Hurt, 2004

I’m really embarrassed about how many sweeping declarations I made in my reviews as a teenager. 18 year old me was full of hormones and called ’em like he saw ’em. Unfortunately, he didn’t see much apparently.

I struggled a little with my 2014 review because it is a beloved comedy for me and it’s become a little larger than life. The sequel didn’t work that well for me so revisiting the original for this review series was something I was a little nervous about. Obviously I still enjoyed it. In fact, judging from the ratings, it’s aged very well.

I’m surprised to see 18 year old Matt discredit the supporting roles so much, though. I don’t know what my issue was with Rudd and Koechner but I wouldn’t dare call them hit or miss in the movie now. I don’t know what my problem with the second half of the movie was either. My best guess is that I wanted more of the same. A decade later, I recognize how important the pacing is and how bad the movie could have been.

I’m surprised how low I rated this movie in 2004. I’m curious how I’ll feel about Anchorman 2: The Legend Continues in 2024. 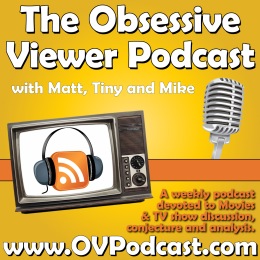