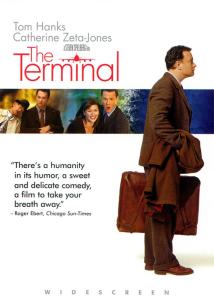 So for each of these posts, I will write a present-day review and then copy/paste the original review after. Then I’ll compare the two and give a summary at the end. You can find all the reviews here, follow me on Twitter here and check out The Obsessive Viewer Podcast here. Now, lets talk about The Terminal.

In 2004’s The Terminal Tom Hanks plays Viktor Navorski, an Eastern European immigrant whose plane lands in New York City shortly after his home country of Krakozhia undergoes a coup. Now that the U.S. government can’t recognize his country, Viktor is relegated to the International Lounge terminal of JFK until Customs can figure out what to do with him.

The Terminal is packaged as a feel-good movie about a man so lost in translation that he can’t comprehend it when the tough guy customs agent (Stanley Tucci) is giving him a way out of his predicament. Tom Hanks sells Viktor and his journey well through a performance that could have been severely hampered by the story’s reliance on Viktor’s inability to communicate. Nevertheless, Hanks gives a touching and believable performance here.

There are, however, several problems with The Terminal.

Stanley Tucci plays Frank Dixon, a Customs agent on the cusp of a big promotion. He’s told early in the movie that he is going to be under heavy scrutiny as his bosses vet him for his new position. When Viktor Navorski arrives, Dixon goes to great lengths to sweep him under the rug and pawn him off onto other agencies.

Tucci’s storyline doesn’t ring true for me at all. The movie presents his motivations for covering up Viktor as being guided by his desire for the promotion. Yet, he needlessly breaks protocol and acts with inhumane malice in his efforts to brush Viktor off his hands. When Viktor realizes he can get quarters by retrieving carts, Dixon’s response is to hire a person to retrieve carts in an effort to “starve Viktor” off of the premises. Earlier in the movie, Dixon pulls guards away from an exit (in post-9/11 JFK) specifically so Viktor will leave.

This anachronistic behavior makes Stanley Tucci’s character needlessly villainous and difficult to take seriously. Dixon isn’t given a reason or purpose for being hotheaded, except for the impending promotion. But it’s far too much of a stretch to think someone who’s willing to go to such lengths wouldn’t stop to consider how the people vetting him would see his actions toward Viktor. Even worse is that he was warned about the vetting process in the beginning of the movie. Instead, the character simply feels like a manufactured antagonist for Viktor and the result is a really clunky narrative.

That’s not the only area where The Terminal failed to take off. Catherine Zeta-Jones plays Amelia, a flight attendant who takes a shine to Viktor. Their romantic subplot plays out in a formulaic and one-note path. Much like Tucci’s promotion, Amelia’s only bit of characterization comes in the form of her romantic tryst with a married man. When she meets Viktor, she’s upfront about the fact that she’s a mess emotionally, but she’s very quick to blame men for her troubles.

Amelia is a very one-dimensional character. There’s a scene where she and Viktor are browsing a bookstore and she makes the comment that she reads anything “with men killing each other.” The pair’s meet-cute scene is awkward and flat. Amelia tells Viktor that Napoleon tried to poison himself but took so much poison that it didn’t kill him (it helps that the movie doesn’t try to pass this as fact). Viktor, only grasping fragments of the anecdote tells her in broken English, “He need read bottle”, referring to a prescription bottle. Amelia is charmed because “Napoleon was actually far-sighted.” It’s a really forced scene that made it hard to buy their relationship.

Aside from the romantic subplot with the overbearing “all men lie” (actual dialogue) philosophy of the female lead, The Terminal features a handful of supporting characters who become Viktor’s friends. Kumar Pallana and Chi McBride play airport employees who befriend Viktor. There’s also Diego Luna as Enrique, a mailroom worker who enlists Viktor’s help in a plan that is any other movie would be creepy and stalker-ish. 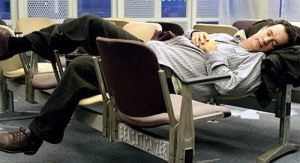 The Terminal is a feel-good movie and, in that respect, it does have its charms. There’s sweetness in Viktor Navorski and his struggles in an unfamiliar land. All of that comes from Tom Hanks’ charming performance. The rest of the movie just didn’t deliver. There’s a subplot involving a can that Viktor carries with him. It’s not until late in the movie that we’re not given the significance of the can but when it’s revealed, I couldn’t help but think the story behind it would have made an overall better movie.

Rent Digitally – Worth spending money on a temporary copy but not necessarily worth the effort of leaving your couch.

“The Terminal” is the third collaboration between director Steven Spielberg and actor Tom Hanks. It tells the story of Viktor Navorski, an immigrant from the fictional country of Krakozhia. Upon arriving at JFK airport in New York City he finds himself in a bit of a pickle. Before his plane landed, there was a military coup in his country that resulted in a change of government. This makes his passport void and forces him to wait in the airport until the situation gets sorted out. The premise sounds far fetched and the fact that the idea came from an actual man’s experience of having to live in an airport was interesting.

I loved this movie. When the tv spots for the film exclaimed that Tom Hanks’ performance was his “best since Forrest Gump” it was not lying. Hanks was incredible in his role and easily made us love the character. Catherine Zeta-Jones is Amelia Warren, the flight attendant that Viktor falls in love with. She has trouble with relationships and fails to find the right men; enter Viktor. Stanley Tucci is the antagonist of the film. He is Frank Dixon whose constant attempts to release Viktor to New York City backfire in rather comical fashions. He is a great character and Tucci’s performance gives us another reason to root for Viktor.

This would be a five star film in my mind if the ending didn’t leave me with the thought of, “that’s it?” Perhaps I am too brainwashed by Hollywood but this film had a semi-unconventional ending. The ending was not formulaic like many other romantic comedies and still left me satisfied but not to the extent that I thought the film merited. Maybe it is just me but I was just a little disappointed with one minor event in the third act. Overall, close to everything in the film is perfect. I would love to give “The Terminal” ***** and I would if it weren’t for my initial reaction to the ending. So I feel I have to give this fantastic romantic comedy a ****1/2 rating, and I am not too big a fan of romantic comedies.

I’m kind of shocked. This might be my least favorite 2004 review yet. For starters, I don’t say much of anything about the movie. That was pretty common of 18 year old Matt, sure. But this is pretty ridiculous, especially since I spoke so highly of it.

What surprises me most about it, however, is I genuinely don’t remember feeling this strongly about the movie when I saw it a decade ago. I was working at the movie theater at the time but I had seen plenty of free movies up to that point. So I don’t think my apparent love of the movie came from the excitement of seeing a movie for free.

I don’t know. I’ll chalk this one up to me being weirdly excited about a blurb I saw about Tom Hanks’ performance on TV. I guess.

“I am not too big a fan of romantic comedies.”