So for each of these posts, I will write a present-day review and then copy/paste the original review after. Then I’ll compare the two and give a summary at the end. You can find all the reviews here, follow me on Twitter here and check out The Obsessive Viewer Podcast here. Now, lets talk about The Butterfly Effect.

2004’s The Butterfly Effect was a poorly written vehicle for Ashton Kutcher to break out of the sitcom persona he cultivated for himself on That 70’s Show. It’s a heavy-handed drama/sci-fi thriller about Evan Treborn (Kutcher), a man who finds he can travel back in time and sets out to fix the mistakes of his past.

From the beginning, this movie seems to want its audience to take it seriously. Unfortunately, The Butterfly Effect‘s most dramatic moments are hampered by unnatural dialogue delivered in cringe worthy displays of over acting. The first act is even lit strangely; with a vibrancy that’s anachronistic to the tone of the story and gives off a certain cheapness to the filmmaking reminiscent of daytime soap operas.

The first act showcases the important points in Evan’s childhood that will become integral once he unlocks his time travel abilities. These sequences are laughably bad; especially when the movie transitions into their teenage years. The movie goes to forced and contrived lengths to show us what kind of teens they are to the point that their behavior in that first scene is the most stereotypical display of the “bad seed kids” archetype I’ve ever seen.

Nothing in the “teenage” era of the story is handled well or with any hint of subtlety. Tommy (teen: Jesse James; adult: William Scott Lee) is one of Evan’s friends and the brother of Evan’s love interest Kayleigh (teen: Irina Gorovaia; adult: Amy Smart). He’s a one-dimensional antagonist whose psychopathy is played with extreme force and excessive malice throughout the teen years’ storyline.

Jesse James (with no help from the script) is incredibly over-the-top. The movie creates multiple scenarios in which Tommy is shown to be all but pure evil and it culminates in an act of cartoonish villainy. Evan and Kayleigh happen upon Tommy in a junkyard and find him pouring gasoline on a dog. “That’s my dog!” Evan exclaims.

I won’t spoil what happens but the scene offers nothing creative to the story. It’s redundant given that we’ve already seen flashes of violence and aggression that has established Tommy’s psychopathy. The danger of the dog dying is played up despite the viewer having no attachment to the animal. Evan’s expository exclamation of “that’s my dog” is the first sign that he even has a pet. The resolution of this scene is melodramatic and unearned.

All of that is in the movie’s first act and I didn’t even touch on the storyline involving Evan’s mysterious father because I couldn’t be bothered to care about it. The Butterfly Effect is equal parts Ashton Kutcher vehicle and time travel movie. However, by the time Kutcher appears onscreen and the actual time travel is introduced, I was ready for the movie to end. 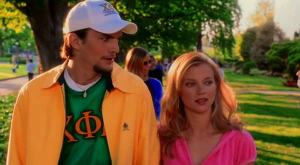 The movie destroyed the chance of the time travel being compelling by creating such an unlikable and emotionally vacant backstory. When Kutcher begins his journey to fix the past, he’s returning to storylines and situations I was happy to leave behind. The ramifications of his changes aren’t any better. The complete lack of subtlety in this movie results in alternate timelines that run the gamut of extreme cause and effect. Evan changes one thing and it makes his life perfect. Evan changes another thing and it inexplicably makes Kayleigh a strung out prostitute.

The extremes the movie goes through would be forgivable, even acceptable, if it was just a better product overall and constructed with some care and consistency in the writing. Instead, The Butterfly Effect starts weak and ends with no real payoff or sense. The complete and utter lack of subtlety makes the movie laughable before becoming a chore to sit through.

Catch it on TV – You might get a modicum of entertainment out of this if the network it’s on plays decent commercials with it.

“The Butterfly Effect (Director’s Cut)” takes a unique concept and seems to take every step to ensure that the finished product is terrible. The movie is about Evan Treborn, a 20 year old college student who shared a troubled childhood with his friends. The first half hour is used to set up his childhood while leaving certain holes to be filled in later for shock value. Evan suffered from black outs as a child and in the hopes of recovering his lost memories he kept journals. These journals, years later, opened up his ability to travel back in time to change his childhood. What follows is the butterfly effect at work in which every little change alters reality in unpredictable ways.

The script is the first to blame for this film’s downfall. I found myself laughing out loud at many of the scenes that were meant to show us Evan’s troubled childhood. That was only the beginning. When Evan first goes back to change his past he goes to one particular memory involving Kayleigh’s father. Evan prevents the incident by yelling and threatening the man. At the time of the incident Evan was 7 years old. Kayleigh’s father was suddenly intimidated by the young Evan when he began talking back to him. I found this ridiculous as the man so easily went from commanding the children to being terrified of Evan. Most of the exposition in the first half hour of the film got the same response from me.

I will admit that the film did get slightly better once the characters grew up and the actual time traveling began. However, it was only a small step up. The acting improved quite a bit from the childhood sequence, but the film was marred by the complete lack of chemistry between Ashton Kutcher and Amy Smart. Ashton Kutcher surpassed my expectations of his acting ability in the movie, if only slightly. His acting was still bad but it wasn’t terrible like I expected it to be. He delivered his lines with little to no emotion throughout most of the film which eventually got distracting.

I watched the director’s cut of the film which included a different ending than the theatrical version. I have read about the theatrical ending and was happy I saw the director’s cut. Even though neither ending is fantastic I prefer the one I saw, no matter how predictable it was, as it matched the dark tones that were present throughout the rest of the film. I give “The Butterfly Effect” a * rating. Despite the overwhelming word of mouth this movie has received I would advise everyone to stay away from it atleast until it is available conveniently on television.

My opinion of The Butterfly Effect didn’t change much. I actually think I did a better job (overall) reviewing it in 2004 than I did now. This time around I really harped on that first act. Can you blame me, though? It’s horrible.

Back in 2004, I was deeply entrenched in movie fan snobbery, having reviewed Kurosawa movies and buying Criterion Collection DVDs like it was my job. Something funny happened after seeing The Butterfly Effect, though. One of my assistant managers at the movie theater I worked at (who was maybe 4 or 5 years older than me) asked what I thought of it. I said I didn’t like it. He did. He asked me if I didn’t like it because “It made me think.”

I think I awkwardly said I didn’t like the kid actors in it and then later imagined me saying “I didn’t like it because it didn’t make me think. My favorite movie is Memento!” One of my favorite movies is still Memento and I still find The Butterfly Effect vapid. I wonder how he feels about it. 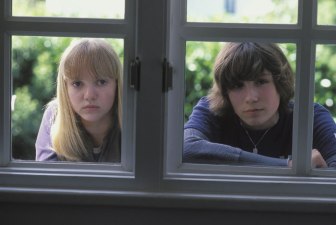 One final thought about The Butterfly Effect’s endings

There’s a subplot involving Kayleigh’s dad (Eric Stoltz) and pedophilia. It’s disturbing and by all accounts really should have been the linchpin for Evan’s past and the reason for time travelling instead of a dead dog and his girlfriend’s crazy brother. But it’s not and there’s only one scene where he tries to scare the dad into not abusing his children.

The end of the movie has Evan going back to his first meeting with Kayleigh and telling her he hates her and to stay away from her. The idea is that Evan is a negative part of Kayleigh’s life and everything will be okay if they never cross paths. But given what’s established in the haphazard prologue, Evan is really just leaving her to deal with the traumatic and scarring effects of her dad’s abuse.

It really makes Evan out to be a pretty horrible person.

Evan time travels back to the womb and strangles himself with his mother’s umbilical cord while she’s in labor. What the hell? And I said I preferred that ending in 2004? Wow.

Again, this ending shows how crappy Evan is as a person. To compare the two endings, in the theatrical ending he essentially left his girlfriend to be a victim of abuse from her pedophile father while in the director’s cut he put his mother through the monumental emotional pain of delivering a stillborn baby. Jesus Christ, Evan.

This entry was posted in Matt Hurt's Columns, Movie Reviews and tagged 2.0, Ashton Kutcher, Catch It on TV, Decade Reviews, The Butterfly Effect. Bookmark the permalink.