In what could be the biggest review series in the history of Obsessive Viewer, I’m committing myself to reviewing all the movies and shows in Marvel Studios’ Cinematic Universe. You can find an index of my MCU reviews here and check out The Obsessive Viewer Podcast here. Now, here’s my review of 2011’s Captain America: The First Avenger. Directed by Joe Johnston, Captain America is […]

In what could be the biggest review series in the history of Obsessive Viewer, I’m committing myself to reviewing all the movies and shows in Marvel Studios’ Cinematic Universe. You can find an index of my MCU reviews here and check out The Obsessive Viewer Podcast here. Now, here’s my review of 2011’s Captain America: The First Avenger.

Directed by Joe Johnston, Captain America is about Steve Rogers (Chris Evans), a scrawny guy from Brooklyn who’s constantly rejected for entry into the military during World War II. Upon meeting Dr. Abraham Erskine (Stanley Tucci), Steve is given a chance to become a super soldier. From there, he fights Hydra and the Red Skull (Hugo Weaving) with the help of his squad, the Howling Commandos.

Some of this movie’s detractors have issue with Captain America being a period movie. While I agree it’s a big change from the rest of the MCU, I think making the fifth movie in the franchise an origin story dampens the enjoyment of Captain America more than its setting. That’s not to say The First Avenger isn’t an enjoyable movie. In fact, upon rewatching it for this review series, I feel like it deserves more credit than I’ve given it in the past. However, it’s still far from the best that Marvel Studios has to offer. 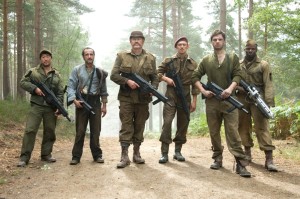 What’s more distracting to me than the origin story is The First Avenger‘s faux-gloomy, glossy color palette. It’s most evident in the movie’s first act that the CGI runs a bit overboard. Maybe this is a calculated choice to offset the CGI effects of Steve Rogers’ pre-serum body. Or maybe it’s a stylistic choice to show a Stark Industries dominated world of WWII-era technology. In any case, the result is an almost cartoonlike glow that distracts from the movie’s tone and atmosphere building.

Despite a bit of a drag through the middle (Cap sells war bonds…thrilling), The First Avenger is paced well enough. The origin story, while also a drag, is elevated by Steve’s relationship with Stanley Tucci’s character. Tucci’s Erskine becomes somewhat of a surrogate father figure for Steve and helps mold our hero’s extreme sense of morality. He’s important to the backstory of Red Skull and gets a nice, if brief, redemption arc.

The action set pieces are a pleasant mixture of super-powered action and WWII-era gunplay. The mix gives the action an eclectic feel that separates it from its many modern comic book movie counterparts. This in and of itself is such a rarity in the genre that it makes Captain America a more pleasant viewing than Thor or even Iron Man 2, to an extent.

Director Joe Johnston was a special effects artist who worked with George Lucas on Star Wars and Indiana Jones. That work is very evident in Captain America. Chase sequences with Cap on his motorcycle are very reminiscent of the speeder chases in Return of the Jedi. Cap chasing and subduing henchmen in a narrow corridor evokes memories of Star Wars. The very premise and setting surrounding WWII-era villains and Nazis gives the movie a distinct Indiana Jones feel.

While these are welcome homages, I can’t help but feel they’re overused and cause The First Avenger to have somewhat of an identity crisis at certain points. At worst, these homages come across as lazy stylistic choices, meant to borrow the tone of their original use instead of enhancing The First Avenger‘s style with a wink to the audience.

By the last act of the movie, The First Avenger becomes a war-set action movie with plenty of bullets and shield throwing. It all leads to a satisfying conclusion that closes the book on Cap’s WWII exploits and sets up The Avengers quite nicely. Yet, other than the methods of combat, there isn’t much for audiences to latch onto and make The First Avenger a very memorable outing for Marvel Studios. 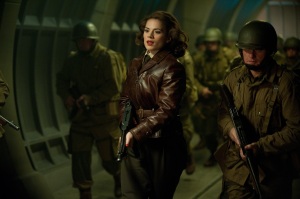 The movie is filled with plenty of easter eggs and setup for The Avengers. Captain America introduces us to the tesseract, which plays a central role in Joss Whedon’s movie. It also gives us important supporting characters that would go on to appear elsewhere in the franchise; particularly Agent Peggy Carter (Hayley Atwell), Howard Stark (Dominic Cooper), and Bucky Barnes (Sebastian Stan).

Captain America: The First Avenger had a lot resting on its shoulders when it was released in 2011. For one, it is the introduction of one of Marvel’s most iconic characters into a sprawling universe that had somewhat of a mixed bag of entries up to that point. Another thing on the line was that this was the last MCU movie before the massively hyped team up movie a year later.

Buy Digitally – These movies are worth owning but don’t necessarily need to take up space on your shelf or garner a trip to your favorite DVD/Blu-Ray shop.