“Who can resist a murder selfie?” – Jake Find all my reviews of MTV’s Scream here. Every once and a while I’ll do something for the blog or the podcast without thinking about what exactly it means for me in terms of workload. I’m excited about the various irons I have in the fire. However, the Scream TV show review […]

“Who can resist a murder selfie?” – Jake

Find all my reviews of MTV’s Scream here.

Every once and a while I’ll do something for the blog or the podcast without thinking about what exactly it means for me in terms of workload. I’m excited about the various irons I have in the fire. However, the Scream TV show review series may be my undoing.

Episode 2 of Scream’s premiere season (it was announced this weekend that season 2 is confirmed) made me cringe on the writers’ behalf. I’m 29 years old and I can honestly say that I’ve never seen a single episode of television so filled with trendy buzzwords as “Hello, Emma.” was.

The script for this episode is packed with trending topics, hash tags, podcasts, gifs, and selfies. It was buzzword overkill and felt like the Scream writers were struggling to find a way to relate to their core demographic of teen MTV viewers. It comes across as desperate and I was #unimpressed.

It wasn’t just buzzwords that felt forced in this chapter of the teen slasher series. “Hello, Emma.” introduces a new character to the mix in the form of Piper Shay (Amelia Rose Blaire), a well-known reporter with a popular true crime podcast who arrives in Lakewood to cover the murders for her show. I hesitate to say this is a thinly veiled reference or homage to Sarah Koenig’s breakout hit Serial podcast, because it isn’t veiled in the slightest. Like everything we’ve seen thus far in Scream, it lacks subtext, it lacks subtlety. The writers and producers of the show know that Serial was a massive hit and decided to take the opportunity to shoehorn it into their show so Scream will be “current.” It’s lazy and incredibly boring storytelling.

Of course, I’m a little biased when it comes to this Serial rip-off in Scream. Ever since Serial, it seems as if every reference to podcasts and podcasting in pop culture is in reference to or a knock off of Serial. Serial was a breakout hit for a reason. It was compelling and it proved how great podcasting is as a journalistic and narrative tool. But it doesn’t represent what all of podcasting is and that’s something that pop culture hasn’t been bothered to notice.

But I’m not here to rant about how podcasting is referenced in pop culture. (And for the record, I’m happy with where podcasting is heading.) I’m here to talk about Scream. So when we ignore the forced attempts to get the demographic interested, how was episode 2?

It surprisingly wasn’t horrible. We’re given a somewhat weak resolution to the question the pilot ended on (what was that red stuff smeared on Noah’s forehead) early in the episode. It was paint as he wrote the intentionally misspelled “DOOSH” on Jake’s truck as retaliation for the stunt Jake and his jock friends played on Noah in the premiere.

It was somewhat weak in the way it handled misdirection but led to some good character beats for Noah. As I said last week, Noah is the only character I can really get behind. In the pilot, that was mostly due to residual affection for Randy in the original movie. In “Hello, Emma.” however, Noah grows into his own character. Though he’s still shackled to his archetype, Noah’s sheepish and awkward romance with Riley reaches an entertaining milestone. When she invites him to the football field, I actually found myself worried that he would be killed. I count that as a big step up from the pilot where I hated every character.

The episode begins with the death of Audrey’s lover Rachel at the hands of Ghostface. (Do we call the killer Ghostface since he’s technically not wearing the Ghostface mask?) It’s an effective setup and enjoyable kill as Rachel receives a call from Audrey that leads her to her balcony where a noose is waiting for her. As entertaining as this was, it was a step back from the gore of Nina’s death in the pilot.

It also introduced an annoying element to the killer’s MO. The voice-changer. The Scream franchise has its iconic voice on the other side of the phone calls. The deep, grave voice that was performed so perfectly by Roger Jackson in the movies is as much a part of the Scream mythology as the mask. However, in addition to using a new mask, MTV’s Scream is utilizing a different voice actor for the phone calls. 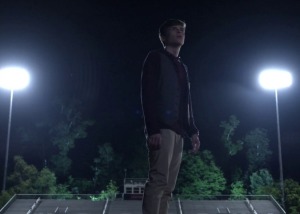 That in and of itself, isn’t so bad. Mike Vaughn‘s work in the show so far is a perfectly suitable substitute for Jackson. However, the issue I have is that the voice changer wasn’t used for the Rachel phone call. This means that either Audrey is the killer (sure, that would make sense from a motive standpoint) or the series is using the much maligned multiple voices voice changer that was used in Scream 3 and then scrapped from Scream 4.

Scream 3 is the low point of the movie franchise for me and one reason for that is the voice changer. The killer was able to fool his victims with what came across as a sci-fi device that was able to manipulate the voices of other characters. It was hokey and ridiculous in the movie and the thought of teenagers now having access to this plot-convenient technology will push MTV’s Scream into unforgivable territory for me.

Elsewhere in the episode, Emma deals with the fallout of her tattered relationship with Will and actually tells him about kissing Kieran. The relationship drama is actually pretty palatable and managed to hold my attention. It left me with the thought that maybe there’s hope for Scream yet.

The episode concludes with an overall satisfying phone call to Emma from the killer. For its many, many faults, I have to give MTV’s Scream credit for an enjoyable and tense phone call scene. Granted, it apes the original movie’s opening phone call to Drew Barrymore’s Casey Becker a little too much, and lacks any real payoff in the grand scheme of the episode. But the atmosphere and the dialogue is of the quality I’d hope for in a Scream television show.

So, who’s the killer?

Last week I guesstimated that Mr. Branson may be the killer. I still stand by that fairly shaky assessment. If the killer is revealed to be Audrey, I wouldn’t be that surprised, I guess. But given the dialogue at the end of the episode, the motive for the killer is more deeply rooted in the Brandon James mythology of the town and I just don’t think a teenager would have that many ties to it.

Although, it’s possible that Audrey (or any other teenager in the show) is the child of Brandon James and is killing off the teenagers because their parents deprived them of a father. The show is really playing up the rift between Emma and Audrey. Could they be half sisters? The killer did tell Emma that her family has lied to her. And the (presumably) multiple voice-changer in the beginning of the episode tells us the writers don’t mind borrowing from the franchise’s lackluster third entry.

Either way, here’s hoping Jake gets killed off next week (or, rather, tonight since I was late posting this review). I still really can’t stand that guy.