In what could be the biggest review series in the history of Obsessive Viewer, I’m committing myself to reviewing all the movies and shows in Marvel Studios’ Cinematic Universe. You can find an index of my MCU reviews here and check out The Obsessive Viewer Podcast here. Now, here’s my review of this year’s Avengers: Age of Ultron. Avengers: Age of Ultron is Marvel Studios’ […] 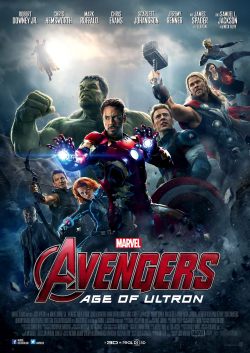 In what could be the biggest review series in the history of Obsessive Viewer, I’m committing myself to reviewing all the movies and shows in Marvel Studios’ Cinematic Universe. You can find an index of my MCU reviews here and check out The Obsessive Viewer Podcast here. Now, here’s my review of this year’s Avengers: Age of Ultron.

Avengers: Age of Ultron is Marvel Studios’ second big team up movie. It brings back the team in front of and behind the camera of Joss Whedon‘s 2012 hit The Avengers. This installment pits the Earth’s mightiest heroes against Ultron, an AI bent on destroying not only the Avengers, but the human race as well.

Fans of Marvel’s Agents of S.H.I.E.L.D. will appreciate the opening sequence of Ultron. The sequence is an impressive action set piece with the team making an assault on a Hydra base. The Agents of S.H.I.E.L.D. season 2 episode “The Dirty Half Dozen” leads into the opening sequence of Ultron for a nice bit of cross platform symmetry. But from there, the Marvel Studios series is fairly inconsequential.

Age of Ultron hits its marks fairly well throughout its near 2 and a half hour runtime. Tony Stark (Robert Downey Jr.) convinces Bruce Banner (Mark Ruffalo) to use tech from Loki’s scepter to give new life to a dormant peacekeeping program they were working on. That program becomes sentient and tries to destroy the world.

As far as big budget popcorn action is concerned, Age of Ultron comes with plenty of appetizing spectacle. Whether the team is invading a Hydra compound, tracking Ultron in Africa, or evacuating a city, the action is well shot and coherent. Whedon doesn’t up the ante from the original installment in terms of scale, but there is enough variety throughout the movie not to bore audiences.

James Spader voices Ultron but he isn’t the menacing villain the movie’s marketing would have you believe him to be. He’s got his goal and he’s almost too powerful in the ways he tries to achieve it. But as a creation of Tony Stark, Ultron adopts a lot of the humor and personality of the genius billionaire. It’s a lot to take at times. Ultron’s goal is to destroy humanity and his more diabolical scenes of dialogue are somewhat sniped by quick one-liners. At times Ultron seems to struggle with his identity, but it doesn’t lead anywhere worthwhile to me. His humor got laughs from me, but it left me wanting.

That’s not the only part of the movie that let me down. There are long, dull stretches where Thor (Chris Hemsworth) goes on an errand to discovery the secret of the infinity gems. It’s shoehorned into a plot that already runs the risk of being overburdened with a surplus of characters and subplots new and old. Worst of all, this subplot seems to exist solely to lay the groundwork for Avengers: Infinity War, Thor: Ragnarok and Phase Three of the MCU. It leaves the impression that Avengers: Age of Ultron is a stepping-stone instead of the culmination that 2012’s The Avengers was for Phase One.

Ultron is a crowded movie, but luckily a lot of the many subplots actually land fairly well. The introduction of the “twins” Pietro and Wanda Maximoff (Aaron Taylor-Johnson as Quicksilver and Elizabeth Olsen as Scarlet Witch) to the MCU is handled well. Their motivations are clearly defined, although a personal grudge that drives them is somewhat dull and tired. When they’re view of events is widened they react realistically and in a way that really made me appreciate Whedon’s handling of the story. 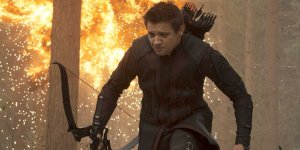 Whedon’s script isn’t pristine, however. There’s a very awkward amount of energy placed on Hawkeye (Jeremy Renner) and his backstory. As a character, I enjoy Hawkeye and see him and Scarlett Johansson‘s Black Widow as two underutilized pieces of the Marvel Cinematic Universe. Naturally, I should love the characterization given to Hawkeye in this movie.

Unfortunately, Whedon’s Hawkeye moments are a parlor trick and less about giving an underdeveloped character his due and more about subverting audience expectations. That alone is acceptable and even respectable. But the audience expectations that Whedon is toying with in Ultron aren’t based on narrative structure or comic book movie tropes. Instead he’s recognizing his specific brand of storytelling and toying with the expectations of audience’s that know his specific tricks. The result is a surprise dependent on Whedonesque narrative structure and something that I’m afraid doesn’t hold the mass appeal needed to be taken seriously.

However, when it comes to a subplot involving Banner and Black Widow, I believe what’s happening and found myself enjoying Ruffalo and Johansson’s scenes together. The subplot somehow feels like a natural progression from the first movie despite taking a couple big unseen steps in development between 2012’s movie and now. Both characters are tortured souls however, and one scene in particular where Natasha/Black Widow lowers her guard to Bruce feels like a very natural and human scene between them. It carries a surprising amount of heart in a summer blockbuster. 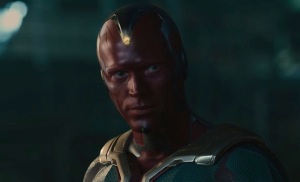 Finally, the introduction of a new character in Paul Bettany‘s The Vision takes up a considerable amount of the movie’s runtime. It’s handled surprisingly well and gives Ultron and The Avengers something to fight over without creating a macguffin. The Vision matters and manages to shake up the dynamic of the team itself in a fun, crowd pleasing way. Knowing next to nothing about the comic book mythology of The Avengers, yet knowing The Vision is a big part of it, I found Bettany’s physical entrance into the MCU surprisingly accessible and to the point. I look forward to what Marvel Studios has in store for that character.

Age of Ultron‘s climax is as action packed as they come. However, some of the mechanics of what exactly was happening became slightly muddled. Each Avenger has a different role to play in the battle. The roles weren’t clearly defined for some and for others the script seemed to stretch their importance to the battle. But the action itself was well-shot and fun to watch.

Avengers: Age of Ultron is less about the culmination to Phase 2 of the Marvel Cinematic Universe and more about setting up further entries in the franchise. It introduces a lot of subplots and some new characters that run the risk of stretching the audience’s attention to the brink. Some subplots work well while others fall by the wayside. However, the packaging and presentation of the action still gives you enough bang for your buck and will leave you overall satisfied until the next team up movie is here.