Vacation shares some surprising similarities with Jurassic World. Both are pseudo-reboots of decades-old franchises masquerading as sequels that both feature amusement parks with velociraptors. Of course, in Jurassic World the velociraptor is the only character with meaningful development whereas Vacation‘s velociraptor is a roller coaster. However, their biggest similarity is the fact that they both missed their marks completely. Vacation […]

Vacation shares some surprising similarities with Jurassic World. Both are pseudo-reboots of decades-old franchises masquerading as sequels that both feature amusement parks with velociraptors. Of course, in Jurassic World the velociraptor is the only character with meaningful development whereas Vacation‘s velociraptor is a roller coaster. However, their biggest similarity is the fact that they both missed their marks completely.

Vacation introduces us to grown up Rusty Griswold (Ed Helms), now a regional airline pilot with an unhappy wife Debbie (Christina Applegate) and two sons James and Kevin. James (Skyler Gisondo) is a bleeding heart teenager while Kevin (Steele Stebbins) is his foul-mouthed younger brother and bully. When Rusty overhears Debbie telling a friend that she hates taking their same cabin vacations every year, Rusty decides to take his family on a road trip to Walley World like his father did 30 years ago.

What follows is a 90-minute string of weak comedy setups that lead to more misses than hits in their punch lines. The family gets put through the wringer as they endure setback after setback in (to the movie’s credit) a wide variety of situations. But the detours in the trip feel forced and the weak script gives way to overall awkward performances.

Ed Helms’ Rusty is an uncomfortable character both from the audience’s viewpoint and in his own skin. Helms’ iteration of the character (he’s the sixth actor to tackle the role) is bumbling and obliviously naive but he’s in the shadow of Chevy Chase’s performance as Clark in the original movie. Chase commanded the screen with a misguided confidence that was clouded by loveable ignorance. Rusty in this movie is as insecure as he is stupid and it’s just not very endearing.

Rusty and Clark are obviously not the same character nor are they supposed to be. Yet, Rusty’s insistence on recapturing the magic of that trip to Walley World 30 years ago (despite, you know, being a nightmare) harkens back to the family bond themes of the original movie and its sequels. 2015’s Vacation invites the comparisons to its predecessor while simultaneously doing little to honor it in any significant way.

Yet all of this would be forgivable and the movie would be far more watchable if only it were funnier. There are laughs to be had in Vacation. Let me make it clear that there are some really funny bits in the movie. For instance, Rusty’s misguided attempt to wingman his son as he talks to a girl was hysterical to me. The family’s detour to visit Aunt Audrey (Leslie Mann) and her conservative meteorologist beefcake husband (Chris Hemsworth) has some of the most consistently funny gags in the movie.

But the stretches between genuinely funny gags are filled with awkward moments of forced family interactions and weak character growth. I appreciated the development of James and thought Gisondo played the awkward teenager reasonably well. However, the little brother bullying him throughout the movie marred his development. It’s one note that keeps being struck until the inevitable comeuppance takes place. The scene where James grows a backbone is funny in its own right, but being the resolution of the most consistently unfunny and annoying aspect of the movie damages the humor in it.

There’s a pretty flimsy relationship story between Rusty and Debbie that tries for light poignancy but falls flat like much of the rest of the movie. The heart-to-heart this subplot leads to between the couple and Rusty’s parents (Chevy Chase and Beverly D’Angelo in brief appearances) is maybe the most satisfying moment of the movie. But even that comes at the price of seeing Chase lazily attempt what was once his perfectly timed fumbling space work shtick and now plays like an halfhearted attempt at nostalgia.

Vacation was released on July 29th, exactly 32 years after the release of National Lampoon’s Vacation. Fans who revere the original will detest this movie while casual Griswold fans might find it just short of a mediocre comedy. For people with no feelings for the franchise they may justify the sparse laughs by appreciating the 90-minute break from the summer heat in a cool theater.

In any case, Vacation likely won’t leave a lasting impression despite having two or three genuinely funny moments. 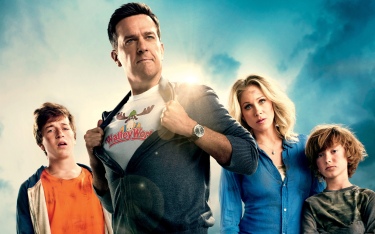