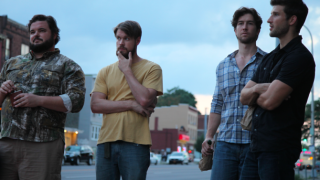 In Fourth Man Out, 24 year old Adam (Evan Todd) struggles with how to tell his best friends and his family that he’s gay. That’s the setup for Andrew Nackman‘s surprisingly poignant comedy exploring homophobia and the universally awkward feeling of dating in your mid-twenties.

The film spends the perfect amount of time on Adam’s struggle to build up the nerve to come out. His comic struggle to find the right moment also serves as an introduction to his friends Chris, Ortu, and Nick. In the group’s first scene together I was a little put off by the characters. They seemed almost generic in their “bro” antics. However, within a couple of scenes I warmed up to them and found myself really enjoying the chemistry the four of them had with each other.

The aforementioned “bro” behavior actually proved to serve the greater story being told. Fourth Man Out uses “bro-mophobia” to subvert casual homophobia in a fresh and hilarious way. The guys can be obnoxious, but they obviously care about their friend and what he’s going through. Through the relationship of Adam and his friends, the movie tells an engaging story about what happens when something changes a strong dynamic.

The movie also examines Adam’s awkward and frustrating experiences dating men publicly for the first time in his life. This is where Fourth Man Out‘s social commentary is at its sharpest. Adam finds himself in painfully awkward first date situations that people with any sexual orientation can relate to. Setting the film around the Fourth of July doubles down on this positive message of unity and universality that the movie handles so well.

Of Adam’s group of friends, Chris (Parker Young) is the focal character. Chris has trouble adjusting to Adam’s news and finds himself struggling with his own identity as a result. Propelled by a date gone awry, Chris sets out to help Adam during this difficult time. This comes with fantastic and hilarious bits of social awkwardness played really well by the two actors.

Fourth Man Out is as much about a man coming out of the closet as it is about how his best friends try to help him overcome his shyness. This gives the movie a ton of heart and an earnestness that carries through to the end. What’s most impressive is that the movie does all of this without compromising the comedy. Fourth Man Out is funny and heartwarming all the same.