Aside from a few scant comedy beats and a delightfully over the top performance from Jim Carrey, Sonic the Hedgehog feels like a slapped together adaptation of a video game franchise for which no one seemed to be clamoring. 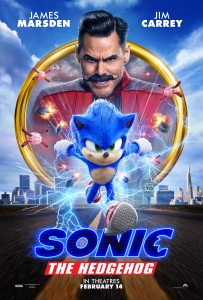 Premise: After discovering a small, blue, fast hedgehog, a small-town police officer must help it defeat an evil genius who wants to do experiments on it.

Sonic the Hedgehog has finally raced its way into theaters after a highly publicized face lift in the visual effects department. Despite the publicity, however, Sonic is mostly dead on arrival. Aside from a few scant comedy beats and a delightfully over the top performance from Jim Carrey, Sonic the Hedgehog feels like a slapped together adaptation of a video game franchise for which no one seemed to be clamoring.

The film begins with one of the loosest exposition dumps in recent memory. Sonic (Ben Schwartz) quickly tells us the story of how he came to Earth with nary a scrap of context. There’s an owl on his planet who he (lazily) describes as being like his Obi-Wan Kenobi. There’s an attack by a group of villains and Sonic is sent to Earth. That is the full extent of Sonic’s backstory and all the information we get about him pre-Earth. In the grand scheme of things, it doesn’t matter. But that just makes it all the more bewildering that it’s in the movie at all.

Ten years after his arrival on Earth, Sonic lives a solitary life hidden from humanity. He spends his days stalking people of the town of Green Hills and engaging in voyeuristic activities to keep his sanity. It’s strange. Inciting incidents occur and he ends up teaming up with James Marsden’s Tom to escape from and take down Carrey’s Dr. Robotnik. It’s a very rudimentary plot that offers very little in the way of surprises.

Once you get past the best “fast moving” baseball game sequence since the first Twilight movie (and a really cringe-inducing Olive Garden product placement spot) the action isn’t all that bad. While there isn’t much unique about a fast hedgehog taking out CGI drones, there is something to Sonic’s characterization that enhances the action slightly. Sonic isn’t a superhero. As such, he’s not overly confident in his abilities. It’s something that isn’t explored very much, but it’s not like his friendship with Tom is interesting enough to stand on its own in the film.

Sonic the Hedgehog is at its most charming when it becomes a road trip movie with Sonic and Tom, oddly enough. This is where Ben Schwartz’s fun-loving energy and comic sensibilities are used best. Elsewhere, the comedy falls flat every time and the quips feel like first draft jokes.

Jim Carrey’s performance is really the best thing Sonic the Hedgehog has going for it. Fans of Carrey’s more goofy comedy style from the 90s will be happy with just how crazy over the top he is here. If it wasn’t a movie about an alien hedgehog with speed abilities and magic coins, it could be said that Carrey is acting in a completely different movie than the rest of the cast. However, the movie is just weird enough to accompany Carrey’s crazy performance.

Sonic the Hedgehog doesn’t have much of anything fresh to offer audiences. You know what you’re getting when you go in and, for the most part, it does a passable job delivering on that promise. Unfortunately, the comedy doesn’t land often enough and the action, while serviceable, is ultimately unfulfilling. It’s not offensively bad by any stretch. But you’re unlikely to remember any details from Sonic the Hedgehog more than a few weeks after seeing it.