Frankenstein infuses its monster with a science fiction hue to great effect. The scientific and moral concepts at the heart of Frankenstein help enhance the wonderful characterization and tragedy-laden arc of the film’s titular character and his complicated monster. 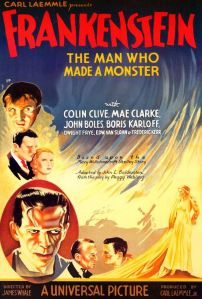 Premise: An obsessed scientist assembles a living being from parts of exhumed corpses.

James Whale’s 1931 adaptation of Mary Shelley’s Frankenstein was released in the same calendar year as Dracula. Together, the two films kicked off the Universal Monsters’ reign in cinemas. While both are similar in their Gothic horror aesthetics, Frankenstein infuses its monster with a science fiction hue to great effect. The scientific and moral concepts at the heart of Frankenstein help enhance the wonderful characterization and tragedy-laden arc of the film’s titular character and his complicated monster.

Colin Clive was just 31 years old when Frankenstein was released. As such, his portrayal of Dr. Henry Frankenstein serves the dual purpose of showcasing a mad scientist and the arrogance of his youth. Clive handles the mad scientist role with great aplomb as Frankenstein ignores his moral compass in pursuit of becoming a god. When the character is forced to come to terms with the horror he eventually unleashes, Clive imbues Frankenstein with the humanity he wisely withheld from the first half of the film.

In addition to being an iconic line, the famed “It’s alive” moment is the perfect summation of Dr. Frankenstein’s madness. His exclamation that he now knows what it’s like to be God and the way Clive delivers the line packs a strong punch behind it. He’s delirious in his victory but also consumed by the power it has given him. It’s almost orgasmic for the character and, in that regard, it bears a slight resemblance to Dracula’s more controlled but eager reaction to Renfield’s papercut in Dracula. The common thread of desire outweighing morality (or even a total lack of morality) in both films make for a strong double feature.

As much as Dracula was a showcase for Bela Lugosi’s performance, Frankenstein gives a much deserved spotlight to the phenomenal talent of Boris Karloff as the monster. The role requires Karloff to pull off vacant and emotive expressions simultaneously. His performance manages to terrify and humanize him. It’s a delicate balance that Karloff handles wonderfully. The terror of the monster comes specifically from the unknown element and the innocence of the creature. Moments where the monster shows his growing humanity quickly turn into the most threatening and frightening moments of the film. This is due entirely to Karloff’s range as a performer.

Frankenstein looks gorgeous as well. Like Dracula before it, the set design goes a long way to establish the tone of the film. The castle and nearby village look glorious when populated by villagers or subjected to aggressive weather effects. The chamber in which Frankenstein conducts his grand experiment is lively with electrical devices and flashing lights that emphasizes the science fiction side of the film. Considering that Frankenstein was made in an era before jump scares and overdone effects, it makes the effectiveness of the set design and every bit of ambiance it provides feel so purposeful and directly related to the plot.

As a morality piece, Frankenstein raises fantastic questions and creates in itself a strong ethical dilemma. The story questions what makes someone human, what separates a man from his nature, and what one is willing to sacrifice within themselves in the name of scientific discovery. When the monster is terrorized in captivity, his tormentor faces the consequences for it. This raises an interesting conundrum as to whether the monster’s actions were from provocation or if violence is in his very nature.

The film ramps up in its final act as we see the monster descend upon humans in a village. This leads to fascinating displays of horror in broad daylight, detailed village sets, and a depiction of mob mentality that is, sadly, timeless in its relevance. The incident that incurs the wrath of the villagers is shocking and leads the audience to question the very nature of the mob and what the correct course of action would have been.

By the end of the film, the audience is left with a surprising amount of subtext to dig through and moral quandaries to ruminate on. In creating Frankenstein, James Whale and company took a timeless piece of literature and adapted it into an equally timeless film.