Making its world premiere at Indy Film Fest 2020, HUM is a cerebral dance through an ethereal landscape of grief, regret, and the doubt that’s cast by overwhelming existential uncertainty. 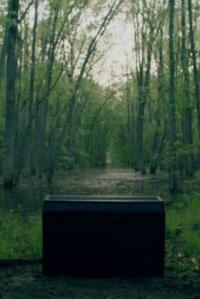 Premise: Two years ago, a Chest appeared in the woods. It could not be moved. It could not be opened. Its contents were unknown. The Dead began to appear within the week. Today, David Parker, a police trainee, is tasked with guarding the Chest. For the first time since its arrival, the Chest has opened.

Making its world premiere at Indy Film Fest 2020 (along with a Q&A with the filmmakers), HUM is a cerebral dance through an ethereal landscape of grief, regret, and the doubt cast by overwhelming existential uncertainty. The film follows David Parker (Tyler Ross), whose sister Grace (Sierra Miller) passed away following indoctrination into a cult. When a mysterious chest in the woods opens and hurls David into a physical and psychological entrapment surrounding it, he finds himself confronting the pain of his family’s loss directly as a seemingly supernatural force transports him through his past experiences.

HUM tells its story in a chaos-ridden nonlinear fashion that, at times, is slightly disorienting in a way that brings you full tilt into the characters’ journeys. The film flashes through David’s past encounters with his sister and the cult that takes her. The scenes between the sibling characters are filled with a sincere chemistry between actors Ross and Miller that deepens the emotional core of the story and amplifies the grief David goes through. Through its supernatural device, HUM is able to burrow into the psyche of David as he wrestles with his grief and the silent specter of his deceased sister. Before long, it becomes clear the odyssey that is thrust upon David is one that will either threaten to consume his soul or offer him absolution from his grief.

As David finds himself trapped within this existential hell brought forth by the mysterious chest, he experiences external conflict by others who are trapped with him. Police officer Powell (Andrew Oliveri) poses a potential threat to the survival of the others while the somewhat secretive Ellie (Sonaz Izadi) offers a vague knowledge of the world they find themselves in. These characters offer a respite to the nonlinear jumps through David’s journey while supplying an immediate intensity to the plot. The thrills inherent to this part of the film are more conventional compared to the cerebral nature of David’s psychological odyssey, which results in a more well-rounded thriller experience.

Filmed in New Harmony, Indiana, HUM boasts a gorgeous natural location as the characters find themselves trapped within the open, wooded environment. While the film flashes to different locations within David’s history, the beauty of the mostly farmland and natural geography of southern Indiana gives the setting in HUM a very lived-in feel. The composition of some of the shots, the use of symmetry, and the way the camera lingers really draw you into the narrative. Marrying that aesthetic appeal with an impeccable sound design that factors heavily into the plot makes HUM succeed on multiple fronts at a technical level.

The underlying conceit of HUM involves the emergence or dead relatives who visit their loved ones but are unable to speak. The film wisely keeps this element of the plot at arm’s length and uses it to build the world around it. Throughout the movie, there are brief audio clips from AM-style radio shows that give HUM a clear picture of the implications, the fear, and the hope that comes from the ghost-like entities. Thereby giving the surrounding small town in the movie a depth and character without diverting attention away from the main character’s journey.

HUM wraps this effective and efficient world-building around an intriguing premise that draws on some of the intrigue and existential cues of other genre works like Lost or Charlie McDowell’s The Discovery. However, HUM carries an impressive amount of subtlety to its storytelling that helps set it apart. The end result is a film that paints a complete picture of grief, loss, and regret in a lot of unique and unexpected ways. HUM is a visceral experience that will leave the audience with a lot to think about on both the mystery and existential levels.