Ishiro Honda’s Rodan certainly lacks some of the character and subtext from some of his other Kaiju films. But that’s not to say it is a bad film by any means. The rise of the pterodactyl-esque creatures and giant insects to wreak havoc on the citizens of Japan make for an engaging monster movie with some surprising (or not so surprising, given Honda’s pedigree) imagery. With each act of Rodan offering nearly its own movie premise, this creature feature is one that offers plenty of action, if nothing else.

The first section of Rodan offers a mysterious crime procedural as miners are brutally killed while working underground. While it’s obvious to anyone watching that this is the work of subterranean prehistoric beasts, the script works wonders to present a convincing logical alternative for the people investigating the crimes to follow. By showing us a rift between two workers, the natural assumption is that the one who goes missing is responsible for the death of the brutalized corpse that’s recovered. This red herring for the investigators also causes a dramatic arc for characters close to the accused and makes for a solid plot thread leading to the discovery of the insect creatures.

The insects are Meganurons, or the larvae of a long extinct dragonfly species. They are massive and grotesque. When they are revealed to the audience (and horrified characters), it comes as a surprise and catapults the movie out of its mystery procedure act and into the monster hunt act. This transition happens effortlessly as the brutality of the Meganuron is on display. The larvae attacks humans and dispatches them with violent (though mostly obscured by low lighting) precision. This shift into a tone of more escalating tension keeps Rodan moving at a brisk pace.

When the titular monster is revealed, however, the film slows down slightly. It circles back to another procedural act wherein scientists debate and analyze what the cause could be for Rodan’s awakening. They reach a likely conclusion that is frankly a bit tired in the wake of Godzilla just two years before. It’s slightly disappointing considering the film references “the theory of global warming” earlier but doesn’t use it as a launching point for the explanation.

Despite that detour, once the action involving Rodan kicks off, the film gets swiftly back on track. Honda’s depictions of the utter chaos of monsters demolishing cities in all of his movies are a sight to behold. In the case of Rodan, there is a good amount of detail added to the spectacle this time around. One shot in particular not only shows the destruction of a building, but adds the effect of shingles being ripped off of it by Rodan’s flapping. This attention to detail shows the care that goes into the models and effects.

While the subtext and themes in Rodan are not as engaging or pronounced as they were in Godzilla (1954), the film still manages a poignant ending. One of the last shots of the film is simply breathtaking. Utilizing color and light from the sun and an erupting volcano, Rodan leaves us awestruck with the beauty and tragedy of its titular character. 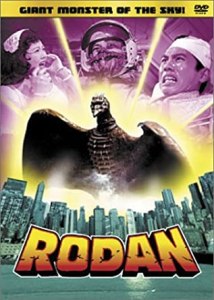