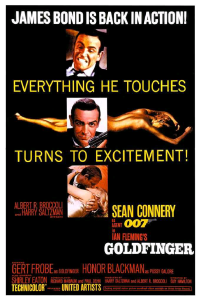 Agent 007 investigates the villainous Goldfinger and his evil plot to take over Fort Knox, or so it seems. Along the way, Bond meets the doomed Masterson sisters and mercurial pilot Pussy Galore. He also goes up against evil henchman Oddjob and his deadly hat.

Of the four non-Craig movies I’ve supposedly seen before, Goldfinger was the one I remembered the clearest. That’s not surprising since it’s a great movie and very memorable. It has the golden “skin suffocation” scene, a theme song that’s still stuck in my head, the first use of a laser in a movie, the brilliantly absurd henchman Oddjob, the very popular Pussy Galore and the unforgettable first appearance of the gadget-laden Aston Martin DB5.

Goldfinger is a bigger movie than the first two Bond movies. It’s flashier, sillier and has more at stake. I liked it a lot. Oddjob alone makes this the best of the first three Bond movies for me. Quite simply, a hulking henchman whose weapon of choice is a hat really speaks to my desire for absurdity in this spy franchise. The moment on the golf course when Goldfinger orders Oddjob to decapitate the statue, I was 100% on board. I honestly don’t see how the franchise could top such a memorable henchman.

Pussy Galore also stands out in the movie, obviously. As far as Bond girls go, I like her a little more than From Russia With Love’s Tatiana Romanova. But I still have Ursula Andress’ Honey Ryder from Dr. No on a bit of a pedestal.

The climax of the movie, involving a nuke at Ft. Knox, is a lot of fun. The highlight was Bond’s showdown with Oddjob that culminated in the best way possible for the henchman to be defeated.

Something that struck me about the movie (and the franchise as a whole) was the continuity. There is no reference to SPECTRE or Blofeld in the movie, but there’s a quick line of dialogue where Bond references Jamaica (and the events of Dr. No) to Felix Leiter. For some reason, I had always been under the impression that each Bond movie was a stand-alone adventure with a steady stream of unconnected villains. I’m pleased that’s not the case. 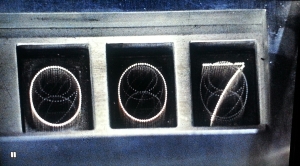 MI6 Commentary – Two commentary tracks are on the disc.  One is by director Guy Hamilton. The other is by members of the Cast and Crew

Sean Connery From the Set of Goldfinger (3mins 12secs) – A short video featuring Sean Connery while he was filming the movie.

On Tour With the Aston Martin DB5 (11mins 43secs) – This is a fun and cool look at the famous car from the movie. There are a lot of interesting tidbits and footage of the car being used in premieres and publicity photos.

Honor Blackman Open-Ended Interview (3mins 53secs) – A short video of Honor Blackman answering questions about making the movie. The questions were designed so different news organizations could edit them to make it appear as if they interviewed her.

The Goldfinger Phenomenon (29mins 14secs) – A look at the memorable moments and making of the film. 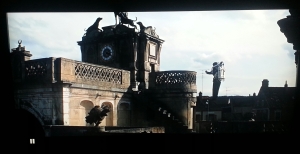 James Bond travels to the Bahamas after SPECTRE holds the world hostage with a pair of atomic bombs.

I took a long break between Goldfinger and Thunderball. Part of the reason for the break was a lack of free time. The other reason was that I enjoyed Goldfinger so much I felt it would be unfair to this one if I watched it with Goldfinger stuck in my head. Once I saw the opening scene of Thunderball, however, my fears were quelled.

Thunderball opens with Bond fighting a man who dressed as a woman after faking his/her death. The sequence closes with 007 flying away with a jetpack. From the very beginning I was hooked.

Terence Young returned to direct what had to be the most difficult Bond movie to film up to that point. Given the tropical setting, the movie puts an emphasis on underwater sequences and set pieces. 25% of the movie takes place underwater. That doesn’t equate to a lack of action. There’s plenty of underwater action taking place. The result is a very fun Bond movie and it’s actually quite impressive.

The movie was the biggest influence on the Austin Powers movies; so anytime something particularly ridiculous (shark feeding, henchman trap door) happened it made me laugh. The action is top notch as well. Sean Connery is great, of course, and the set pieces are as intense and well executed as ever. The climax involving two factions fighting underwater was equal parts hilarious, thrilling and inspired. I loved it.

MI6 Commentary – Commentary by editor Peter Hunt, screenwriter John Hopkins and some of the crew.

The Incredible World of James Bond – Original 1965 NBC Television Special (50mins, 54secs) – A thorough special from 1965 detailing the franchise up to Thunderball.

A Child’s Guide to Blowing Up a Motor Car – 1965 Ford Promotional Film (17mins, 9secs) – A cute tongue-in-cheek promotional video produced by Ford that features a man showing a kid around the set of Thunderball.

On Location with Ken Adam (13mins, 6secs) – Production designer Ken Adam talks about the various locations the movie was filmed in.

Bill Suitor: The Rocket Man Movies (3mins, 54secs) – A behind the scenes look at the jetpack used in the opening scene of the movie. This actually has some pretty interesting trivia in it.

The Making of Thunderball (27mins, 34secs) – This is an in-depth look at the franchise’s history up to Thunderball.

The Thunderball Phenomenon (31mins, 4secs) – Another behind the scenes look at Fleming’s work and the making of Thunderball.

The Secret History of Thunderball (3mins, 56secs) – This is a pretty interesting, brief look at different versions of scenes that appear in the film.

Ministry of Propaganda – Theatrical Archive, TV Broadcasts & Radio Communication – A thorough collection of all the promotional material for Thunderball.

I’m actually not sure if I liked Thunderball more than Goldfinger or not. Goldfinger had Oddjob and Pussy Galore. Thunderball has more standalone cheese. A henchman is fed to sharks and a SPECTRE agent’s seat shoots him before disposing of the body via a trap door under the seat at the SPECTRE conference room.

For its clear influence on Mike Myers’ Austin Powers movies alone, however, I think I’ll give the edge to Thunderball. Both are great entries in the franchise, though.

You can buy the Bond 50th Anniversary blu-ray collection here.