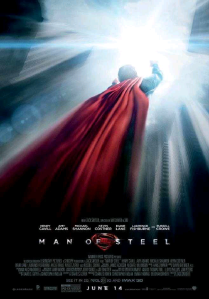 We’re only a few weeks away from the release of Man of Steel. I can’t imagine the pressure Zack Snyder and company are feeling. For the most part, I think knowing that Christopher Nolan is serving as producer after completing his Dark Knight trilogy has washed the bad taste of Bryan Singer‘s Superman Returns out of many Superman fans’ mouths. But there are still a lot of variables at play with Snyder’s Superman movie.

When it comes to super heroes, I’ve never been much of a fan of Superman. He’s too powerful, too indestructible. His story has never been one to really interest me. In fact, when it was first announced, I really hoped this movie would put Supes in a 1920’s Metropolis with a dark noir story, maybe with gangsters. Judging from the trailers, though, it looks like Man of Steel will be a better fit.

I’m back and forth with my expectations for the movie. I really liked what Zack Snyder did with Watchmen. I was also a big fan of his Dawn of the Dead remake. But when it comes to his other movies, I can take or leave 300. Legend of the Guardians: The Owls of Ga’Hoole and Sucker Punch were never really on my radar. Now that I think about it, I might target Zack Snyder for a director feature next month. Until then, I feel like Man of Steel can go either way in terms of direction.

As far as acting goes, I haven’t seen Henry Cavill in anything and I’ve never been a big fan of Kevin Costner, but the trailers for Man of Steel ease my nerves about their casting. As far as Michael Shannon playing Zod is concerned, I can’t express my excitement for him. His talent in Boardwalk Empire is really incredible, if occasionally underused. Even his work in an over-the-top, ridiculous movie like Premium Rush is fun to watch. I think Michael Shannon will prove to be the difference if Man of Steel doesn’t deliver in other areas.

Leave a Reply to The Obsessive Viewer Cancel reply