Palo Alto, CA is an independent movie about a group of friends on Thanksgiving break during their first year of college. The Netflix plot summary says the characters “find their suburban hometown at once familiar yet drastically changed.” It’s a little disingenuous to what the movie is actually about.

Palo Alto, CA introduces its central characters as they part ways after a night that ended with them evading a security guard in their former high school. Each character soon finds himself on a solo adventures through their suburban community.

The movie boasts a strong cast headed by the four male leads.

Alec (Aaron Ashmore) bonds with Anthony (Ryan Hansen), a security guard at the high school and a member of the frat Alec is pledging. Ryan’s (Justin Mentell) night goes to hell when an angry friend with benefits steals his car and forces him to search with the aid of her grandmother (Eve Brent). Patrick (Ben Savage) is constantly working toward his future until his girlfriend dumps him and he cuts loose at a party with his brother. Finally, Nolan (Johnny Lewis) meets Jamie (Autumn Reeser) at a bus stop and the two spend the night wandering around town getting to know each other.

The movie switches between these intersecting stories as the characters spend their night in very different ways.

By far the movie’s biggest strength is the meet cute between Lewis and Reeser. The two have very strong chemistry and their characters feel the most “real” out of the rest of the cast. Even though the circumstances upon which they meet are a little far fetched and Reeser’s performance toes the line between adorable social awkwardness and borderline Asperger’s, it still proved to be the highlight of the movie.

According to the IMDb trivia page: “The majority of the crew were high school students who took a cinematography class taught by director Brad Leong.” While there are very clear blemishes in the filmmaking, it isn’t terrible for an independent movie. At times the script has some issues but it delivers in the scenes that count. 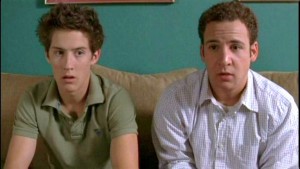 The movie is a bit reminiscent of American Graffiti at times, however it lacks the period charm and, frankly, the talent to be anything more than homage. There were a handful of stand out moments of both comedy and drama that really seal the movie as worth watching.

I deem this movie “Worth a Trip to Red Box” on the Obsessive Viewer Grading Scale. Despite some issues, Palo Alto, CA is entertaining and has some surprisingly sweet moments. It’s worth a trip to the Red Box kiosk. Though you won’t have to trek, seeing as it is available to stream on Netflix.