OBSESSIVE NOTE: In honor of Shocktober here on the blog, I asked my friends and podcast co-hosts to write about their experiences with this sacred tradition. Tiny’s approach was to collect his  thoughts on the movies he watches this month and release them in groups. Here is the first installment of Tiny’s Shocktober Musings.  – Matt (The Obsessive Viewer) “The Collector” […]

OBSESSIVE NOTE: In honor of Shocktober here on the blog, I asked my friends and podcast co-hosts to write about their experiences with this sacred tradition. Tiny’s approach was to collect his  thoughts on the movies he watches this month and release them in groups. Here is the first installment of Tiny’s Shocktober Musings. 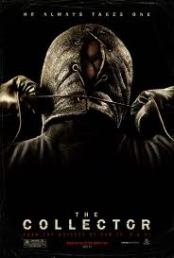 I’m not much of a fan of slasher movies. I appreciate them, and I like the fact that people are so passionate about them, but they just aren’t my cup of tea. The example of The Collector is a pretty solid one, though. It has the added anti-hero hook to it that sets it apart from slasher staples.

This was a really good concept for a slasher movie. Putting an anti-hero in a position to become a true hero is an intriguing idea. The character of Arkin automatically makes the audience feel some sympathy towards him. We kind of lose faith when he decides to rip off the family he was so nice to, and who were subsequently so nice to him. He redeems himself by doing everything in his power to save this family from pure evil. This made the film much more appealing to someone like me. Maybe traditionalists will think its weak, but I certainly enjoyed it.

If you’re a fan of slasher movies, definitely check this one out.

Buy it on Amazon!

Rob Zombie is the new John Carpenter. Yeah, I said it! That’s not to say that they are exactly alike. Carpenter has more of a flair for building tension, while Zombie likes to shock and sicken. What I’m really getting at is can anyone name a more prolific horror director and writer of the last decade? Rob Zombie is the new face of horror flicks, and I think he’ll go down as one of the best.

The Lords of Salem blew. me. away! The movie had a great feel to it. It wasn’t too much of an original idea. Witches try to force a woman to give birth to the son of satan, who will then take over the world. Yeah, we’ve seen it. But Rob Zombie put his own, fresh spin on the formula by setting it in Salem and using the witchcraft folklore of the town to set it apart. Music played a central role in this movie, and what the composer came up with was some intensely disturbing tones. The Slipknot/metal fan in me was giggling with joy at its macabre feel.

This flick is pretty gross. I’ve come to expect nothing less from Rob Zombie. He’s been grossing me out since House of 1,000 Corpses; but he’s done it in such a beautiful way. I think The Lords of Salem is his best work yet, and I can’t wait to see what he does next.

Buy it on Amazon!

I really love the first hour of this film. Michael Myers is a legend of the screen, and with this movie Rob Zombie gave him a genesis. Seeing the young Michael torturing animals, making his first kill and slowly descending into madness in the hospital gave depth to the character that makes him so much more interesting. Some people would argue that they don’t care about that stuff. They just like seeing people get hacked up. I get that. I can’t argue with that. I just feel like there’s always a reason why people get murdered, and this version of Halloween gives us that reason, which the original lacks. It’s just my personal opinion that Rob Zombie’s version of Michael Myers FAR exceeds John Carpenter’s.

Having said that; the second hour isn’t really my thing. It doesn’t scare me at all and it doesn’t particularly intrigue me to watch a guy hack up attractive teenagers for no reason. It doesn’t disgust me either. I just find it repetitive and kind of throw away. However, I think this movie is a prime installment in the canon of the Halloween franchise.

This was my first time watching this movie in well over a decade. I’ve previously stated my lack of interest in slasher movies, so even though Halloween is a classic I always just lumped it in with the rest. That was a mistake on my part. I remembered so little about the plot of this movie. For some reason none of it stuck with me. That won’t be the case anymore. Again, I wasn’t very interested in seeing people getting stabbed and murdered, but the rest of the film is a prime example of masterful filmmaking.

For example, this film used perspective camera angles like no other film before it (and maybe like no film since). What I mean by that is the opening scene where six year-old Michael stalks around the Myers home and stabs his sister to death. The first person camera work had me hanging on every single frame. I really loved it.

Later in the film, after Michael escapes from the asylum, the camera interacts with him differently. The camera sort of looks over his shoulder, and tracks in tandem with his movements. Its almost like the camera can’t comprehend Michael’s worldview, so it has to step back a few paces. Michael following the teens and children around Haddonfield, IL are some of the best shots I’ve ever seen, and are my favorite from the film.  It is so creepy and it feels like we (the audience) are being forced to help Michael complete his tasks.

I’m glad I’m able to appreciate this film now. It still doesn’t fall into any favorite categories for me, but I think it should be in various top 100 greatest films of all time lists. I think that goes without saying.

Comparing it to Rob Zombie’s interpretation, which I was actually more familiar with; I think both films have a lot to offer. I think Carpenter’s is the better film overall, but Zombie’s version will probably be my favorite. Please don’t hate me for saying that. I know it’s blasphemous, but I just appreciate what Rob Zombie did with the character more than the original. Carpenter’s Michael was under-developed and less interesting. You can chalk it up to preference. I prefer my characters with more depth and development, and that’s what Rob Zombie gave us. However, the original has carved out a special place in the dark corner of my heart where my favorite horror films make their home; and there it will forever stay.

OBSESSIVE NOTE: Shocktober on The Obsessive Viewer is all about feedback and reader interaction! We want to hear your thoughts, your opinions and your counter-arguments as we share our Shocktober 2013 experience! Having said that, all hate mail for Tiny can be left in the comments below or directed at his Twitter feed @ObsessiveTiny! You can also hear him on The Obsessive Viewer Podcast.

I contribute to two blogs (obsessivebooknerd.com and obsessiveviewer.com), I host two podcasts (OVpodcast.com and thesecularperspective.com), and I have a boring job that you don't care about.