Here it is (FINALLY), Part VI of my 12-part review of the James Bond 50th Anniversary blu-ray box set. I apologize for the extreme lateness for this entry. I actually watched these movies a while ago and just now got around to writing them up. I just got busy with other things. I’ll do better in the future.

With this entry in the series, I have officially reached the halfway point of my journey through the James Bond franchise. As you’ll see below, this pairing of Moonraker and For Your Eyes Only carried with it both good and bad things. Yet I still enjoyed myself and I hope you enjoy reading my thoughts on them.

Of course, you can read my past Bond 50 posts here. And follow me around the internet with the links below. 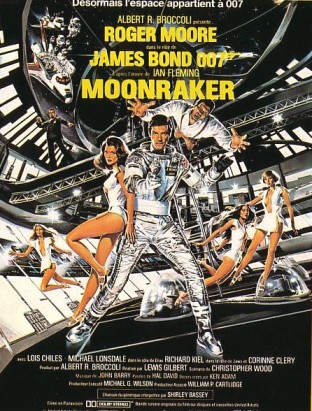 James Bond investigates the theft of a space shuttle and stumbles upon a horrific plot. He also goes up against a familiar foe.

This is the Bond movie I’ve been looking forward to the most. I am a huge fan of space in general and any depiction of space on film is a real treat to me. Seeing James Bond tackle space gives me a ton of joy and did not disappoint. This may actually be my favorite Bond movie yet. Seriously.

The opening sequence is incredible. While it’s probably not my favorite of the ones so far, that really speaks more to the quality thus far and not to any issues with this movie’s sequence. The highlight was seeing Bond steal a bad guy’s parachute in mid-air. I liked seeing henchman Jaws return from The Spy Who Loved Me.

The opening credits line up with the theme music in a notably fitting way. I watched this movie a while after watching The Spy Who Loved Me. The amazing opening sequence and impressive opening credits made me realize how much these movies are becoming a source of comfort for me. I had missed watched Bond and his antics.

The movie looks fantastic on blu-ray. The space sequences in the climax of the film are of particular note; as are the various action sequences. It’s mentioned in the special features that The Spy Who Loved Me was the most successful Bond movie yet. As such, money was poured into the production of Moonraker and it shows in the best ways.

A lot of the movie is pretty tongue-in-cheek but it’s not without intense scenes. There’s a scene in which Bond is put in a centrifuge and nearly killed. As the speed increases, my heart rate elevated. It reminded me of the cremation scene in Diamonds Are Forever in that I had no idea how Bond was going to escape. Intercutting shots of Bond and the centrifuge with flashes of Q giving him the gadget that would save his life was a really nice touch.

Speaking of gadgets, I was floored by the use of the miniature spy camera. It’s become such a cliché of the spy genre that I’ve never seen it honestly employed in anything that wasn’t satire. In fact, the thing I identify it to the most is The Simpsons. So seeing what I assume is the origin of this comedy trope was a really pleasant surprise.

The more Bond movies I see with Roger Moore, the more I love the guy. There’s a moment in this movie where Bond sees Jaws and Moore shines a big toothy smile at the henchman. Pieces of light comedy in these movies are part of what makes Moore such a great Bond for me.

I loved Jaws in this movie, by the way. He undergoes a really interesting character arc that, according to the special features, was in response to a ton of fan mail after The Spy Who Loved Me. It was refreshing seeing a recurring villain in this franchise.

What I loved most about Moonraker (and why it may be my favorite Bond movie yet) was the climax. Moonraker launched Bond into space and I couldn’t be happier. It’s over the top, of course, but when I bought the set, I was looking for ridiculous and cheesy spy movies. This movie delivered that for me while also turning it into a space movie, a genre that I love.

I really like the visuals in the space scenes. There’s something to vintage sci-fi that I just love. I think it’s seeing such dated technology used in situations more advanced than what modern day space travel can muster that I enjoy so much. It’s interesting to see how ambitious our dreams of space were back then.

By the end there’s a full-fledged EVA space battle with laser guns that made me pause the movie and proclaim it as my favorite Bond movie! I regret nothing. The climax of Moonraker delivered multiple layers of satisfaction for me that I simply did not expect from a Bond movie.

007 in Rio – Original 1979 Production Featurette (12mins, 45secs) – It’s really interesting to see these archival featurettes. I really like seeing the grainy behind the scenes footage. Since they were made as promotional material, seeing what aspects of the film they wanted to promote is really cool. This featurette puts an emphasis on filming in Rio.

Circus Footage (1min, 19secs) – Footage of the circus from the end of the opening sequence with narration by Michael Wilson.

Cable Car Alternative Storyboard 2 (2mins, 10secs) – This is a more drastically changed storyboard. It includes a fight with a henchman they didn’t end up using.

Inside Moonraker – An Original Documentary (42mins, 2secs) – An in-depth look at the making of the movie. There’s a really great look at how they handled the special effects in the space scenes. The techniques they used were very clever and impressive.

The Men Behind the Mayhem – Special Effects Documentary (19mins, 1sec) – A look at the people responsible for the special effects in the Bond movies throughout the franchise.

Bond’s attempts to locate and recover a British encryption device are complicated by a woman seeking revenge for the death of her parents.

I wasn’t terribly crazy about this entry in the Bond franchise. The biggest issue I had was the very “80s” soundtrack. It comes down to personal preference but whenever Bond got into a chase or other action-heavy situation, the soundtrack swelled with overproduced 80s music and it grated on my nerves.

That’s not to say it ruined the action sequences. The movie itself is a mixed bag in terms of the set pieces the franchise is most known for. While the production value hasn’t wavered, the situations have become a bit repetitive. There’s a ski chase that is very reminiscent of On Her Majesty’s Secret Service and it even involves a bobsled track. There’s also a gunfight on a beach similar to OHMSS.

Maybe those connections are intentional. It’s certainly possible considering the movie opens with a scene showing Bond at the grave of his dead wife. But that seemed like it was more of a design for the pre-credit sequence considering it had no other bearing on the plot of the movie.

The pre-credit sequence itself was probably my least favorite thing in any of this half of the Bond franchise’s movies. As I understand it, Kevin McClory (who originally worked with Ian Fleming to adapt Thunderball) owned the rights to SPECTRE and the Blofeld character. After a lengthy court case was settled, he kept the rights and the opening of For Your Eyes Only was written to kill off Blofeld and to tell McClory that the success of the franchise didn’t rest on SPECTRE and Blofeld.

There’s more to the behind the scenes legal issues, I’m sure, but the end result is a pre-credit sequence that irked me. Blofeld’s death is too comical and silly. At one point he tries to bargain for his life by saying “I’ll buy you a delicatessen.” It’s silly but it’s not “Bond silly.” It felt vindictive and not in keeping with the tone of the franchise.

I didn’t hate For Your Eyes Only, though. It’s not the best but it’s far from the worst. The plot isn’t terribly engaging but there’s a turn a little over halfway through and that’s when my interest was piqued. The last third of the movie was more to my liking and the set pieces before I, while carrying an annoying soundtrack and a bit repetitive, were still fun to watch.

All in all, For Your Eyes Only is a solid entry in the franchise. 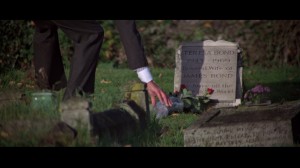 Neptune’s Journey (3mins, 33secs) – Once again narrated by Michael Wilson, this time talks about filming the underwater scenes in the Bahamas.

Inside For Your Eyes Only (29mins, 48secs) – Behind the scenes documentary of the making of the movie with an emphasis on the difficulties and nerves filming stunts and the filmmakers’ attempts to bring the franchise back to reality after Moonraker.

Buy the individual “For Your Eyes Only” blu-ray here.

I watched these movies once and made notes throughout. After taking some time away from the Bond 50 set (and procrastinating on this review) I came back and looked over my notes. When I read them over one thought came over me. I need to watch these movies again.

So I felt the urge to rewatch both movies before the review. I wanted to rewatch Moonraker because I loved it and wanted to experience the joys of seeing Bond in space (I’m sad this movie has a lower IMDb rating than Diamonds Are Forever). When it comes to For Your Eyes Only, I felt like I needed to watch the movie again because the plot wasn’t very engaging and my memory was too hazy to actually write an honest review of it.

So obviously I choose Moonraker as the winner in this match up of the Bond 50 set. I didn’t rewatch it though, sadly. But I did rewatch For Your Eyes Only and found myself liking it more the second time around.

You can buy the Bond 50th Anniversary blu-ray collection here (now including Skyfall!)

I don’t have a rigid schedule for these reviews, so if you want to know when the next one is posted, you can follow me on Twitter @ObsessiveViewer and like the blog on Facebook. You can also check out The Obsessive Viewer Podcastfor weekly episodes about a bevy of TV & Movie related discussions. 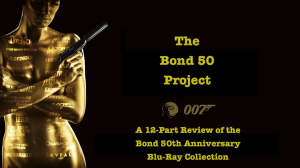