Listen to us discuss our favorite and least favorite movies from 2013 on The Obsessive Viewer Podcast We survived the 2012 end of days! It’s really a miracle that we got to see any movies in 2013, right? Let alone 20 movies ABOUT THE APOCALYPSE! In keeping with the great tradition (check out Matt and Tiny’s posts earlier today), here […] 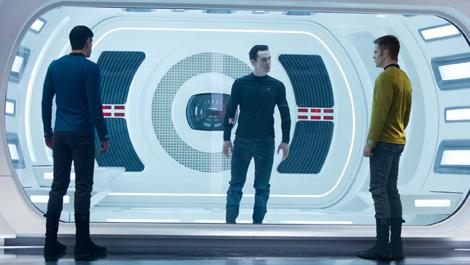 We survived the 2012 end of days! It’s really a miracle that we got to see any movies in 2013, right? Let alone 20 movies ABOUT THE APOCALYPSE!

In keeping with the great tradition (check out Matt and Tiny’s posts earlier today), here are my top ten movies of the year. They aren’t necessarily the BEST movies of the year, and that’s intentional. Best of the year list tend to be similar, and have very few surprises. So while you’ll find a few movies on this list that aren’t surprising at all, I like to think that my list has a combination of consensus with the critics and going against the grain. They might not be the best, but these are my Top Ten Favorite Movies of 2013.

About Time probably wouldn’t be in my top ten if I hadn’t seen it so recently. It’s not the type of movie you remember years after, but for a time it certainly does delight. The real treat is that while the trailer sold the movie as a romance with a time-travel twist, it turned out to be a movie about family. I saw About Time about a month after I got married and its themes hit home in a very timely way. At a time in my life where all I was thinking about what was most important to me (my wife, my parents) About Time shined a spotlight on why those things are important. There’s a scene where the male lead played by Domhnall Gleeson shares a touching moment with his father played by the impossibly great Bill Nighy that wrecked me. This is THE feel good movie on this list!

Really, there was no reason for this movie to NOT be good. Jason Sudeikis is really starting to make a name for himself in movies and Jennifer Aniston is always great. Director Rawson Marshall Thurber also did Dodgeball, which is a recent comedy classic. We’re The Millers had everything going for it and it certainly didn’t disappoint. The movie also had just enough heart to keep it from getting too ridiculous. Plus that scene with Jennifer Aniston…ya know?

The funnier of the two comedies on this list, This is the End was an ab-burner. I honestly don’t know if I’ve laughed out loud as much at a movie in years as I did while watching the End. I saw this movie with a group and our feelings were unanimous. The first movie actually directed by Evan Goldberg and Seth Rogen, This is the End was a brilliant blend of meta comedy and dudes-hanging-out-being -funny. Also, I’ve always liked Channing Tatum, but after this movie I seriously respect the guy.

The only horror movie on this list. It seems the horror genre is always trying to reinvent itself (or copy itself,) and every few years it also decides to make fun of itself. Scream did it best (and most notably,) Behind the Mask did it later, The Cabin in the Woods did it most recently, and You’re Next offered it’s take in 2013. As a horror fan, I really love what these movies do, and they haven’t dropped the ball yet.

Most people might argue that The Conjuring is the better and more original horror movie in 2013, and really, they have an argument, but You’re Next was so damn clever. The movie poked fun at horror AND the upper class, and all of the characters were perfect as archetypes. Joe Swanberg as Drake was particularly hilarious as the oldest of a group of children reunited for their parents’ anniversary. The tension was high, the carnage was impressive and the scares were earned. I can’t wait to revisit this one for Shocktober.

This is probably the most controversial pick on this list. Critically, it was panned for being derivative and pointless. I found it less imitative and more a work of reverence to sci-fi before it. Critics are so quick these days to call a movie out for borrowing elements from the best of its genre that they almost forget why those elements are so popular. They just work! The special effects in Oblivion are spot on, as is Tom Cruise. After surviving the Mayan predicted apocalypse in 2012, more movies than I can count this year decided to be set post-apocalypse. This one was my favorite.

I really thought I would see Prisoners on more end of the year lists. It had probably the most impressive cast on this list. Jake Gyllenhaal, Viola Davis, Melissa Leo, Terrence Howard, and Paul Dano were all fantastic, but Hugh Jackman as a tortured-by-his-own-demons father of a kidnapped daughter is exceptional. The movie was about a lot of things, but Jackman’s Keller Dover and his fall from grace was undoubtedly its greatest feature. The mystery aspect of the movie was almost secondary to Keller’s internal struggle. Prisoners reminded me of the depth of some of my favorite character-driven movies, and over time I wouldn’t be surprised if it found its way onto my all-time list.

Gravity was a marvel to behold. It was an achievement of the silver screen and demonstrated why the decline of movie theaters is a real tragedy. Gravity was an experience unlike any other movie on this list. That said, I worry that it will suffer during home viewings. Sandra Bullock was as fantastic as people have said she was, but the real star of the movie was space, and without a giant screen of stars and darkness surrounding you as you experience disaster alongside Bullock’s Dr. Ryan Stone, I don’t think the movie will be as awe-inspiring.

Enough of my complaining though, the movie was exciting! Its tight narrative was gripping, and I think an upgrade over director Alfonso Cuaron‘s critically acclaimed Children of Men. George Clooney was impressive in what little screen time he had, but his added bit of humor was a welcome contrast to the gravity (sorry, had to) of the situation his character Matt Kowalski and Dr. Stone were in.

In a year full of truly fantastic movies, 12 Years a Slave is the closest thing to a frontrunner for the Oscar Race, and deservedly so. It is, as everyone else has said, the best depiction of the true horrors of slavery. Chiwetel Ejiofor as Solomon Northup, a free man kidnapped and sold into slavery, was near perfect in a star making turn. Anyone who watches an actor work and says “I can do that” should watch Ejiofor in 12 Years a Slave. He provided a clinic on subtly running the gambit of emotions. Michael Fassbender, too, is fantastic as evil slave-owner Edwin Epps.

A single paragraph really isn’t enough to truly cover the importance of 12 Years a Slave. It’s not an enjoyable experience to watch, and I might never watch it again, but damned if it wasn’t one of the best pieces of film I saw all year.

Fruitvale Station was another movie that wasn’t particularly fun to watch. At only 85 minutes, it’s much tighter than 12 Years a Slave, which might be why I’m ranking it slightly higher. Much has been said about the authenticity of the purportedly true story of Oscar Grant III’s last day. A popular article was written shortly after the movie about how Fruitvale is “loose with the facts in an effort to elicit sympathy for Oscar Grant.” While that might be true, I think the movie does a good job at showing the unsavory aspects of Oscar’s personality. The scenes between Michael B. Jordan (also in a star-making turn) as Oscar and Octavia Spencer as his mother show both of these sides.

In particular, Oscar throws a tantrum of sorts during a prison visit from his mother. I loved this scene. It was cringeworthy, and showed that Oscar was real. Even if some of the aspects of his life were exaggerated, the movie was entertaining and well made. Even more, it shouldn’t be ignored that what happened to Oscar Grant isn’t an isolated incident. There are several instances similar to his that don’t need to be exaggerated. 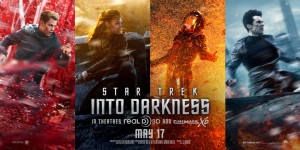 Picking only ten movies to make this list was difficult, but picking a favorite was not. I saw Star Trek Into Darkness three times in theaters and found something new to appreciate every time. Of my top three movies, it might not be the most impressive story, but it was without a doubt the most entertaining piece of film I watched all year. Trek purists almost unanimously hated Into Darkness for it’s pseudo-sequel-remake approach, but I loved it! I wrote a piece defending the movie from these critics here, so I’ll stay away from it here. Instead I’ll focus on what I loved.

You can’t not pay attention when Chris Pine is doing work. He’s just so much fun to look at, and as Capt. James T. Kirk, he’s enthralling. Zachary Quinto is just as good as Spock, and I thought the building of the relationship between the two friends was an enhancement over 2009’s Star Trek. Benedict Cumberbatch was particularly fun to watch, even in his slightly hammy reveal that he is Kahn. I’m not a fan of anything Star Trek before the 2009 remake, but the nods to classic Trek lore were appreciated even by me. Into Darkness is a movie that was as entertaining as science fiction can get, and it’s no surprise that it is my favorite movie of 2013.

The Way, Way Back

While I watched more movies in theaters than any year before, this was easily my least impressive total movie year on record. I’m proud of my theater viewings, and I’m going to shoot for 70 in 2014. I’d like to have my total viewings back up to 200 for next year.