Skip to content
The Month in Movies: February 2014
Uncategorized

The Month in Movies: February 2014

Total Viewings: 13 First Viewings: 5 Theater Viewings: 2 Money Spent on Movies/TV: $86.13 Click here for a chronological list of the movies I watched in February. So I’m incredibly late with this post and I really do apologize. I’ve been busy with a lot of things the last few weeks. But don’t worry. You’re finally about to read my […] 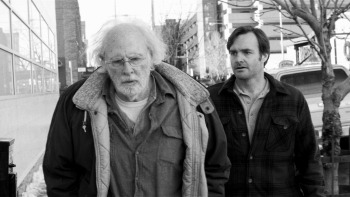 So I’m incredibly late with this post and I really do apologize. I’ve been busy with a lot of things the last few weeks. But don’t worry. You’re finally about to read my breakdown of my February movie watching habits for 2014.

February was a slow month. So slow, in fact, I was forced to leave my Dishonorable Mention pick for this month blank! Otherwise I would have had to list Dallas Buyers Club. Even though I wasn’t much of a fan of it, I really don’t think it deserves to be mentioned alongside The Croods when talking about the worst movies I watched during the month.

Having said that, let’s get to it, shall we?

The Month in Movies

I talked about Nebraska on the podcast, but for those who didn’t hear me gush about it, I loved it. This movie spoke to me on a number of levels both as a movie fan and as a person. I have some personal reasons for attaching myself to some of the characters and some of the situations, but of course my opinion isn’t solely formed from that personal resonance.

Nebraska is a beautifully made film about a man, his family and his son. Shot in black and white, we see the graying world that surrounds the aging, alcoholic Woody (played by Bruce Dern) as he and his son embark on a journey to Nebraska.

This isn’t a road trip movie, though. The pair get stuck in Woody’s hometown and thats when things really got interesting for me. Woody’s son David (played impeccably by Will Forte) learns a lot about his parents and where they came from. This is where the movie shines.

I respected Nebraska for its sharp characterization and even more so for its brutally honest portrayal of small town life that goes against traditional Hollywood standards.

I wrote a review of The Lego Movie here on the site. I was pretty critical of it’s script from the storytelling perspective, but the movie earned the Honorable Mention slot by being watched in a slow month and being hilarious.

I was gung-ho about watching the Best Animated feature nominees for the Oscars, but The Croods just about instantly killed that desire. I was pretty bored throughout the movie. The father’s overbearing nature in the name of protecting his family was interesting enough in the beginning, but it wore thin pretty quickly.

The script was reliant on cheap puns and ultimately unfunny observations that played up the family’s ignorance of the world. Some of the jokes felt like copy/paste jobs from a studio exec’s “script doctoring” recycle bin. When the father, while hunting, refers to the animal as “fast food” early in the movie, it lost me.

As noted above, I’m leaving this blank. I guess I could put Saved! here. But I liked the movie well enough. Don’t worry, guys. March has been a better month.

As I said, this movie was hilarious. I don’t know what exactly I was expecting when I walked into The Lego Movie, but what I got was a pretty fun viewing experience. Will Arnett as Batman was hilarious and the heartfelt stuff at the end of the movie reeled me in.

I’ve talked through a lot of my issues with Dallas Buyers Club and I’ve decided I probably just need to see it again. Maybe I was distracted during my first viewing or not in the right frame of mind. It’s possible. But regardless, I left that viewing feeling like the movie just didn’t live up to the hype surrounding it.

Even though Jared Leto did give a really amazing performance, I was left wanting more with the character. He existed as a catalyst for Matthew McConaughey‘s development, but I would have liked to have more about the character. There was a scene with his dad and that’s about all of the non-McConaughey development we got.

As for McConaughey’s character’s development, eh. It was a great performance (not as great as Chiwetel Ejiofor’s though). But, again, the character development just wasn’t there for me. He made the jump from bigot to supporter a little too quickly for my taste.

But again, it’s possible I’ll have a different opinion whenever I see it again with fresh eyes. For now, this movie was a letdown.

I don’t know when the last time I watched Airplane! was, but it’s been several years. This movie is magnificent. This was one of those fabled movie-viewing experiences where I was remembering certain jokes and lines but I was experiencing them as if it were my first viewing. Part of that is because my memory is hazy and I couldn’t quite remember the scenes. The other is because I was watching it as an adult for the first time. I loved every second of it.

Mike talked about a similar experience he had while watching E.T. on one of our recent podcast episodes.

I’m three weeks late with this but that wraps up my movie roundup for February. As I mentioned above, March is shaping up to be a respectable month of movie watching. I’ll have my roundup posted in a couple weeks.