Review/Rant: God’s Not Dead – The Most Offensive Movie I’ve Ever Seen

Update 1 – 4/17/14: Click here to listen to my friend and I discuss the movie on The Secular Perspective Podcast! Update 2 – 4/23/14: Listen to The Obsessive Viewer Podcast’s take on “Religion in Movies” by clicking here. One of the best things about movies is their ability to create conversation amongst an audience of strangers. Movies that specifically tackle deep philosophical issues […]

One of the best things about movies is their ability to create conversation amongst an audience of strangers. Movies that specifically tackle deep philosophical issues should inspire debate and conversation. I went into God’s Not Dead with the hope that it would have at least a frame of something, anything at all thought provoking. After all, this is a movie that at its core is about one of humanity’s most polarizing debates.

Unfortunately, God’s Not Dead amounts to an over the top piece of religious propaganda that will only appeal to people sucked into its message before they bought their ticket. In the process of actively avoiding subtext while delivering its propaganda, God’s Not Dead managed to become the most offensive movie I’ve ever seen.

The movie focuses on Josh (played by Shane Harper), a college freshman who finds himself at odds with his philosophy professor, Mr. Radisson (played by Kevin Sorbo). Radisson is an atheist who insists that all of his students refute the existence of God on the first day of class. 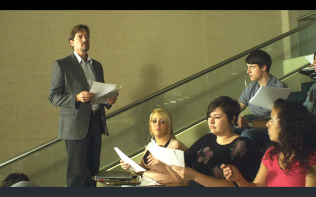 This is not an abstract experiment to demonstrate an idea or principle for sake of a philosophy lecture. It’s an exercise meant solely to feed Radisson’s ego. He’s depicted as arrogant and close-minded, forcing his worldview on students under the threat of poor grades. I would point out the irony of this happening in a class that’s subject is about the discussion of human ideas, but that would honestly be giving screenwriters Chuck Konzelman and Cary Solomon far too much credit.

After refusing to forsake his beliefs, Josh is assigned to “prove God exists” to the class. He’s given three opportunities to present his argument to the class in a mock trial format. These scenes are laughable as the presentations really only serve to beat the audience over the head with the hate-filled cruelty of Mr. Radisson.

As the movie progresses, Radisson devolves into an antagonist of cartoon super villain proportions. He’s overly arrogant and disrespectful of anyone’s views that clash with his own. He comes just short of outright assaulting Josh in the hallway as he threatens to destroy the kid’s academic future if he keeps humiliating him.

Radisson’s cruelty is played to the extreme as he ridicules and verbally abuses his Christian girlfriend; a woman the screenwriters are only too eager to show is his former student. Because the audience didn’t have enough reason to dislike the character, I guess we need to be beat over the head with shaky morals and misconduct to really lock on to how morally void this character is.

Mr. Radisson’s girlfriend/former student Mina faces a moral dilemma as she comes to terms with her boyfriend’s aggressive anti-religious rhetoric. To the movie’s credit, this plot line is the only one in the movie that comes close to the mark it sets out to hit. But still, the professor is so over the top and ridiculous that it’s hard to believe anyone would want to be anywhere near him in the first place.

The movie only gets more egregiously one-sided from there. Some of the supporting characters include an atheist blogger who’s diagnosed with cancer (it’s implied her lack of faith caused it). Then there’s her extraordinarily arrogant money-driven boyfriend (played by Dean Cain). His response to hearing that his girlfriend has cancer is cold and ruthless. “Couldn’t this wait for another day?”

Perhaps more disgustingly narrow-minded than the idea of atheists being all but pure evil in this movie, is the subplot involving a young Muslim student. She’s forced to keep her Christian faith a secret from her overbearing, intolerant and abusive father. The clear implication here is that the only other faith represented in the movie is inferior to Christianity.

Rounding out the supporting roles and providing some comic relief is Reverend Dave and his missionary friend who suffer divine setbacks as they attempt to drive to Disney World. The obvious contrast the movie draws between these supremely friendly and helpful characters and the cavalcade of hateful non-believers severely undermines the message presented.

All in all, this movie just isn’t worth seeing. The script is atrocious with unintentionally funny dialogue sprinkled throughout melodramatic situations that would put the likes of any Lifetime Original Movie to shame.

So why do I find it so offensive?

God’s Not Dead was produced by Pure Flix, a production company described by their website as “a Christian movie studio that produces, distributes, and acquires Christ centered movies for the sole purpose of influencing our culture for Christ.” So obviously it would have been foolish to go into the movie with hopes or expectations of any kind of objectivity.

If you’re a listener of The Obsessive Viewer Podcast, you’ll know I contribute to my cohost Tiny’s side-project The Secular Perspective and that I identify myself as an atheist. Though, I suppose “agnostic atheist” would be more accurate. I don’t personally believe a religious God exists but I recognize that the existence (or lack thereof) of any deity cannot currently be proven or disproven with 100% certainty. 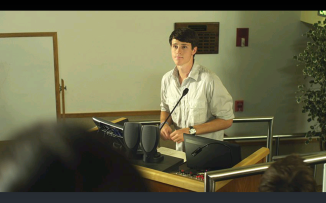 It became very clear early in the movie that I’m not the target demographic. Pure Flix produced a movie that’s (rather unintelligently) designed to reaffirm the faith (and gain the money) of the devoutly Christian audience. That alone isn’t that bad of a thing. There are plenty of movies I don’t watch because I don’t fit the demo. God’s Not Dead, however, presents one side of the argument in a propaganda piece that shows the other side of the debate as nothing but villainous caricatures.

I sat in the theater insulted and appalled that I contributed to this movie’s box office earnings. What offended me the most was the depiction of the atheists in the movie. None of the non-believers I know in my life are anything like those featured in the movie.

The mere fact that the two sides of the argument are depicted in such a black and white, good and evil fashion closes the door to any kind of meaningful debate the movie could have otherwise presented. And it leaves me feeling insulted.

The movie makes the vast and sweeping assumption that non-believers turn to atheism because they hate God or resent God based on negative personal experiences. This is an incredibly ignorant assertion that proves there’s a massive shortcoming in the movie’s screenwriting.

At the end of the movie Mr. Radisson is hit by a car and attended to by Reverend Dave and his missionary friend. The scene is laughably bad as Radisson lies on his back in the street and the missionary instantly knows that the man’s ribs are crushed and his lungs are filling with fluid.

What offends me on a deep, personal level is that Reverend Dave immediately asks Radisson if he’s saved. Knowing absolutely nothing about the man he’s watching die, Dave’s first priority is to ask if the guy is saved. Screw making him comfortable or trying to keep him calm, Dave’s going to take it upon himself to witness to this dying stranger. Radisson spends the last moments of his life being preached to and asked to accept Jesus as his Savior.

Of course, being that this movie is religious propaganda, Radisson accepts Jesus. Granted, Radisson came to that realization a few scenes earlier, but the shots of him pleading for salvation and spiritual guidance is insulting to people who embrace secularism. It’s actually damaging to the supposed main purpose of the movie as well.

Does Pure Flix’s really think the best way to achieve their goal of “influencing our culture for Christ” is to create a movie depicting atheists as morally corrupt, despicable and vindictive people? The movie literally tells the audience to text everyone they know with the message “God’s Not Dead.” So why spend the entire movie attacking and insulting the group they apparently intend to “save?”

Yes, the movie does in fact end with a black screen with words telling the audience to text everyone they know with the message “God’s Not Dead.” Aside from the fact that a lot of annoyed people across the country are now at risk from getting annoying group messages and group replies, this irritates me more than anything else in the movie.

In the third act, Radisson asserts that religion is a disease. Josh explains that it’s not a disease, yet the movie ends with a plea that the audience spread the movie’s message in a fashion not unlike the spread of a communicable illness.

Reverend Dave and the missionary standing over Radisson’s dead body only amplified the sheer ridiculousness of the movie’s final moments. They smile, happy with the “great thing that happened” there. That’s an actual line that Dave says as he’s standing over the lifeless body of a complete stranger. Even more egregious is that they take the dead man’s cell phone so they can look in glee at the “God’s Not Dead” text message he’ll never be able to read. 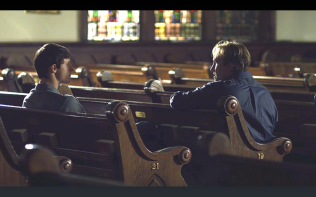 My point here is that I just don’t understand why this has to be a thing. In many ways, the movie is asking its religious audience to behave the way its hate-filled antagonist behaves. Radisson aggressively pushes his agenda and worldview on his students. So the movie ends telling its audience to do the same.

I don’t know a single atheist who would push his or her atheism on a person. I don’t know why this movie is hell-bent on presenting a blatantly inaccurate view of a personal philosophy except as a means to present their view in as “strong” a light as possible. It’s cheap and dishonest.

God’s Not Dead is clearly not meant to inspire conversation or debate. It exists as a vessel for religious people to spread their message among themselves and others while egregiously misrepresenting opponents of their worldview. In a lot of ways it does a lot more harm to its message than it does good.

Being that this is a movie review, however, my rating is based on the merits of filmmaking. Unfortunately for God’s Not Dead and the movie-going public, the makers of this movie sacrificed story and competent direction in favor of a ham-fisted message that will only be heard by people who go into the movie with the faith that this movie so forcefully shoves down the audience’s throat.

I was so offended by this movie and the fact that I paid to see it, that it compelled me to make a $20.00 donation to the American Association for the Advancement of Science. You can donate at the link below.

If you’d like to hear more about my friends’ and my secular perspective on the world, you can check out The Secular Perspective podcast here.