Last Sunday night, The Walking Dead concluded its fourth season with a finale that was a marked improvement over last season’s lackluster conclusion and overall better than some of the dull episodes we were subjected to throughout the season.

The Walking Dead is a show that above all else is about inconsistencies in the quality of the writing. For me, every great episode comes at the price of two or three dull, disjointed episodes. Sunday’s finale, simply titled “A”, was something of a marriage between the disjointed and the stellar writing techniques of the series.

The finale felt a bit off in its first half. The decision to focus on Rick, Carl and Michonne was necessary for the suspense at Terminus, but it also made the finale seem less like a finale and more like another episode from the back half of the season. It was engaging storytelling and led to a satisfyingly eerie final scene, but it felt more at home in an episode earlier in the season.

The highlight of the episode was the altercation with Daryl’s new friends by the car. The camerawork really helped accentuate the brutality and borderline insanity of Rick’s behavior. Rick biting the guy’s throat and killing him is one of my favorite things the show has done in a while. The scene after that between Rick and Daryl provided the perfect amount of heart and drama needed to come down off the adrenaline rush before it.

I haven’t read all of the comics. I’m actually in the process of reading them and will review all of them on ObsessiveBookNerd.com. So keep an eye out for those reviews to start posting next month. So I don’t know specifics about Terminus, but I do have a gripe about the way it was unveiled to us. 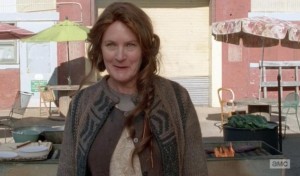 Was it glaringly obvious to anyone else who hasn’t read the comics that these people are cannibals? When Maggie and the gang arrived at Terminus at the end of the penultimate episode, the way the woman offered them a plate just took away all the mystery from the closing minutes of the finale. It was clear there was something up but the emphasis on the food was a bit too much.

The show gave away too much information without putting enough emphasis on the right thing. I didn’t realize the woman was wearing Beth’s sweater until I discussed it with a friend afterward. That is as much a fault on my viewing prowess as it is on the writers’ parts. They planted that seed in an episode that fought for my attention. If they had sustained an engaging subplot with Beth and Daryl, I would have been more inclined to remember they clothing.

None of this is to say that the end of “A” wasn’t suspenseful, though. From the moment Rick started noticing his friends’ clothes, I was extremely nervous. The moments leading up to them getting in the train car were great. In fact, throughout most of this season I’ve been bothered by the thought that the show hasn’t felt like a “horror” show in a long time. For a while it’s felt more like a “drama with zombies.”

However, watching Rick and his friends passing a pile of meatless human remains and wandering through a creepy candlelit room with ominous warnings was a great example of the tone I wish the show would use more.

As Rick and his group were corralled into the train car and reunited with Maggie and the others, one thought hit me. Unless Beth’s sweater came from the prison, they didn’t have the warning signs that Rick had in this episode. The grim look the other group gave Rick’s makes me wonder if they ate the human meat. As morbid as it sounds, I really hope that’s the case. The psychological implications of it would make for some seriously intense drama next season. I wonder if they’ll go that route.

As a whole, I liked season 4 more than season 3. The flu outbreak at the prison that carried the first half of the season was a great break from the rut the show has found itself in at various times throughout its run. The second half of the season was engaging, for the most part. With the exception of Daryl and Beth’s search for booze, I was satisfied with the disbanded group’s adventures.

My friend and podcast cohost Mike gave up on The Walking Dead sometime in the second or third season. His go-to snarky remark about the show is that it’s “the best zombie show on TV.” That’s why I continue watching it as it ebbs and flows through creative difficulties and behind the scenes shake-ups. It’s because I love zombies and there’s no alternative on television. 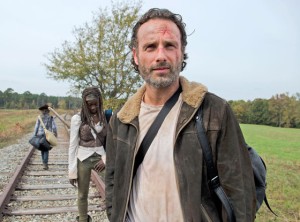 “A” wasn’t a disappointing finale. It was the conclusion of a season of a show I watch out of love for the zombie horror subgenre. As such I’ll continue to watch it until a better alternative comes along. I don’t know what the writers have in store for next season, but I’m hoping for 8 episodes in Terminus and the back 8 being the trip to D.C.

CHECK OUT MY EPISODE REVIEWS OF House of Cards, BATES MOTEL AND UNDER THE DOME.