I would love to call baseball my favorite sport, if I were a sports enthusiast. Being that I’m an obsessive viewer of movies and TV, though, I don’t have the time to become a sports fan. It’s all well and good because I can live vicariously through one of my favorite genres of movies: the sports movie. Now that Spring […]

I would love to call baseball my favorite sport, if I were a sports enthusiast. Being that I’m an obsessive viewer of movies and TV, though, I don’t have the time to become a sports fan. It’s all well and good because I can live vicariously through one of my favorite genres of movies: the sports movie. Now that Spring has finally sprung (well, in theory; it’s snowing right now), I’ve made my yearly pledge that I’ll go to an Indianapolis Indians game, I decided to watch 42.

As far as I know, 42 is the only mainstream movie offering a biographical account of Jackie Robinson. It’s a bit of a shame because I can’t help but think the man’s life and experiences in baseball could have been depicted better.

Chadwick Boseman is great as Robinson, but aside from the racial slurs hurled at him, the man doesn’t have much to work with or play off of in the movie. 42 pigeonholes itself be being an account of Robinson’s first year in the MLB. As a result, we don’t get any background on the character or any insight into his life or, for that matter, his personality. The entire movie is based around his reactions to the vitriol he faces.

Not helping matters is Harrison Ford in his portrayal of Branch Rickey. While 42 gives more insight into Rickey as a character than it does to Robinson, it’s somewhat marred by Ford’s nearly over the top portrayal of him. I really do hate to stick that to Harrison Ford because it really is one of the more inspired performances I’ve seen from him. Unfortunately, there are times in the movie where he comes across as slightly hammy and it hurt the end product.

As a whole, 42 reminded me a bit of Remember the Titans in its depiction of the racial tensions of the era. Like Remember the Titans, 42 takes a very “Hollywood” approach to the racism of the time it’s depicting. There are several scenes where Robinson encounters racial slurs (and outright threats) that play more like the movie is reminding us of the horror of racism rather than showing us how Robinson handled it.

The best scene in the movie is also a window into perhaps the script’s biggest issue. Alan Tudyk appears as Phillies manager Ben Chapman and steals the movie. During a game, Chapman stands in the Phillies dugout leveling a horrific barrage of racial epithets at Robinson. In this scene both Tudyk and Boseman shine as the former shows an honest side of gleeful hate while the latter wordlessly shows Robinson’s rising temper.

The scene culminates in Boseman’s best and most emotional performance in the movie. Unfortunately, that’s the heart of what I felt was wrong with the movie. Chapman is the physical embodiment of the racism that Robinson faced, but he isn’t necessarily the “antagonist” of the story. Instead of focusing on this bit of history and expanding upon their altercation as a larger allegory for the racism of the time, 42 takes on the grander, general issue of racism as an antagonist. 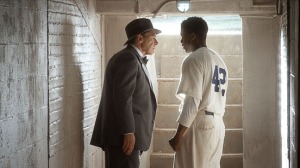 The story follows a chronological account of his first season as a Dodger and tries to manufacture an antagonist in the third act in the form of Pirates pitcher Fritz Ostermueller. It’s a depiction that has caused outcry from Ostermueller’s relatives, who say the man was misrepresented for the sake of storytelling. This backlash echoes some of the criticisms Cinderella Man faced in its depiction of boxer Max Baer.

The movie suffers from these issues but overall it’s not a bad movie. A little dry and dull at times, 42 is a reasonably capable but unfocused look at an important part of baseball’s history. Unfortunately it’s a story that deserves more than a Hollywood-ized interpretation, which is what 42 ends up being at the end of the day.