You can read my review of every Bates Motel episode here! Before I get to my (late again) review, I want to mention that Bates Motel was officially renewed by A&E for a third season. As with the first two seasons, I’ll probably review each episode. For now, let’s get to this week’s review. SPOILERS AHEAD This week in White […]

You can read my review of every Bates Motel episode here!

Before I get to my (late again) review, I want to mention that Bates Motel was officially renewed by A&E for a third season. As with the first two seasons, I’ll probably review each episode. For now, let’s get to this week’s review.

This week in White Pine Bay, the most mismatched pair of couples on the planet goes for a swim. Dylan found out how the shady underworld of the town repays heroism. Norma got a new job and Cody’s dad took a tumble.

Let’s start at the beginning, though. Norma catching on that Norman’s been drinking with Cody put the mother and son relationship under a spotlight for the episode. Norma using it as an excuse to try to prevent Norman from getting his license was more about wanting to prolong his adolescence than punishing him for bad behavior. It shows how lonely Norma is and how that loneliness can manifest itself into something selfish.

Speaking of Norma, her questioning Ford about Lee Berman’s death was a little hard to read. I couldn’t tell if she was legitimately that naive about how Ford operates or if she was playing dumb. It says something about the overall naivete of the character, I think. In any case, when she pieced it together, she severed ties with Ford.

Norma’s naivete, however, was back in full force a few scenes later when her new friend Christine very sweetly (and completely without an agenda, I’m sure) suggested that Norma takes Berman’s spot on the council. I have to hand it to Christine and George, as painfully obvious as Nick Ford was with his handling of Norma, they are much more subtle. They’re obviously up to something here, right? I can’t bring myself to figure out what the deal is with them.

Elsewhere this week, Dylan demonstrated to us that the beauty of having a 10 episode season is that it means your characters get to fully heal from getting hit by a car in a manner of days….or hours. I’m not sure how much time passed between episodes. All I know is that Dylan was looking pretty healthy.

I had some ideas about what Dylan’s boss was up to that didn’t pan out. At least, they didn’t pan out this week. I was really hoping that the show was setting it up for Dylan to be some kind of prisoner. It’s possible that they still are doing that, I suppose, but the scene where she essentially makes him the secret assistant to the regional manager kind of blows that theory out of the water. I’m not fully convinced she is who she says she is. 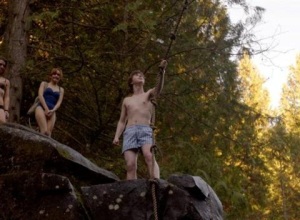 Speaking of water, that sweet segue brings me to one of the more peculiar double dates on television. Norman and Cody’s latest adventure blowing off their play responsibilities was interrupted by Emma and the weed guy (his name’s Gunner, apparently) looking for their own romantic getaway.

The scene really illustrated how mismatched these couples are. Later, when Emma nearly drowns, the scene shifts into an intense one with Norman yelling at Gunner and Cody. I’m not sure how the show wants the audience to feel about the prospect of Norman and Emma together. They are far better matched than their current love interests, but in the back of my mind I keep coming back to the very real truth that this is Norman Bates. We know where his story is leading. Even still I should point out that Freddie Highmore played Norman’s anger really well. 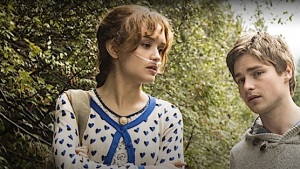 The scene between Norman and Emma later in the basement was a great window into Norman’s inner workings. It seems that he’s become a little more self-aware about his inner demons. The way he asked Emma repeatedly if he overreacted was his way of trying to rationalize his outbursts and growing homicidal tendencies. It was a strong scene and it makes me wonder if Norman’s split personality will be something he consciously embraces before he loses his mind to it.

There was a nice bit of comic relief in the form of Romero telling Norma that he can see through the curtains in her room at night. Even when it’s a little creepy, I love when these two characters have scenes together. Incidentally, tv eyes are another strange pairing, considering Romero knows all the illicit details about the town and Norma is still very much in the dark.

It’s a matter of time before something happens between Norma and Romero. The two have strong chemistry and their close proximity now makes them more likely to hook up. Unless George gets in the way of that, which is a likely scenario. By the way, Norman’s odd jealous of George really shows that the weirdest thing about Norma and Norman’s relationship is the bizarre jealousy and triangles it invites.

The episode ended with Norma finding out about Norman’s recent blackouts and then using that to deprive him of his license. The scene really made me feel bad for Norman and almost made me question my “lonely, selfish” Norma assessment from earlier in the episode. I stand by it though, because she seemed more eager about him not driving than she seemed concerned about his health. Now Norman has to wait three years for his license. That genuinely bummed me out for the guy.

Norman left his dear mother by the side of the road and walked to Cody’s. That’s when the he inadvertently killed her dad. I’m really eager to see where this thread leads. It was an accidental death, but I’m sure it’ll illuminate Norman’s more peculiar behavior.

We’re 6 episodes into the season. I’m liking it fine enough. The first season had such a rigid narrative structure that it’s kind of hard to adjust to the more refined character-driven storytelling implemented in season two. It’s good, but this time last season we had an intense gun battle between Dylan and the Deputy plus the truth about Norman’s dad. I feel like the first episode of the second half of season two deserved something just as substantial. Here’s hoping Caleb will come back and stir stuff up again.

You can get the episode on Amazon and iTunes.