This was my first time watching last year’s The Wolverine. I was pleasantly surprised to see that it was directed by James Mangold. He directed one of my favorite westerns, 2007’s remake of 3:10 to Yuma. With that in mind and knowing this was a Wolverine movie without the word “Origins” in the title, I went in with some pretty high hopes.

For the most part, I was not let down. The opening scene depicting Logan saving a man from the bombing of Nagasaki was amazing. The visuals showed the destruction and horror of the bomb with enough strength to set the tone and establish the relationship between Logan and Yashida (Hal Yamanouchi), the man he saves. This was an important piece of backstory that carried the narrative through the movie’s first two acts.

What works most in The Wolverine is that it substitutes the plethora of comic book favorites and shoddy filmmaking of X-Men Origins with a straightforward plot and an intense character study of Logan. The movie follows The Last Stand but isn’t reliant on the continuity. There are vague references to it but The Wolverine smartly gives its titular protagonist a more personal arc.

Throughout the movie’s first act, Logan has visions of Jean as he lives a life of monk-like solitude. These visions are more a reflection of his struggle with who he is by nature rather than pining after his lost love. This works very much in the movie’s favor since the love story between Jean and Logan was never the franchise’s strong suit.

There’s a darkness that surrounds the first act of the movie as the Wolverine within Logan lays dormant. It’s a tone unlike any the franchise has seen and it makes it clear that this movie is a personal journey for Logan first and foremost and a comic book movie second. That’s how it’s set up in the first act, at least. However, soon the man he saved long ago in Nagasaki drags Logan to Japan.

From there, the movie drags a bit. Yashida, now a very wealthy man on his deathbed, offers Logan the opportunity to die by transferring his healing ability to the dying man. When the two men speak, it sets up a strong moral dilemma that ultimately gets tossed by the wayside when Logan suddenly and mysteriously can’t heal. I couldn’t help feeling that the movie would have been a lot better if Logan’s inability to heal was by his own choice rather than a sudden plot development.

There is a reason for the absence of his ability. The explanation however, is dissatisfying as it ushers the movie out of the dark, personal tone established in the first half and brings it into more standard comic book movie fare. The comic aspects are handled well enough, but after 5 movies, I was happy to catch a break from the norm.

That’s not to say there aren’t some great action set pieces, though. In fact, there is a sequence on top of a bullet train that absolutely floored me. The filmmaking of the bullet train scene is awe-inspiring as it keeps a very tight perspective on the high speed without sacrificing intensity or relying on cheap filmmaking tricks like slow motion. It is without question the highlight of the movie and one of my new favorite moments of the franchise.

Of course, that leaves a bit to be desired out of the climax of the movie. The action in the last act is good and, at times rather intense. The tone of the final act is marred slightly by a villain that is at best formidable and at worst over the top to near Bond-like proportions. Throughout the movie, the villain is given hokey, explanatory dialogue that is way too on the nose and distracting.

Still, its villain doesn’t wholly damage the movie. There are some great non-Wolverine bits of action. There’s a scene heavy with impressive swordplay as well as a foot chase with some impressive parkour elements worked in. The unrated version really ups the violence that Wolverine is capable of and the coarse language suits Jackman‘s performance very well.

This installment of the franchise makes some interesting leaps in telling the story of Logan. The movie shows him in a vulnerable light that is new and even a bit unsettling after being so used to him being indestructible. Ultimately, the lack of a compelling villain and a muddled second act keep this from being a contender for the best of the franchise. It was still leaps and bounds above X-Men Origins: Wolverine and, for that, I’m happy to own the blu-ray. 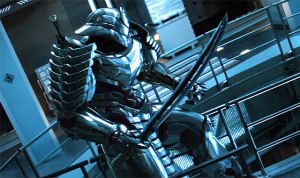 Speaking of the blu-ray, I want to get on a quick soapbox for just a moment. The Wolverine, like many blu-rays and DVDs today, comes with the standard “Piracy is not a victimless crime” PSA screen before the movie. It also has a nice placard at the end of the credits telling the viewer that the movie created jobs for 1500 hard working people.

I respect the industry’s push to try to curb piracy. I really do. The problem I have with this is that the unrated version of The Wolverine is only available on the 3D blu-ray release and not on the standard blu-ray disc. The 3D blu-ray costs substantially more than the standard theatrical cut blu-ray and I can only assume that releasing the movie like this drove more people to pirate it than releasing the unrated version in all formats would have.