Apes Franchise Review: Part II – Beneath the Planet of the Apes (1970) 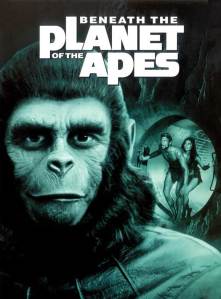 1970’s Beneath the Planet of the Apes picks up where its predecessor left off, with Taylor (Charlton Heston) and Nova (Linda Harrison) on horseback making their legendary discovery on the beach. From there, we meet Brent (James Franciscus), another crashed astronaut searching for Taylor. After Taylor mysteriously disappears, Brent finds Nova and embarks on a journey Beneath the Planet of the Apes.

As you may have read yesterday, I loved the original Planet of the Apes. So I went into Beneath with a bit of an open mind and slightly lowered expectations. It’s extremely difficult to create a sequel that is as worthy of the acclaim of the original while being original in and of itself. Beneath the Planet of the Apes is no exception to that rule, sadly, as it makes some peculiar choices along its slightly slow paced narrative.

I wouldn’t call Beneath a bad movie, though. There is actually plenty of good in this sequel. James Franciscus, for example, takes the torch from Heston and carries the movie well. His performance is strong enough to not disappoint or detract from the experience, although, the character of Brent doesn’t really have much depth. Brent is essentially Taylor without the character development that Taylor got in the first act of the original movie. In fact, according to the trivia page on IMDb, Franciscus was cast because of his resemblance to Heston.

Kim Hunter and Maurice Evans reprise their roles as Zira and Dr. Zaius, respectively. Although Zira is reduced to only a few scenes and Dr. Zaius’ prominence is also somewhat lowered in this installment. It’s nice to see these characters again, but they are ultimately pushed aside for the sake of expanding the franchise’s mythology.

Expanding the mythology is a big part of what lies beneath the Planet of the Apes. We’re introduced to a bevy of new human characters that provide and intriguing view into the backstory of how the planet became the Planet of the Apes. At times I felt like some of the more science fiction aspects of these characters were a bit much. They toed the line between weak sci-fi and outright silliness; even in a franchise about a world run by apes.

Religion plays a big part in Beneath, but it’s not the focal point of movie’s social commentary. There’s a strong anti-war and nuclear weapons message in the movie, but it falls a bit short of the impeccable subtext of its predecessor. This can probably be blamed on the movie’s pacing, which begins quick and satisfactory early before hitting a speed bump around the halfway point.

The second half of the movie meanders to an expected climax. On the whole, the story is resolved well. The movie ends in a satisfying manner except for a very irritating narrative choice. There’s a sense of unnecessary finality as the movie ends that’s delivered in a highly random and jarring way. It felt strange and unneeded.

All told, Beneath the Planet of the Apes is a good enough sequel to a sci-fi classic. It has elements of what made the original movie great, but in the name of expanding the franchise’s mythology, they fall somewhat by the wayside. There are some strange choices in the second half and ending of the movie but it’s still an enjoyable, though poorly paced, journey for the characters and audience alike.

This movie may not be worthy of your home collection, but it’s worth the effort it takes to travel to your nearest Red Box kiosk.