Apes Franchise Review: Part III – Escape from the Planet of the Apes (1971)

In preparation for Dawn of the Planet of the Apes‘ release next week, I decided to review every movie in the Apes franchise thus far, having never seen a Planet of the Apes movie before. You can find an index of my Apes reviews here and check out The Obsessive Viewer Podcast here. Now, here’s my review of the 3rd movie in the […]

1971’s entry in the Apes franchise is a peculiar one. Escape from the Planet of the Apes begins with modern day humans recovering a spaceship only to find Zira, Cornelius and a 3rd ape (Milo) aboard. The movie follows the apes’ experience in 20th Century Los Angeles and the human reaction to the discovery of them. 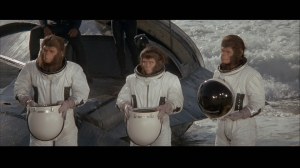 Obviously, Escape is a vastly different movie in tone and overall execution when compared to its two predecessors. It presents a reversal from the dynamic of the first movie that doesn’t work nearly as well. This doesn’t feel like a Planet of the Apes movie and the near total lack of suspense throughout the first two acts does real damage to the pace of the movie.

The story is interesting in and of itself, but interesting doesn’t necessarily equate to entertaining. I like seeing Kim Hunter and Roddy McDowall return for this movie. They have great chemistry and, despite the script’s flaws, their comedic timing is on point. Hunter in particular brings a ton of charm to the role of Zira but that charm is a bit wasted on a lackluster script.

The plot doesn’t kick into high gear until the movie is almost over. Previous to that turn of the plot, there are some interesting scenes between the apes and the humans but I can’t help but feel like the first two acts should have been condensed into the first 20 minutes.

In fact, I think there could have been a much better movie in Escape from the Planet of the Apes than what we were given. If the movie had taken itself more seriously and made the apes’ journey about trying to prevent the events of the second movie, it could have been more compelling and far more serious. Instead, the suspense kicks in so far into the movie that it’s hard to reexamine your interest without feeling like the plot is an afterthought.

Compared to the rest of the movie, and despite the awkward pacing, Escape ends well enough. It’s missing a lot of the things that interested me in the first two movies. If there’s a social commentary in the subtext, I couldn’t find it. Maybe there’s a statement about euthanasia and maybe abortion, but I know that’s a big stretch to make about a movie that makes a literal monkey suit sight gag.

At the end of the day, Escape from the Planet of the Apes is misstep for me in the franchise. It represents missed opportunity and a negligent lack of suspense. The movie is saved somewhat by Kim Hunter and Roddy McDowall’s charming chemistry on the screen. Unfortunately, the movie is just too much of a departure from the first two and left me wanting a lot more.

Here’s to hoping the franchise redeems itself.

You won’t regret watching this, but there’s a chance it’ll get buried in your Instant Queue.