Apes Franchise Review: Part IV – Conquest of the Planet of the Apes (1972)

In preparation for Dawn of the Planet of the Apes‘ release this Friday, I decided to review every movie in the Apes franchise thus far, having never seen a Planet of the Apes movie before. You can find an index of my Apes reviews here and check out The Obsessive Viewer Podcast here. Now, here’s my review of the 4th movie in the […]

Set in the distant future of 1991, 1972’s Conquest of the Planet of the Apes tells the story of Caesar (Roddy McDowall), the grown spawn of Cornelius and Zira from Escape from the Planet of the Apes. Living under the care of Armando (Ricardo Montalban, reprising his role from Escape), Caesar finds himself in a city for the first time. He’s horrified to see that apes have become servants of mankind. What happens next is a chain of events that sets the stage for the destinies of man and apes to collide in violence. 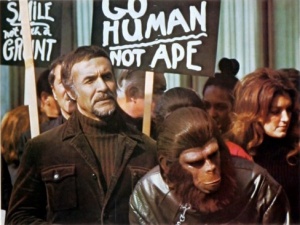 I’m finding more and more that I enjoy one of the overarching themes of this franchise. Namely, you can argue that the Apes movies are a testament to how compassion can lead to your downfall, to an extent. Each movie includes a character that’s sympathetic to the protagonist’s struggles. More often than not, however, the compassion of one person doesn’t always protect the protagonist or prevent doom.

Conquest of the Planet of the Apes builds off of Escape’s conclusion and improves upon the previous movies various shortcomings. There is conflict present from the opening scene and the movie is paced well from there. There are also strong allegorical connections to slavery and oppression that I really appreciated.

Roddy McDowall eclipses his previous performances in the franchise. Caesar is a stronger character than Cornelius was and Kim Hunter isn’t around to drive focus from McDowall. The result is a fantastic display of pain, disdain and inner horror as Caesar sees and comprehends the terrible things happening to his own kind. McDowall (and the movie itself) truly shines when Caesar decides take action.

Ricardo Montalban benefits from an increase in screen time over the previous movie. In Escape, he was introduced far too late in the movie to make any real impact. Here, Armando is a key part of the story and that gives Montalban much more to work with. Once Caesar and Armando become separated, the two arcs work in tandem to give the movie a very brisk pace.

When watching the rest of the humans in Conquest I not only gained more appreciation for the storytelling of the franchise, my feelings toward Escape softened a little. When viewed as a piece of exposition for Conquest, Escape from the Planet of the Apes actually works well at setting the tone for this movie. In this movie, the humans are the antagonists but their actions (for the most part) are out of self-preservation. It’s a very intriguing dichotomy that I hope gets carried through to Battle.

As far as fourth entries in a franchise are concerned, Conquest of the Planet of the Apes is a very strong one. Its story builds well upon what has been established thus far and does so in a meaningful and emotional way. It also includes the franchise’s best performance since Heston in the original in Roddy McDowall’s portrayal of Caesar.

I hope the trend continues to rise with Battle for the Planet of the Apes.

These are titles worth adding to your physical collection at a discounted price.