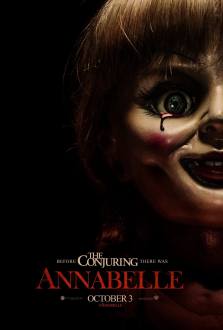 Annabelle tells the backstory of the Annabelle doll, however, it isn’t a “factual” account nor does it purport itself to be. Whether you believe in the supernatural things that the Warrens made a name for themselves chasing or not, the story of Annabelle begins with a woman giving the doll to her daughter. The movie, however, depicts a young married couple’s ordeal with the doll a year earlier and is entirely fictional.

Mia (Annabelle Wallis) is a pregnant woman married to John (Ward Horton), who’s on track to become a doctor. Shortly after John gives Mia a present (the Annabelle doll), they are the victims of a violent attack from satanic cultists. The doll gets possessed and then scary stuff starts happening to the couple.

I liked the inclusion of satanic cults in this movie. There’s a scene that lays the groundwork for the attack where Mia watches a news report on the Manson Family and it works well to establish an eerie tone that would have set it apart from The Conjuring. Unfortunately, the cult is just a plot device to facilitate the haunting and give the doll’s possession an origin story. From there, the movie goes through the motions of a standard haunting movie.

The haunting events in the movie are broken up by different character actions and relocations. Mia has the baby, John becomes a doctor and the new family moves to a new apartment. All these things disrupt the flow of tension in Annabelle. After the cult attack, Mia is ordered to bed rest for the rest of her pregnancy. After she has the baby, it was surprisingly hard for me to disregard the movie’s “rule” that Mia was incapacitated. It’s not that I wasn’t paying attention; it was due to the fact that the movie puts an emphasis on the doctor’s orders, as if the movie’s timeline will play out throughout the end of her pregnancy, and then it’s obviously dropped with the baby’s birth.

Annabelle is an exercise in poor pacing and lacks simple sources of conflict like marital disagreements and doubt. Mia experiences the hauntings and John rationally talks her down from the extreme notion that they’re being haunted. When the evidence stacks up, Dr. McPerfectHusband doesn’t really seem to bat an eye.

The absence of personal conflict between the couple isn’t the worst thing about Annabelle, though. The feeling of “been there, done that” is felt throughout the entire movie. The scenes in which the demon haunts Mia are pretty run of the mill for this type of movie. In the movie, things move on their own, appliances turn on, and the images of demons and a cult member appear whenever you expect them. The script doesn’t properly set up these things and because of that, the effect is mostly lost.

Alfre Woodard plays Evelyn, an “ominous for the sake of ominous” bookstore owner who befriends Mia. The movie gives Evelyn a stronger backstory than Mia and John, but makes the movie’s climax blatantly obvious in the process. Tony Amendola plays Father Perez, a source of strength and explanation that’s ultimately completely useless for the family.

If you read my review of The Conjuring, you’ll know I enjoyed it a lot for James Wan‘s directing and the tone he struck in paying homage to classic horror. Unfortunately Annabelle feels like a rush job that has forsaken tone and genuine frights for a cookie cutter horror movie that will leave you unsatisfied.

Thankfully, James Wan is returning to direct The Conjuring 2. So we have that to look forward to in 2016. 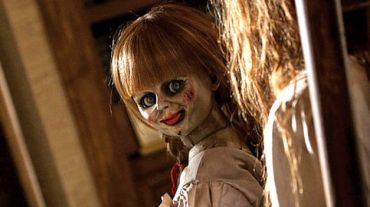 You won’t regret watching this, but there’s a chance it’ll get buried in your Instant Queue.