In “Men, Women & Children”, director Jason Reitman navigates the waters of human relationships and delivers a poignant and witty film about how we conduct ourselves in “private.” The movie […]

In “Men, Women & Children”, director Jason Reitman navigates the waters of human relationships and delivers a poignant and witty film about how we conduct ourselves in “private.” The movie takes the perspective of several teenagers and their parents who all intersect here and there in a Texas town. The movie was adapted from the novel of the same name by Chuck Kultgen.

I’ll be upfront with you; I adored this movie. Even though it’s kind of early, I have no problem throwing “Men, Women & Children” into the ring as a contender for the Best Adapted Screenplay Oscar nomination. This is a movie that sits with you after you watch it and leaves you to consider the current state (and future) of human interaction.

That, in its simplest form, is why I loved this movie. It leaves a strong impression on you without treating you like an idiot. The movie doesn’t take up a position or present itself as an Earth-shattering cautionary tale about the dangers of texting. Instead, Reitman simply shows us how humans interact and leaves it mostly to us to dictate the moral implications of the story.

That’s not to say character arcs in “Men, Women & Children” don’t conclude strongly. They all do. From Jennifer Garner as an over-protective mother to Judy Greer as a woman transplanting her dreams onto her teenage daughter and all the teenagers and dysfunctional adults in between, the movie deals out comeuppances and reality checks very well.

This movie is filled with strong performances that complement the stellar script written by Reitman and Erin Cressida Wilson. The aforementioned Jennifer Garner and Judy Greer take what could have been the two most over-the-top characters of the movie and bring humanity to their roles.

Patricia (Jennifer Garner) is an extreme example of helicopter parenting but Garner performs with a certain believability. She plays the role of the abusively restrictive parent with such genuine concern (however misguided), that it makes her almost sympathetic. There’s no real explanation of why she is so protective of her daughter, but it doesn’t really take anything away from the movie.

On the other side of the coin, Donna (Judy Greer) is the disturbingly open parent who, on the surface, is willingly exposing her daughter to online predators with scantily clad modeling pictures. It’s disturbing and would have been easy for the movie to use the character of Donna as a soapbox for the dangers of the Internet. But the character is written and performed with a sincere naiveté that demonstrates how easy it could be to lose perspective and fall into a horrible rabbit hole dug with good intentions.

The other adults in the movie have their share of hardships and emotional disconnections. Adam Sandler and Rosemarie DeWitt play Don and Helen Truby, a married couple who, having lost their sexual zest, seek out extramarital affairs. Here Sandler proves he’s more than capable of handling a role that isn’t centered on dick and fart jokes. His performance is calm and introspective in a way that never gets boring. DeWitt handles the complexities of an undesired housewife with self-esteem issues very well. Their scenes (together and apart) give the movie’s ensemble structure a very strong foundation.

Dean Norris rounds out the adult characters as the recently divorced, emotionally awkward father Kent Mooney. He and his son Tim (Ansel Elgort) become emotionally disconnected when Tim’s mother leaves town with another man and Tim decides to quit the high school football team. Kent and Tim embark on distant but similar paths of grief and discovery of their respective identities. Norris is great as a man slowly learning how to be a single parent.

Much like Jennifer Garner, Ansel Elgort takes charge of his performance. Tim could have easily been an over-the-top archetype of the existential teenager who spouts off “YouTube Philosophy” at random moments. To an extent, Elgort is still that character in this movie. But the character is written and performed with a strong emphasis on why he is going through this existential crisis that it makes him the linchpin for the movie’s emotional core.

Tim’s new relationship with Brandy (Kaitlyn Dever), Patricia’s closely monitored daughter, gives “Men, Women & Children” something of an antithesis to the movie’s broader themes of technology’s hold on human interaction and relationships. The two young actors have strong chemistry and really excel in scenes where they share their emotionally vulnerable sides.

Finally, there’s Allison (Elena Kampouris). She’s a teenager dealing with body image issues and eating disorders. The way her arc unfolds throughout the movie is arguably the most dramatic of all other characters. Throughout the movie, Allison attempts to win the affection of Brandon Lender (Will Peltz) and, in doing so, exposes the audience to a raw, emotional depiction of teenage naiveté and angst. It’s depressing, but important to the movie’s bigger picture.

“Men, Women & Children” is a very witty and honest look at how technology is affecting human relationships and behavior. The script seamlessly weaves poignant and affecting drama with awkwardness and terrific comedic timing. Reitman’s direction is in top form as he translates the impersonal experience of online interaction to the visual platform of film. This is a movie that will leave you with a lot to consider about how we share ourselves and what we choose to share with others. 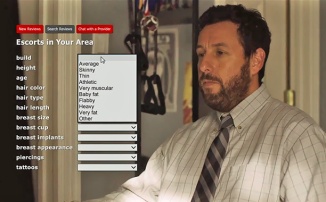 A movie fan is only as good as his or her movie collection. Titles that earn this grade are worth adding to your collection sight unseen and at full price.