Christopher Nolan has a knack for taking a genre and creating something unique and fresh out of it. Batman Begins offered an intense and gritty comic book origin story. The Dark Knight was a crime thriller set in the Batman universe. Inception was a heist movie in a sci-fi dream world. And Memento was a noir revenge movie that put the […] 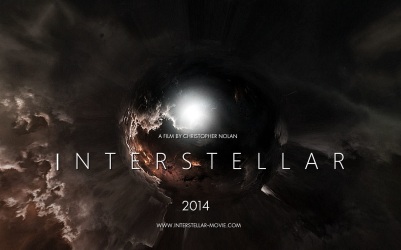 Christopher Nolan has a knack for taking a genre and creating something unique and fresh out of it. Batman Begins offered an intense and gritty comic book origin story. The Dark Knight was a crime thriller set in the Batman universe. Inception was a heist movie in a sci-fi dream world. And Memento was a noir revenge movie that put the audience into the damaged perspective of its protagonist. Now with Interstellar, Nolan has set his sights on conquering space.

Interstellar stars Matthew McConaughey as Cooper, a widowed farmer and former astronaut raising his two kids in a future where the planet’s resources are rapidly depleting, resulting in something like the Dust Bowl but on a global scale. When Coop stumbles upon what’s left of the country’s space program, he reluctantly accepts the job of piloting a mission into deep space that could save humanity.

While Interstellar is Nolan’s most ambitious and expansive movie to date, it unfortunately doesn’t set itself apart from other movies in its genre like Nolan’s past work has done so well. I wouldn’t outright call Interstellar derivative per se, but I could easily point out a handful of scenes, situations and concepts that were a little too reminiscent of notable space movies and, frankly, worked better in those movies than they do here.

In particular, one turn late in the movie felt like it was done out of obligation to the genre rather than being necessary to the plot. It made the movie feel bloated and made me question whether the subplot as a whole should have been in the movie at all. I’ll qualify that by saying the script and overall plotting are tight enough that there’s a storytelling purpose for this plot development, but it felt abrupt nonetheless. It was as if it either needed more time to unravel or be cut from the movie entirely in favor of a more concise circumstance that would lead down the same narrative path.

When the movie was announced, it was reported that Nolan was implementing his own ideas into the script his brother Jonathan Nolan wrote when Spielberg was attached to direct. You can clearly see what Christopher Nolan incorporated into the script. Several elements of the movie feel like revisiting Nolan’s past work. Many of them can be reduced to commonality in his storytelling and basic narrative structure, but they are still far from unique to Interstellar.

Things like the older mentor dispensing wisdom, plot and perspective (Michael Caine in any Nolan movie, including this one) and a couple elements from The Dark Knight Rises that would go into spoiler territory, are excusable. But at its core, Interstellar is a story about a widowed father desperate to see his kids again, which is exactly what one could say about Inception. I’ve long celebrated Nolan’s storytelling prowess. The similarities here to his past movies are forgivable and nitpicking at best, but they’re worth mentioning because Interstellar is the first time in his career where I felt like Nolan was struggling to tell his story.

A lot of time is spent setting up the horrid conditions people on Earth live under and the complacency that comes with it, which is fine. But then the movie jumps right to the space travel with barely enough time to set up the crew, save for Anne Hathaway‘s character. The crew of the mission isn’t the focal point of the movie, though. The two joining Coop and Hathaway’s Amelia become ancillary characters as Interstellar explores human connections and exploration against a backdrop of complex scientific theories.

The emotional crux of the story is the relationship between Coop and his daughter Murph, whose anger at her father for leaving propels her onto her own emotional journey. That’s perfectly okay for the movie Nolan made. However, I couldn’t connect to it as much as the movie needed me to because my attention was divided by scenes of the mission that felt a little flat. This was due to lacking development of the crew, an unnecessary rush to get the mission underway and the plot’s general adjacency to space movie tropes.

It also felt to me like Nolan waited too long in the movie to reintroduce Murph’s storyline to the plot. The result is a shift in the narrative that carries through the rest of the movie. New characters and dynamics are introduced on Earth while the mission storyline pushes forward. I accept that it’s probably the only way Nolan could have told the story without filling his space movie with too many scenes playing out on Earth. But this made the movie feel clunky and disengaging at times.

None of this is to say this movie is stale or even bad, for that matter. This is a really good movie. The sound mixing coupled with the 70mm IMAX picture created an auditory experience in key sequences that I could feel in my bones, despite occasionally overtaking some dialogue.

The visual effects are breathtaking and, as far as I can tell, scientifically accurate. There’s a haunting lack of sound in exterior shots of the ship and stars only populate the sky in scenes where they would be visible and not drowned by the light of a nearby star. However, the visual effects live in the shadow of Alfonso Cuarón‘s Gravity, a movie that left me awestruck throughout its runtime with visuals superior to anything Nolan accomplishes here.

The script, as I said earlier, is crowded but makes narrative sense as a whole piece. The story between Coop and Murph is very strong in and of itself with an emotional resonance that isn’t totally lost on me. McConaughey carries the movie well, playing off impressive imagery, keying into a range of emotions for dramatic scenes and tapping into affable comedy in moments involving artificial intelligence. Anne Hathaway‘s performance gives the movie a different layer of human yearning than McConaughey’s and supplements it with a sense of scientific wonder. Michael Caine, Casey Affleck and Jessica Chastain are great in their supporting roles.

Some of the problems with the movie lie in characters like Wes Bentley‘s Doyle and David Gyasi‘s Romillly (who make up the rest of Coop’s crew). They aren’t given much development and remain mostly a mystery to me throughout the movie. Worse, though, is Topher Grace‘s character, who’s introduced late in the movie and contributes nothing of value besides being Murph’s support in another subplot that felt more at home on the cutting room floor.

As a fan of all of composer Hans Zimmer‘s collaborations with Nolan, I can confidently say Interstellar is the best score I’ve heard from him. The movie’s main theme, which was used in the teaser trailer a year ago, recurs throughout the movie in key moments. The first use of it, in a scene with Coop and his kids, helped establish the underlying themes of wonder and yearning to reach higher that Coop and Murph share while providing poignancy to the world the movie was creating. It sent chills down my spine. 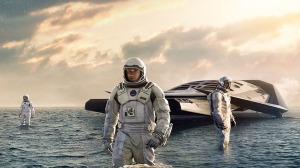 I went into this movie with a love of Nolan’s work and the space movie genre. What I wanted was a more existential space movie than what Nolan delivered; something more in line with the imagery and themes hinted at in that original teaser trailer. Unfortunately, Interstellar doesn’t have much to say about humanity or our place in the universe. Instead, Nolan tells a story about a father and his daughter that gets diluted by a few narrative detours and either conscious homages or subconscious wanderings into space movie tropes.

As a whole, this feels like a “Christopher Nolan movie.” Interstellar is unlike anything Nolan has ever made; yet it feels like a lot of the stuff he’s made in the last decade. The filmmaking strokes and flairs that made our hearts race in the Dark Knight Trilogy and Inception play more like director trademarks here, included to remind audiences whose movie they’re watching.

Interstellar, while technically impressive, utilizes science in a way that’s thought provoking but ultimately becomes a victim of too much familiarity in a work that has a little too much going on.