Last year I reviewed Lone Survivor and found it to be an offensively jingoistic piece of American military propaganda that disrespected most of the people who lost their lives in the real life incident the movie depicted. As such, my expectations going into American Sniper really weren’t that high. I also made a conscious effort not to research Chris Kyle or any of the reviews or word of mouth about the movie.

For those unfamiliar with the plot of American Sniper, the movie is about Chris Kyle (Bradley Cooper), a Navy SEAL sniper credited with more than 160 confirmed kills. The movie, directed by Clint Eastwood, depicts Kyle’s four tours in Iraq as well as his relationship with his wife (Sienna Miller) and the effects of war on his life stateside. 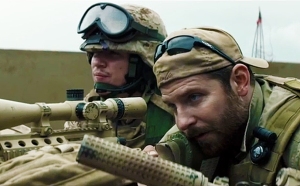 American Sniper isn’t as offensively jingoistic as Lone Survivor. But it also, unfortunately, isn’t anything to write home about. The emotional through-line of American Sniper is the toll the war takes on Kyle’s psyche and how it affects his relationships. However, these moments are few and far between in a movie that is very poorly paced and lacks follow-through in its examination of its subject.

The movie begins with a condensed look at Kyle’s upbringing and how it molded him into being a “sheepdog.” This sequence is essential to the story Eastwood is telling but the brevity of it left me wanting. The movie gives us cliff notes on his childhood and, despite the sequence’s importance to the narrative, it felt poorly executed and established a pace that didn’t fit with the rest of the movie.

Once Kyle enlists and the relationship with his wife Taya (Sienna Miller) is established, the movie shifts its focus to the combat. In fact, given that Kyle spent four tours in Iraq, a majority of the movie depicts the hell he endured. The war sequences are shot well enough, but save for the final one, they are largely indistinctive when compared to the breadth of modern war movies depicting this particular region of conflict.

However, I exclude the final sequence from that analysis for good reason. It helps the movie reach a level of intensity that ties back to the emotional story of Kyle and his wife in a particularly poignant way. Before the conflict there’s an impressive aerial shot that brings the audience into the sequence while making me wonder where Eastwood was hiding that flair and talent throughout the rest of the movie.

That one impressive sequence stands alone, however, in a movie that strains its focus on a few different things at once. Eastwood creates a balancing act, spreading American Sniper into part biopic, part war movie, and part post-traumatic stress disorder awareness piece. He threads the narrative through these filters and the result is a movie that lacks focus.

American Sniper failed to connect with me on nearly all fronts except for the scenes involving PTSD. There are several moments where Kyle is stateside between tours and encounters PTSD. Yet these moments, despite carrying the most emotional resonance, fail the rest of the movie by being infrequent and oftentimes dropped.

In one scene Kyle runs into his brother (Keir O’Donnell), who is visibly shaken by what he’s experienced in the war. Yet, there’s no follow-up to this encounter. In fact, Kyle’s brother isn’t referenced at all after this scene. It’s one of the strongest and best acted PTSD scenes of the entire movie, yet it’s dropped and ignored after the scene ends.

Bradley Cooper earned an Oscar nomination for his role as Chris Kyle in this movie and I don’t really understand why. The moments that should bring out the most emotion from Kyle are met with more subtlety than needed by Cooper. Moments where he reacts to a noise at home rely on audio cues than on any emotion Cooper gives us.

Cooper’s performance in the war sequences seem hampered by what I can only describe as the movie bending over itself to depict Kyle as humbling, stoic and generally heroic. By no means is that an indictment on Chris Kyle’s character. However the tone the movie hits with its depiction of Kyle feels hollow and, at times, disingenuous.

Sienna Miller’s performance falls victim to a script that carves her character into little more than a plot device. In an Oscar season rife with controversy over a lack of diversity in its nominees, Miller’s performance as Taya reinforces the fact that strong female roles are hard to come by.

Taya is the sounding board for military wives struggling to comprehend what drives their spouses to return to a war zone. Yet, throughout the movie’s entirety there’s a noticeable disconnect in Miller’s performance. Taya isn’t a fully realized character because she’s solely reactionary to Kyle’s story. The scene where they first meet in a bar is the only instance where Taya is given any substance and, much like Keir O’Donnell’s role later, it’s ultimately abandoned. 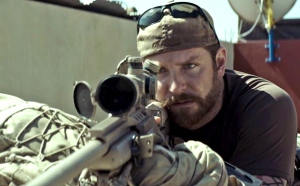 Even though Taya and Kyle’s relationship hits an emotional climax in the climactic war scene, there’s a scene midway through the movie where Taya listens as Kyle is in the midst of an intense battle. Here Eastwood chooses to intercut the war scene with reaction shots of Miller’s horrified reactions. The effect is nearly laughable because the two scenes could not fit together less. Jumping back and forth severely hampers the tension and shines a spotlight on the utter lack of material Miller has to work with throughout American Sniper.

Eastwood handles the end of Chris Kyle’s story in as respectful a manner as possible. However, given that PTSD played such an integral part in Kyle’s life and the lives of people around him, I can’t help but feel the effects of PTSD should have been front and center in American Sniper. It’s touched on throughout the movie but it’s ultimately secondary to the story (and at times glorification) of Chris Kyle. In the end it feels like a squandered opportunity to say something substantial about something that affects so many people.

American Sniper failed to connect with me on a variety of levels. This was mostly due to the fact that it presents multiple layers to its story without fully realizing any of them. Clint Eastwood’s latest movie is victimized by a distinct lack of focus. It’s ultimately a perfectly mediocre modern war movie that became just a little too wrapped up in itself to become anything worthwhile.

Worth a Trip to Red Box – May not be worthy of your home collection, but worth the effort it takes to travel to your nearest Red Box kiosk.